Anders Lee and Brock Nelson scored 62 seconds apart early in the second period and rookie Ilya Sorokin made 24 saves as the New York Islanders defeated the Buffalo Sabres 5-2 on Sunday for their fifth straight win.

The victory was the Islanders’ sixth straight over the Sabres this season.

Casey Cizikas increased the lead to 3-0 at 16:56 with his fourth goal. Cal Clutterbuck, who also scored in Saturday’s 5-2 win over the Sabres, added his third of the season. Nelson scored his second of the game and ninth of the season into an empty net at 17:48 to complete the scoring. 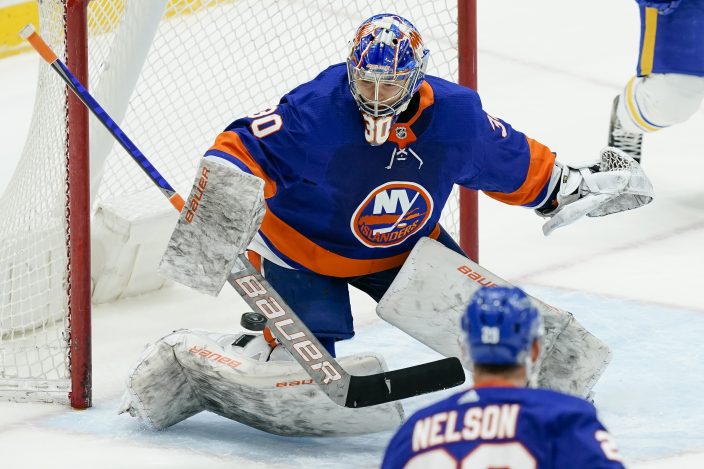 New York Islanders goaltender Ilya Sorokin (30) makes a save during the third period of an NHL hockey game against the Buffalo Sabres, Sunday, March 7, 2021, in Uniondale, N.Y. (AP PhotoJohn Minchillo)

Sorokin, the 25-year-old netminder, earned his fourth win of the season as the Islanders improved to 10-0-2 at Nassau Coliseum. Jeff Skinner’s goal at 5:41 of the third period ruined his shutout bid.

Colin Miller also scored for the Sabres, who are 2-10-1 since a forced two-week delay in their season during early February because of COVID-19 protocols.

The Lightning improved to 3-0-1 on their season-long six-game trip and stretched their point streak to a season-high eight games. They took two of three in the series between Central Division contenders.

Mattias Janmark had a goal and an assist for the Blackhawks. Philipp Kurashev and Pius Suter also scored.

David Pastrnak had a goal and two ...