Scott Wedgewood made 40 saves, Kyle Palmieri scored out of a scramble with 4:37 left and the New Jersey Devils snapped a five-game losing streak with a 1-0 victory over the Boston Bruins on Sunday.

Boston goaltender Tuukka Rask made 24 saves and remained stuck at 299 career victories. The Bruins have lost four of six games.

All four games between the teams have been decided by one goal, including one in overtime and another by a shootout. 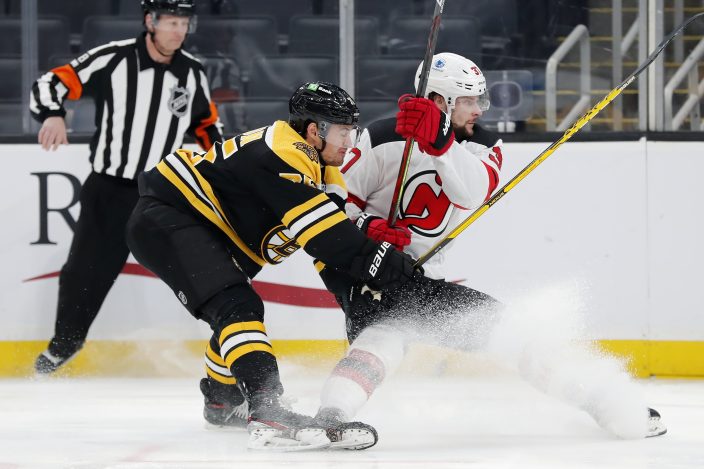 Palmieri scored about two minutes after Wedgewood robbed Craig Smith’s bid at the end of a Bruins’ power play. Wedgewood came out to cut down the angle on Smith's shot from the right circle.

Boston pulled Rask and had the puck in the Devils’ zone for nearly all of the final 90 seconds, but Wedgewood blocked several good chances to preserve his fourth career shutout.

Coming off a pointless, five-game homestand that closed with a sloppy 6-3 loss to the Rangers on Saturday, the Devils looked determined and disciplined from the start, bottling up the neutral zone and limiting Boston’s chances. 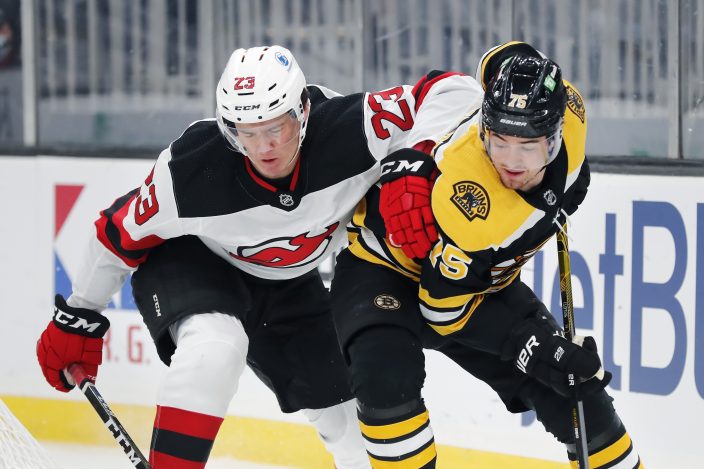 Wedgewood made two nice stops on David Pastrnak; the second came with 4 ½ minutes left in the second period when the star forward shifted around defenseman Sami Vatanen and fired a wrister from the slot that the netminder stopped with his right pad.

In the opening period, Wedgewood slid across the crease to rob Pastrnak’s close bid from near the left post after he collected a pass from Charlie McAvoy.

New Jersey looked for long, breakout passes in the second period and nearly converted when Pavel Zacha went in on a semi-breakaway, but he had his backhander turned aside by Rask’s left-pad save.

New Jersey had two power-play opportunities in the opening period but was limited to a few relatively harmless shots.

Devils coach Lindy Ruff had his team watch video Sunday morning of their loss to the Rangers.

“Today was all video, all review, all real hard honestly about how poorly we played,” he said during a pregame videoconference. “Those meetings are 95% head coach because ultimately I feel responsible for how the team played. That’s on me.”

Boston coach Bruce Cassidy said Sunday morning that defenseman Brandon Carlo “is feeling better” and home after a head hit into the glass by Washington’s Tom Wilson sent him to the hospital in an ambulance Friday night.

“He’s obviously going to be out for a while,” Cassidy said.

Wilson was suspended seven games by the league.

Devils: At the Capitals on Tuesday night, the second of a three-game road trip.

Bruins: At the Islanders Tuesday. Boston has lost all three meetings against them this season.