The Champions League talking points ahead of the first set of second-leg matches in the round of 16 on Tuesday and Wednesday:

Álvaro Morata is finding his best form at the right time for Juventus. Morata had not scored in the league since December and was sidelined recently with illness but the Juventus forward has scored three times in his last two matches -- including in Saturday’s 3-1 win over Lazio. Morata has scored six goals in this season’s Champions League, two more than teammate Cristiano Ronaldo. The 36-year-old Ronaldo was given some much-needed rest at the weekend and went on only for the final 20 minutes, which should leave him fresh for Tuesday's match against Porto. Juventus has been dealing with illness and injuries. Coach Andrea Pirlo hopes Giorgio Chiellini and Matthijs de Ligt will recover in time to play Porto. Forward Paulo Dybala is still sidelined, while Rodrigo Bentancur is also out after contracting the coronavirus. Porto also has some injury problems, including defender Pepe with a right leg ailment. 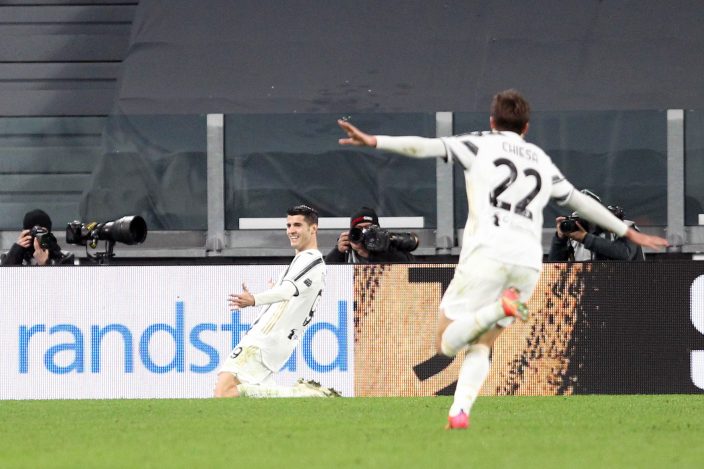 Borussia Dortmund’s 4-2 loss to Bundesliga rival Bayern Munich at the weekend could leave its mark for Tuesday’s visit from Sevilla. Star striker Erling Haaland, who scored twice in Dortmund’s 3-2 win over Sevilla in the first leg, was taken off early with stud marks on the back of his right ankle after a nasty challenge from Jérôme Boateng. Although Haaland told Dortmund coach Edin Terzić “it wouldn’t be a big problem.” The loss in Munich marked the end of Dortmund’s four-game winning run across all competitions. The team was without Jadon Sancho, Raphaël Guerreiro and Gio Reyna. All three face a race to be fit for Tuesday. Sevilla has been struggling since the first-leg loss to Dortmund, losing three of its four matches since then. It is coming off a loss to relegation-threatened Elche in the Spanish league, and was eliminated by Barcelona in the semifinals of the Copa del Rey despite a 2-0 first-leg win. 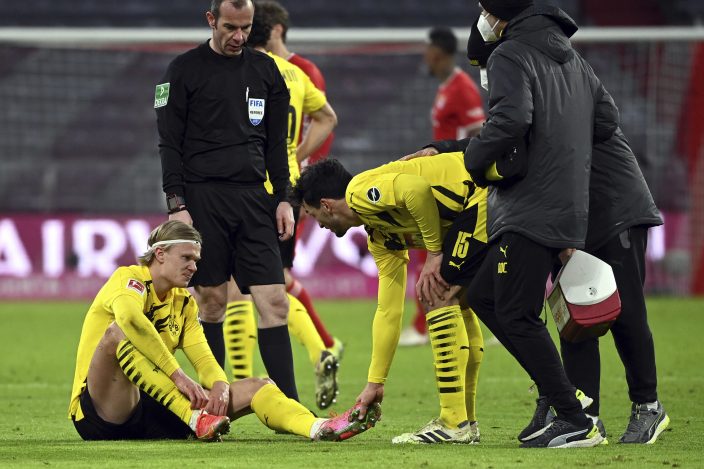 Dortmund striker Erling Haaland sits on the pitch during the German Bundesliga soccer match between Bayern Munich and Borussia Dortmund at the Allianz Arena in Munich, Germany, Saturday, March 6, 2021. (Sven HoppePool via AP)

Barcelona seems like a different team to the one which played so badly in the second half at home to PSG. Ronald Koeman’s lineup is 16 games unbeaten in the league and the defense appears to be considerably stronger now that he has ditched the ineffective 4-3-3 formation for a 3-5-2 system which offers his central defenders more protection. Veteran defender Gerard Pique is a doubtful starter for the game, however, after hurting his knee midweek. A lot will rest Wednesday on Barça’s French defenders Clement Lenglet and Samuel Umtiti, with PSG is almost at full strength. Goal-scoring winger Angel Di Maria is back from injury and Neymar is close to a return after getting back to training. PSG coach Mauricio Pochettino may see no valid reason to drop the 4-2-3-1 formation which worked so well in Spain, with Kylian Mbappe helping himself to three goals despite playing wide and not as the central striker. Even though PSG defends a big lead at Parc des Princes, there may be some nerves about facing Lionel Messi in top form once again. PSG went out after losing 6-1 in Spain in 2017 having won the home leg 4-0. But this Barcelona lineup is not as strong as the 2017 squad, and PSG is more resilient now.

The teams return to neutral territory at the Puskas Arena in Budapest with Liverpool's two-goal cushion perhaps not as commanding as it seems given the team's recent problems, particularly in its injury-hit defense. The pressure is on the soon-to-be-deposed English champions because winning the Champions League might be the most likely route back into the competition for next season. Juergen Klopp's squad currently sits outside the Premier League's top four. Leipzig is on a six-game winning run in the Bundesliga and briefly took over top spot on Saturday. Leipzig coach Julian Nagelsmann omitted Angeliño from the team that beat Freiburg 3-0, but dampened hopes the Spanish winger will return in time for Liverpool. Uncharacteristic defensive lapses helped Liverpool in the first leg. The game is again taking place in the Hungarian capital due to German restrictions on visitors amid the coronavirus pandemic. 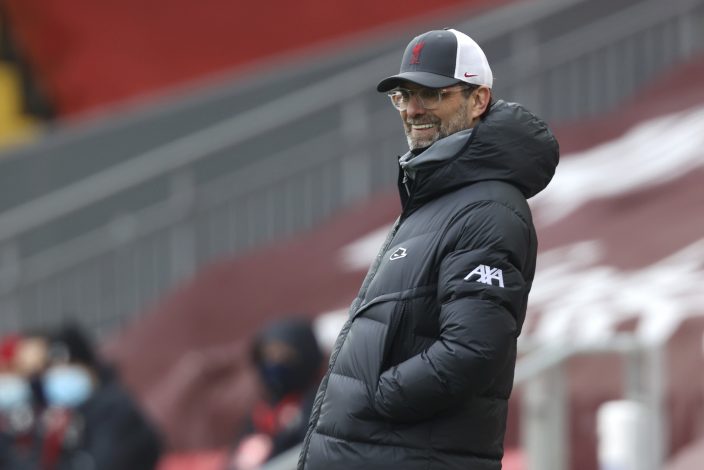