Pittsburgh allowed an early three-goal lead to slip away in a loss to Philadelphia earlier in the week. The Penguins didn’t make the same mistake Sunday against the New York Rangers.

Sidney Crosby capped Pittsburgh’s three-goal outburst in the first period, and the Penguins beat the Rangers 5-1.

Crosby scored his eighth of the season, Kasperi Kapanen netted his sixth, and John Marino his first as Pittsburgh scored three goals on six shots in the opening period. 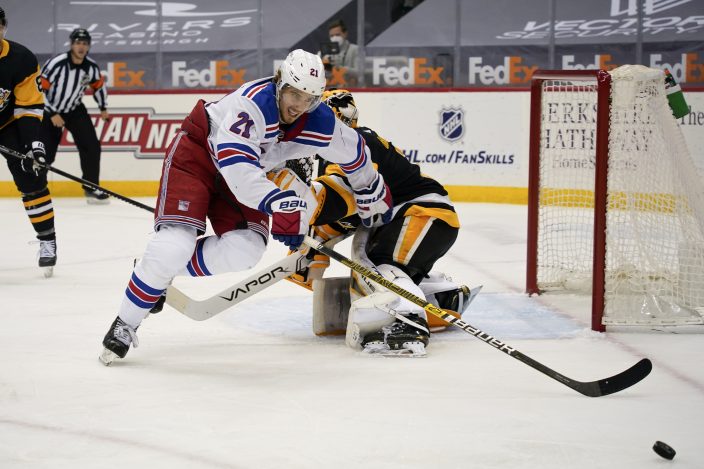 New York Rangers' Brett Howden (21) tries to get to the puck in front of Pittsburgh Penguins goaltender Casey DeSmith (1) during the second period of an NHL hockey game, Sunday, March 7, 2021, in Pittsburgh. (AP PhotoKeith Srakocic)

“We don’t want to be a team that sits on leads,” Penguins coach Mike Sullivan said. “We’re at our best when we continue to score. I thought we did a better job of managing the game.”

Evgeni Malkin and Zach Aston-Reese scored in the third period as the Penguins won for the ninth time in 13 games. Casey DeSmith made 22 saves in his second start since Feb. 11.

Pittsburgh, which recently took two of three from Philadelphia in the highly competitive East Division, have eight wins and points in 11 of their last 12 games against the Rangers. 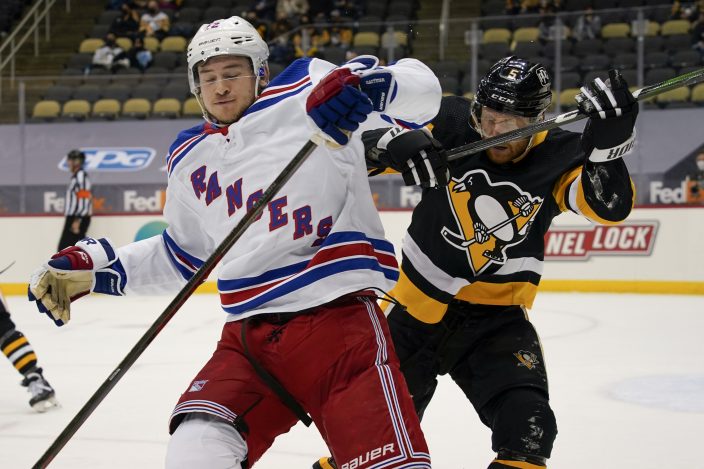 “We beat a pretty good Philadelphia Flyers team after a disappointing game,” Sullivan said. “I like the traction our team is getting as of late. We’re trying to learn through our experiences.”

Mika Zibanejad scored his third of the season for the Rangers, who had their season-best three-game winning streak halted.

Alexandar Georgiev started the game in net for the Rangers, but was pulled after allowing three goals on six shots. Keith Kinkaid made 16 saves in his first NHL action since Nov. 30, 2019. Igor Shesterkin remains day-to-day with a groin injury. 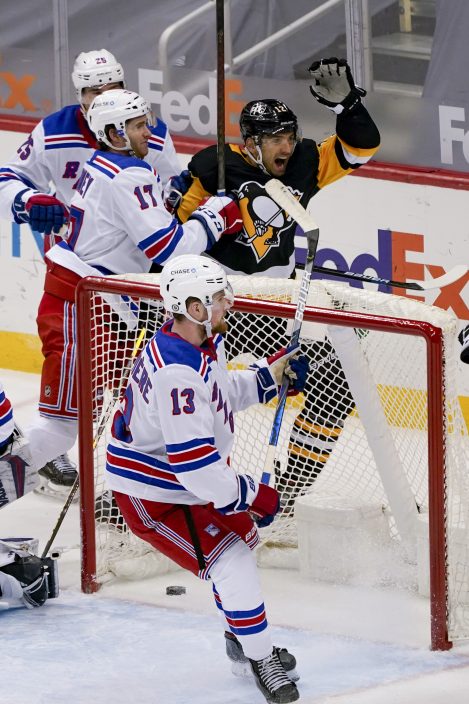 Pittsburgh Penguins' Zach Aston-Reese (12) celebrates after he scored against the New York Rangers during the third period of an NHL hockey game, Sunday, March 7, 2021, in Pittsburgh. (AP PhotoKeith Srakocic)

“I thought we played well up until (Pittsburgh’s) first goal,” Rangers’ coach David Quinn said. “It’s disappointing because I thought we got off to a really good start.”

Zibanejad scored at 1:18, on the first shot of the game, but Pittsburgh closed the first with a three-goal flurry in just 1:01 to open a 3-1 lead.

Marino tied the game at 16:13 with his first goal since March 3, 2020, and Kapanen gave Pittsburgh the lead 39 seconds later on a breakaway. Kapanen has points in six of his last eight games against the Rangers. Crosby split a pair of New York defensemen 22 seconds later and chased Georgiev from the game with a glove-side wrist shot.

“We just tried to keep putting pucks behind them and applying pressure,” Kapanen said. “The game against Philly, we kind of let our foot off the gas, but we played a solid 60 minutes (Sunday) and it showed.” 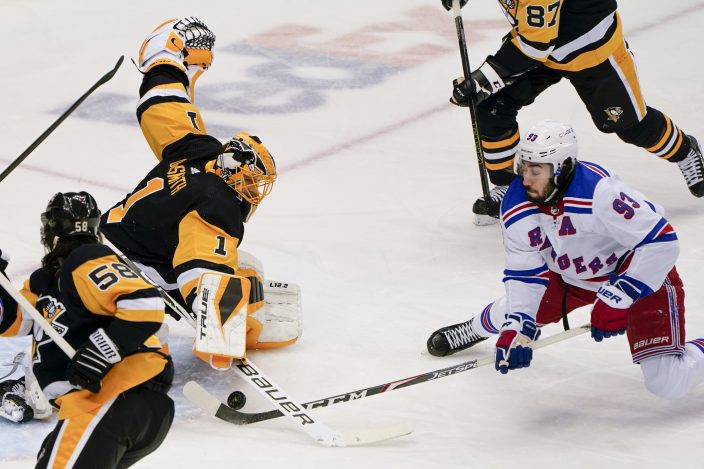 Sunday’s game against the Rangers was the second time in three games that Pittsburgh scored three first-period goals in less than 90 seconds.

Pittsburgh scored three times in 1:11 on Thursday at home against Philadelphia. But the Flyers overcame the early deficit and rallied to stun the Penguins with a 4-3 win.

The Penguins were able to hold on following their three-goal, 61-second first-period outburst on Sunday against the Rangers. But it didn’t come without tense moments, after Zibanejad missed an open net and hit a post in the second period, which would’ve made it a one-goal game. Pittsburgh also failed to capitalize on two second-period power plays, keeping it close. “Every win in this league is difficult,” Sullivan said. “We’re trying to find different ways to win and we just have to continue to do that. We can’t dwell on any one circumstance, whether it’s positive or negative. We have to move by it and get ready for the next one.”

Penguins’ F Jared McCann left Sunday’s game with about five minutes to play in the second period and did not return. Sullivan said he was being evaluated for an upper-body injury. 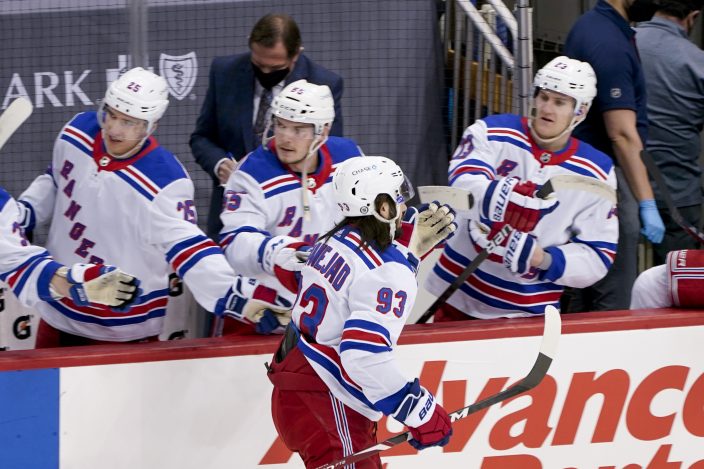 New York Rangers' Mika Zibanejad (93) celebrates with teammates on the bench after scoring against the Pittsburgh Penguins during the first period of an NHL hockey game, Sunday, March 7, 2021, in Pittsburgh. (AP PhotoKeith Srakocic)

McCann, who scored the game-winning goal Saturday against Philadelphia, entered Sunday’s game on a three-game point streak. He had four points in five games and returned to the lineup on Feb. 27 after missing seven games with a lower-body injury.

“It’s discouraging to see Jared go down,” Sullivan said. “Hopefully, it’s something that won’t be too long. We’re hopeful that we’ll get some positive news.”

Rangers’ D Jacob Trouba returned to the lineup on Sunday after missing eight games with a broken thumb. Jack Johnson, who spent the last two seasons with Pittsburgh, was scratched.

Trouba, a first-round pick in the 2012 NHL Entry Draft, last played during a Feb. 16 home loss against the New Jersey Devils. The 27-year-old defenseman, who was initially expected to miss four-to-six weeks, had a secondary assist on Zibanejad’s game-opening goal. He has four assists in 15 games this season.

“Obviously, with breaks, it takes a little time to get back, but I thought we played a pretty solid first period as a team,” Trouba said. “Kind of had a bad stretch in two minutes and it cost us.”

Pittsburgh concludes a five-game homestand on Tuesday against the Rangers. Pittsburgh is scheduled to play 12 home games in March, most in a calendar month in franchise history and second-most in NHL history. The Rangers are in the midst of a six-game trip.