Many years later, looking at the glittering trails of Qixingling Ski Resort, Xie Zhiping recalls the swathes of azaleas flowing through mountains every spring of his childhood.

The green mountains have never changed, but with the beauty of white snow decorating the top of the mountains every winter, Qixingling has become a household name for ski lovers nationwide. 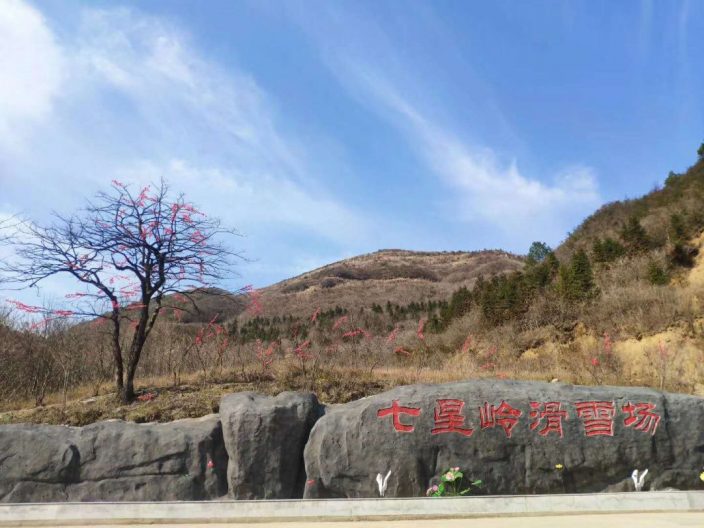 Qixingling, located in Tonggu County in east China's Jiangxi Province, is known for its evergreen vegetation all year round and gurgling mountain streams. However, it is hard to marry lucid waters and lush mountains with ski resorts in one's imagination at first sight.

Born and bred in Paibu Town at the foot of the mountains, Xie was the person who waved the magic wand.

In 2016, Xie, a sports enthusiast himself, took his family to Daweishan Ski Resort in Liuyang, in neighboring Hunan Province, and experienced the joy of skiing for the first time.

"At that time, I thought our town was similar to Liuyang's geographical conditions, so maybe we could build a ski resort in the mountains of our hometown as well," said Xie, adding that in this way, fellow ski fanatics could enjoy the sport without leaving the province.

Xie, along with five of his countrymen, started devising the construction plan. Although some thought his idea was unrealistic, he did win the support of Luo Zhaoming, the then-party branch secretary of Paibu Village. 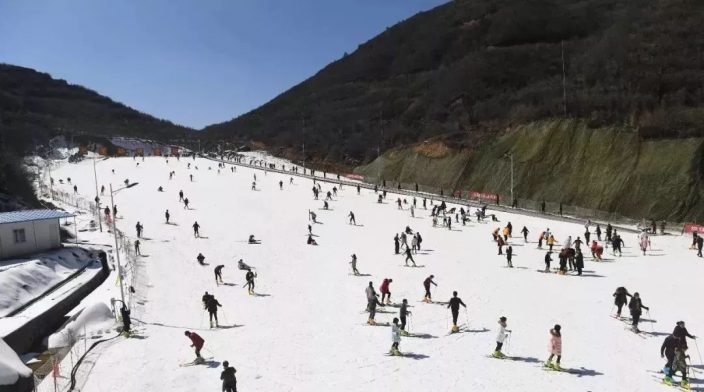 "The mountains in the village are deserted. If we can use them properly, we may be able to create our own industry," Luo said. With the help of more than 20 other villagers, they raised nearly 20 million yuan (3.1 million U.S. dollars) and began breaking ground.

Starting from scratch was by no means easy, but Xie and his partners were never afraid of the learning curve.

Not knowing how to build a ski resort, they went to northern China to study. With little knowledge of running it, they hired professional ice and snow sports companies. In winter, they manage the resort scientifically according to the temperature of the mountain area to improve fans' experience.

"A few months before the trial operation in 2017, I lived in the mountains all day long. Frankly speaking, I was under huge pressure because I did not want my fellow villagers to lose money," said the 45-year-old.

His relentless efforts paid off in 2017 when a 26,000-square-meter ski resort was completed in a U-shaped valley. The resort attracted thousands of tourists once it opened for business. In order to ensure traffic safety, Xie sent 50 employees to take care of the 5-kilometer road to the top of the mountain.

In 2018, the start of the "300 million people's participation in the ice and snow campaign" prior to the 2022 Winter Olympic and Paralympic Games in Beijing further boosted the confidence of Xie and his colleagues. "Our country encourages the popularization of snow and ice sports, and we have definitely taken the right path."

The infrastructure of the resort was upgraded during the 2018-19 ski season. During the 78-day business period of that year, it received 61,600 tourists and achieved an operating income of 12.2 million yuan (1.89 million U.S. dollars). In the following two years, the number of tourists to the resort reached at least 40,000 every year.

With the increasing popularity of the resort, many villagers nearby who left home for big cities came back. So far, more than 50 villagers can earn money on their home soil every winter.

Villagers are not the only group coming back. At the tail end of November every year, over 40 ski coaches travel thousands of kilometers from the very north of the country to the resort to make a living. Li Naikun is one of them.

The strong ultraviolet rays in the mountains, coupled with long-term outdoor teaching, have left sunburn marks on his face, which can be clearly seen when he takes off his goggles. He usually takes three hours of classes every day in the 90-day skiing season, earning about 30,000 yuan (4,644 U.S. dollars) during the period.

"Because of the promotion of ice and snow sports, we have more job opportunities now," said Li, adding that in the past five years, he witnessed the changes of skiers from experiencing the sport to advancing their skills.

Local farmers also benefit from the development of the resort. Ou Daimei, a 56-year-old villager, opened a restaurant on her doorstep. During the three months of ski resort operation, she was very busy every day and can make up to 1 million yuan (154,800 U.S. dollars).

During the 2020-21 winter season, China is expected to have 230 million ice and snow tourists with tourism revenue of 390 billion yuan (60.37 billion U.S. dollars), according to a report released by the China Tourism Academy in January.

German soccer teams will be confin ...

A group of Manchester United fans ...