Hungarians on Monday awoke to a new round of strict lockdown measures aimed at slowing a record-breaking wave of COVID-19 hospitalizations and deaths that are among the worst in the world.

A rapid rise in pandemic indicators since early February prompted Hungary's government to announce the new restrictions, including closing most stores for two weeks and kindergartens and primary schools until April 7. Most services are also required to cease operations, and the government urged businesses to allow employees to work from home. Grocery stores, pharmacies, gas stations and tobacconists can stay open.

Hungary's high schools have been remote learning since November and its bars, restaurants and gyms have been closed since then as well. 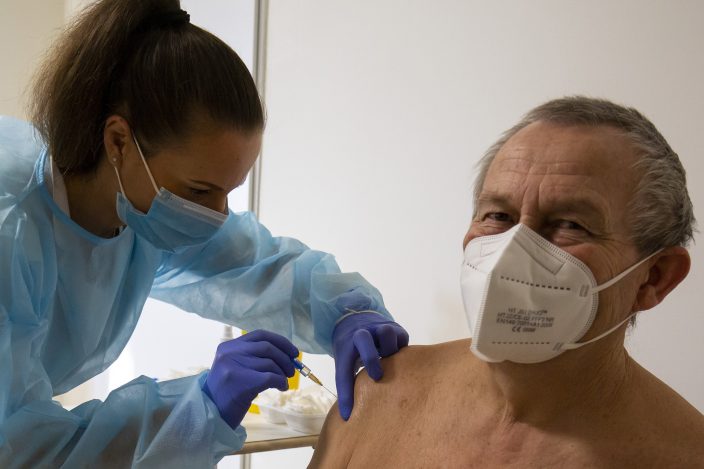 FILE - In this file photo taken on Friday, Feb. 19, 2021, Nurse Szilvia Lukacs administers a shot of the Russian vaccine Sputnik V to a patient at Zala County Szent Rafael Hospital in Zalaegerszeg, Hungary, as the vaccination with Sputnik V against the new coronavirus continues in the country. Russia’s boast in August that it was the first country to authorize a coronavirus vaccine led to skepticism because of its insufficient testing on only a few dozen people. Now, with demand growing for the Sputnik V, experts are raising questions again, this time over whether Moscow can keep up with all the orders from countries that want it. (Gyorgy VargaMTI via AP, File)

Hungarian Prime Minister Viktor Orban has warned that the strain on the country's hospitals will soon surpass any other period in Hungary since the pandemic began, and that failing to impose harsher restrictions now would result in a “tragedy.”

“The next two weeks will be difficult ... but if we want to open by Easter, we’ve got to close down,” Orban said Friday on a Facebook video.

The number of patients on ventilators in Hungarian hospitals has more than doubled in the last two weeks, with 806 patients on Monday compared to the previous peak of 674 in early December. 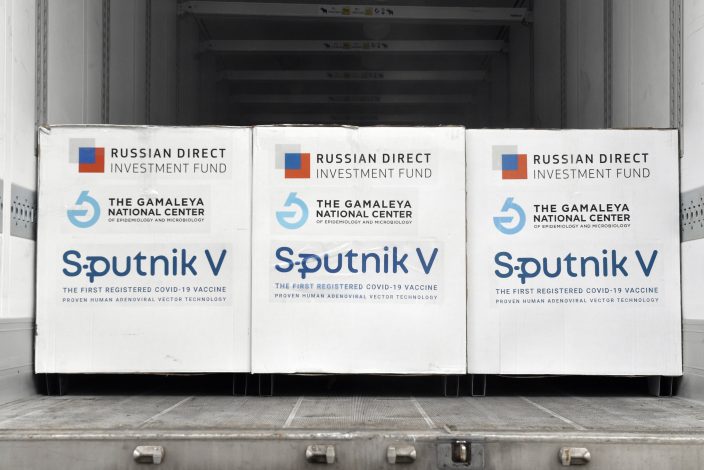 Boxes of Sputnik V vaccines are ready to be unloaded from a truck at a warehouse of Hungaropharma, a Hungarian pharmaceutical wholesale company, in Budapest, Hungary, Thursday, March 4, 2021. (Zoltan MatheMTI via AP)

Deaths have also risen sharply. With nearly 16,000 confirmed deaths in a country of fewer than 10 million, Hungary has the 8th worst death rate per 1 million inhabitants in the world, according to Johns Hopkins University. The number of COVID-19 patients being treated in hospitals is also likely to break its previous record on Tuesday.

“We can see that the third wave is spreading very forcefully, mainly due to (virus) variants,” Hungary’s chief medical officer Cecilia Muller said Sunday. “We can’t do anything else now but break the chain of infections.”

The new restrictions came as many Hungarian businesses were already struggling to make ends meet as shoppers stayed at home amid the surging cases. Zoltan Suto, the founder and owner of Hungarian fashion brand Griff Collection, said revenues were down 70% through the winter thanks to cautious consumers avoiding crowds at shopping malls. 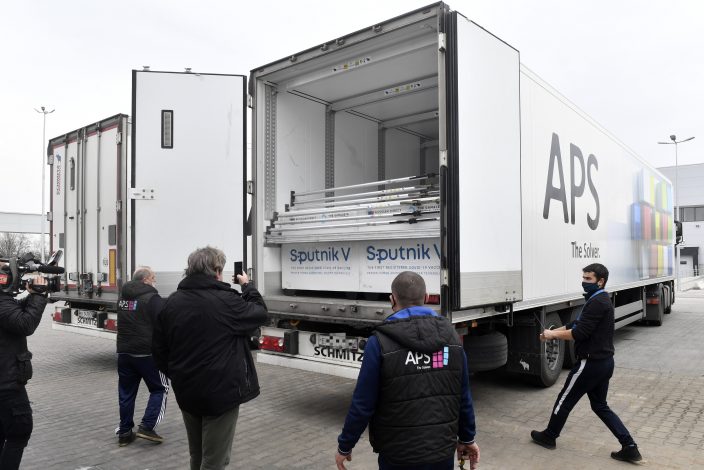 Boxes of Sputnik V vaccines are unloaded from a truck at a warehouse of Hungaropharma, a Hungarian pharmaceutical wholesale company, in Budapest, Hungary, Thursday, March 4, 2021. (Zoltan MatheMTI via AP)

“I can't pay rent. I can't pay salaries or social contributions, not to mention the taxes,” Suto said, adding that a 50% commercial tax break offered by the government meant little in the absence of revenues.

Last year's pandemic-induced economic recession, which saw a 5.1% decrease in Hungary's GDP, led to the shuttering of five of Griff Collection's 10 stores in Hungary, which employ around 80 people. Suto says his business suffered a loss of 200-300 million Hungarian forints ($645,000-$968,000) in 2020, and that the crisis will only deepen if the two-week closure that begins Monday is extended further.

Such economic pain has made Hungary's government, which is facing an election next year, reluctant until now to introduce restrictions on businesses, even as COVID-19 cases and deaths have skyrocketed since early February. 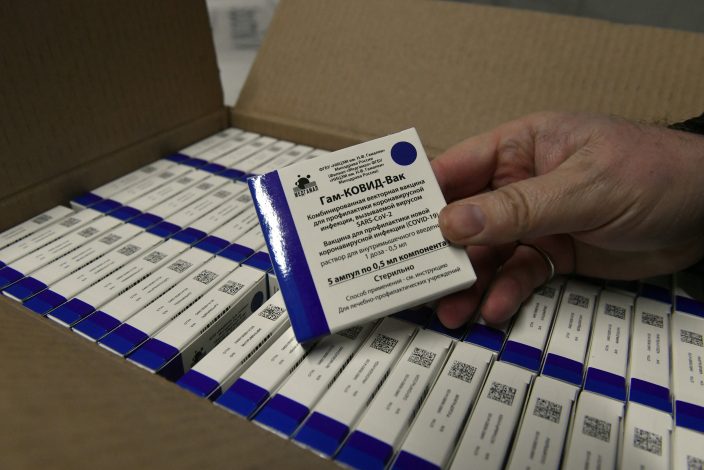 Boxes of Sputnik V vaccines at a warehouse of Hungaropharma, a Hungarian pharmaceutical wholesale company, in Budapest, Hungary, Thursday, March 4, 2021, after a shipment of 280,000 doses of the Russian vaccine Sputnik V arrived in Hungary. (Zoltan MatheMTI via AP)

Many parents scrambled over the weekend to alter work schedules and arrange for childcare, including Gyongyver and Szilard Brasnyo, a couple in Budapest who have two young daughters.

“We are lucky, my parents are coming over to help us out with the kids,” said Gyongyver, adding that her parents live in Serbia, which has one of the highest vaccination rates in Europe, and have already received two vaccine shots.

Szilard, who works from home, said they felt “exhausted” after a year of raising the children during a pandemic. But he was optimistic that Hungary's ambitious vaccination program - which has given more than 1 million Hungarians a vaccine shot, the second-highest vaccination rate in the 27-nation European Union — would soon bring life back to normal.

Employees unload the newly arrived coronavirus vaccines from Chinese pharmaceutical company Sinopharm at the logistics base set up to in the parking lot of the government office in the 13th district of Budapest, Hungary, March 3, 2021. (Zsolt SzigetvaryMTI via AP)

Hungary has obtained vaccines from Russia and China as well as those approved by the EU.

“We're really looking forward to having a much safer environment for all of us," Szilard said. 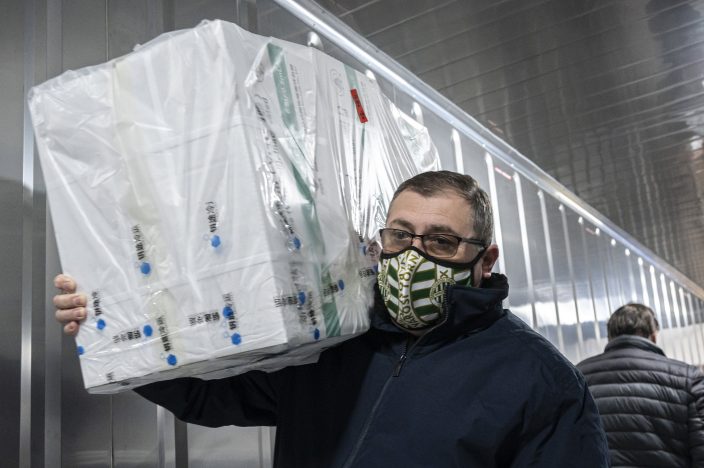 Employees unload the newly arrived coronavirus vaccines from Chinese pharmaceutical company Sinopharm at the logistics base set up to in the parking lot of the government office in the 13th district of Budapest, Hungary, March 3, 2021. (Zsolt SzigetvaryMTI via AP)