A sweeping bill that would extend federal civil rights protections to LGBTQ people is a top priority of President Joe Biden and Democrats in Congress. Yet as the Equality Act heads to the Senate after winning House approval, its prospects seem bleak — to a large extent because of opposition from conservative religious leaders.

The public policy arm of the Southern Baptist Convention, the nation’s largest Protestant denomination, calls the act “the most significant threat to religious liberty ever considered in the United States Congress.” The U.S. Conference of Catholic Bishops has assailed it as discriminating against people of faith.

The act is the latest version of proposals previously introduced Congress without success. It would amend existing civil rights law to explicitly cover sexual orientation and gender identity, with protections extending to employment, housing, education, and public accommodations such as restaurants, theaters, hotels, libraries, gas stations and retail stores. 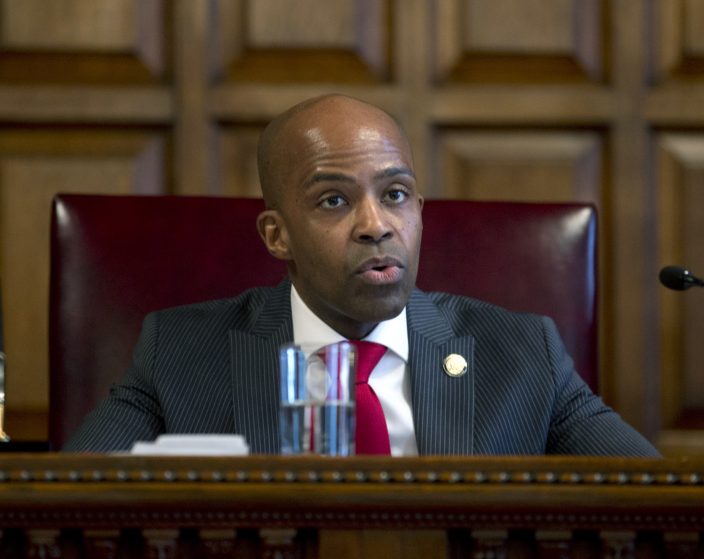 FILE - In this April 25, 2016 file photo, Alphonso David speaks during a swearing-in ceremony at the Court of Appeals in Albany, N.Y. In 2021, LGBTQ activists view opposition to the Equality Act that would extend federal civil rights protections to LGBTQ people, as a consequence of longstanding hostility to their community’s advances, such as the legalization of same-sex marriage and the growth of a transgender rights movement. David, an attorney who heads the Human Rights Campaign, a national LGBTQ-rights organization, says, “Our opponents are seeking to expand religious exemptions and create a second class of citizens. ... In their narrative I could walk into a store as a Black man and not face discrimination, but walk in as a gay man and get thrown out." (AP PhotoMike Groll, File)

The bill maintains longstanding exemptions for houses of worship and other religious institutions — for example, they could limit employment to people who shared their faith’s beliefs and could refuse to perform same-sex marriages.

But faith-based homeless shelters and adoption or foster-care agencies that receive federal funding would not be permitted to discriminate against LGBTQ people. And it would be more difficult for a wide range of businesses to justify anti-LGBTQ discrimination, regardless of personal or religious beliefs.

“It will be very difficult for Christian schools, Christian colleges, even in some cases for the ministries of Christian churches to proceed,” the Rev. Albert Mohler, president of the Southern Baptist Theological Seminary, said in a recent radio broadcast. “This will change not just a few things, it will fundamentally change almost everything on the nation’s landscape.” 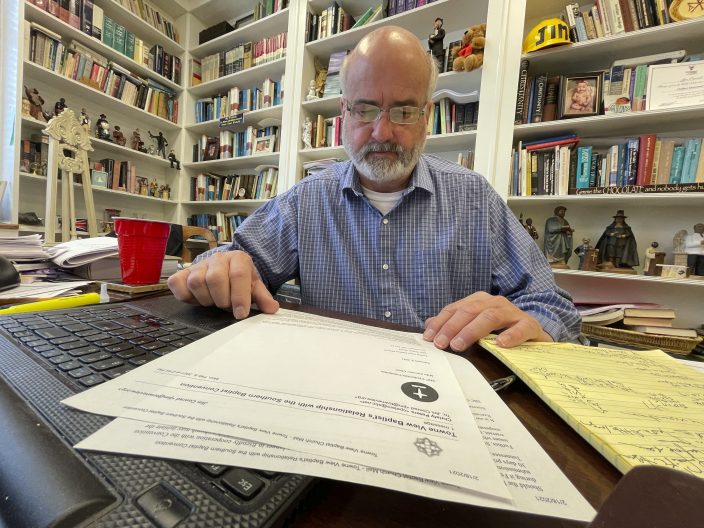 FILE - In this Thursday, Feb. 18, 2021 file photo, Jim Conrad, pastor of Towne View Baptist Church, looks at a copy of a letter from the Southern Baptist Convention's credentials committee, in Kennesaw, Ga. During an SBC meeting in late February, its executive committee ousted the church because it accepted LGBTQ people into its congregation. The public policy arm of the SBC, the nation’s largest Protestant denomination, calls the Equality Act that would extend federal civil rights protections to LGBTQ people, “the most significant threat to religious liberty ever considered in the United States Congress.” (AP PhotoAngie Wang)

LGBTQ activists view the opposition to the bill as a consequence of longstanding hostility to their community’s advances, such as the legalization of same-sex marriage and the growth of a transgender rights movement.

“Our opponents are seeking to expand religious exemptions and create a second class of citizens,” said Alphonso David, an attorney who heads the Human Rights Campaign, a national LGBTQ-rights organization.

“In their narrative I could walk into a store as a Black man and not face discrimination, but walk in as a gay man and get thrown out," David said.

There is no date yet for when hearings will begin in the Senate, where by rule the bill would need 60 votes to pass. So far no Senate Republicans are endorsing the bill.

Sen. Susan Collins of Maine was the lone Republican co-sponsor when the legislation reached the Senate in 2019, but she has withdrawn that endorsement because revisions she hoped for were not made. Another relatively moderate Republican, Sen. Mitt Romney of Utah, says he can’t support the bill because it would “inappropriately threaten fundamental religious liberties.”

U.S. Rep. Chris Stewart, a Utah Republican, has introduced a similar bill in the House, the Fairness for All Act, supported by such entities as the Council for Christian Colleges and Universities and The Church of Jesus Christ of Latter-day Saints. Romney says he would consider it if it reaches the Senate, but it is staunchly opposed by LGBTQ activists and congressional Democrats, who view the religious exemptions as too broad.

“That bill is unacceptable because it creates two tiers of civil rights protections and sanctions discrimination against LGBTQ people in homeless shelters and foster care agencies,” David said.

Jennifer Pizer, director of law and policy for the LGBTQ rights organization Lambda Legal, said she expects “intense conversation and negotiation” in the Senate over the different approaches of the Equality Act and the Fairness for All Act.

For many religious leaders, the Equality Act's codification of civil rights protections for transgender people is of particular concern.

The act “denies the biblical truth that people were created in two, distinct God-given genders,” wrote Ryan Fullerton, pastor of Immanuel Baptist Church in Louisville, Kentucky, in a commentary last week. If it passes, he said, “our God will be offended by this great evil."

The Catholic bishops conference, for its part, said in a statement that the bill “codifies the new ideology of ‘gender’ in federal law, dismissing sexual difference and falsely presenting ‘gender’ as only a social construct.”

The bishops also contend it would require Catholic health care workers to support treatments and procedures associated with gender transition even if that went against their beliefs.

Some Catholic activists were dismayed by the bishops’ statement.

“I found it shockingly harsh and not at all in keeping with what Jesus and the Gospels are about,” said Sister Simone Campbell, executive director of NETWORK Lobby for Catholic Social Justice. “It is the antithesis of the teaching of Pope Francis, who says we should ground our policies in the experience of those at the margins of society.”

The Rev. James Martin, a Jesuit priest who advocates for greater LGBTQ inclusion in the church, said he accepts the need for some religious exemptions.

“But the problem is that if every effort to prevent LGBTQ discrimination is opposed by the Catholic Church because it supposedly ‘redefines gender,’ then no efforts will be supported whatsoever," Martin said. “The question the church must ask itself is: When will we stand up against the real-life discrimination — the violence, harassment and bullying — that LGBTQ people encounter?”

Some Catholics also worry that by prohibiting discrimination based on sex, the Equality Act could compel doctors and hospitals to provide abortions even if they oppose the procedure.

“I can speak from professional experience as a bioethicist that religious conscience protections are not high in the list of priorities for most of those who have power in medicine,” Charles Camosy, a professor of theological and social ethics at Fordham University, said via email.