Germany has begun ramping up the use of the coronavirus vaccine made by AstraZeneca, after authorities last week gave the green light for it to be administered to people age 65 and over.

Hundreds of thousands of doses have been gathering dust in storage in recent weeks because of the restrictions on who could get the vaccine and misgivings among some of those who were eligible for it. Germany has received 2.1 million doses of the AstraZeneca shot so far, but administered just 721,000, according to the European Center for Disease Prevention and Control.

Last week, the country's independent vaccine committee said new data showed the AstraZeneca vaccine was effective in older groups too, prompting a swift changes of rules by the government, which has come under criticism for the slow rollout of anti-COVID-19 shots compared to Britain and the United States.

A pharmacist takes a swab from a woman's nose in an adjoining room in Hagen, Germany, Monday, March 8, 2021. The free Corona rapid tests for all citizens were initially only offered by a few pharmacies in North Rhine-Westphalia on the launch day because of many unanswered questions. ( Oliver Bergdpa via AP)

A new vaccine center opened Monday at the disused Tempelhof airport in the heart of Berlin will administer only the AstraZeneca vaccine. Starting with 200 appointments, operators of the center hope to rapidly scale up and administer as many as 3,300 shots daily from March 23.

Finance Minister Olaf Scholz told public broadcaster ZDF that he expects Germany to be able to administer up to 10 million shots a week by the end of the month. That would be twice as many as Germany has managed to do since vaccination started at the end of December. 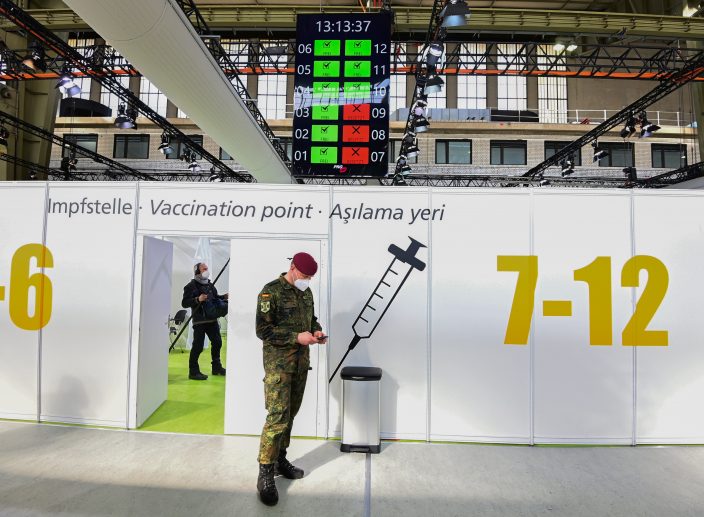 A soldier of the German Armed Forces Bundeswehr stands inside a new vaccination centre at the former Tempelhof airport in Berlin, Germany, before its opening on Monday, March 8, 2021. (Tobias Schwarz Pool via AP)

According to government figures, around 2.5 million people in Germany or about 3 % of the population, have so far received the full two shots.

The push to vaccinate faster comes as Germany takes further steps out of lockdown this week, with more students returning to school and some businesses and cultural venues reopening, albeit only for those who have booked appointments in advance.

Silvia Firat was among the first to get the vaccine at the Tempelhof site. The 40-year-old Firat, who works in elderly care, said she had initial misgivings about the AstraZeneca vaccine after hearing that some recipients develop strong reactions after receiving the shot.

But when she got an invitation, she chose to go ahead with it, partly to set an example for others.

“I can only recommend doing it," Firat said. “Every injection we get has some side effects, some more, some less.”