He'd had a nice first month at his new job, had quickly settled in and was falling into a familiar rhythm. A win was coming, Kyle Larson could feel it, and he was right.

And yet a past mistake remained the dominant narrative of Larson's return to NASCAR.

He wondered via text if a time will ever come when he is mentioned without a reference “about me being indefinitely suspended for the use of a racial slur?” 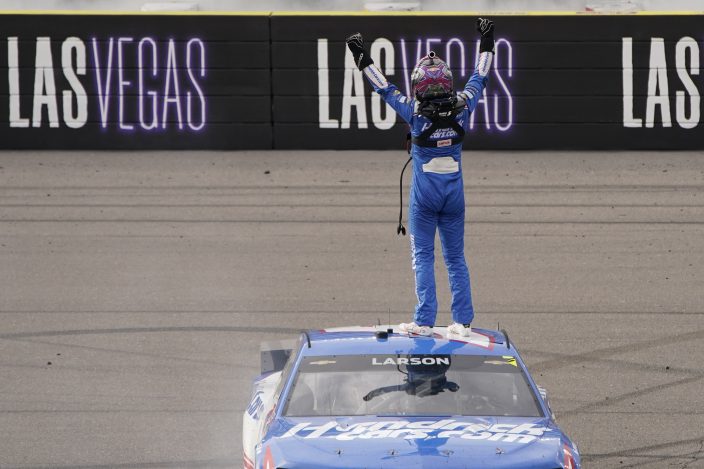 The truth: Probably not, at least for now.

When Larson showed up for the Daytona 500, it was his first race back from a nearly yearlong suspension. When he put together three solid races, it was a strong start with the team that had thrown him a lifeline when he was deemed untouchable by sponsors so critical to running a race team.

And when Larson won Sunday at Las Vegas Motor Speedway, well, it was his first victory on the long road of redemption that stretches to last Easter when he dropped the n-word during an online race. Every single sponsor dropped him within 24 hours, he was fired and he fled with his family back to his home state of California. 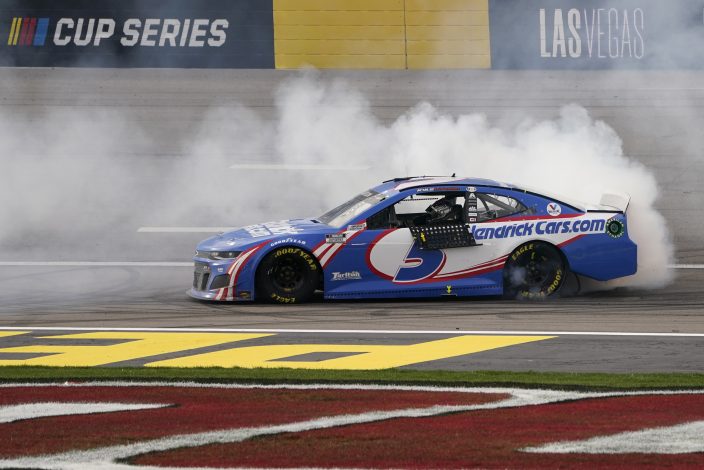 The rebuilding path involved a personal journey for Larson, whose Japanese grandparents where confined to an internment camp during World War II. Larson, despite his own family experience with racism and at nearly 28 years old, was somehow immune, immature and unaware of racial injustices.

He completed the required NASCAR sensitivity training but went far beyond that. On his own and without attention, Larson volunteered with organizations that serve minorities and underprivileged communities while meeting with Black leaders to educate himself.

Larson last week launched The Drive for 5 Campaign, a foundation to benefit children, families and communities in need of support.

Even while banished by NASCAR, the community never turned its back on him. Fellow drivers kept him in their circle of friends and fans still lined up to buy his merchandise at local tracks all across the country.

Rick Hendrick believed in Larson, believed he deserved a second chance and believed he was still a winner. Yes, that is easy to do when a businessman wants to win races.

Hendrick Motorsports is one of NASCAR's elite teams and Larson is considered one of the top raw talents in motorsports. The pairing had the potential to turn Larson into the next Jeff Gordon, and because no one wanted to hire Larson, Hendrick could sign him at a steep discount.

Hendrick would run the car out of his own pocket because he figured Larson would win once in Hendrick equipment. People like winners, and if Larson started winning, Hendrick knew the sponsors would follow.

After Larson climbed from his car Sunday at the finish line, runner-up Brad Keselowski ran across the infield grass and up the track banking to congratulate him.

“I think everybody loves a good redemption story,” Keselowski said later. “He’s fought really hard for his opportunity to come back. I told him I wanted to win the damn race. But if I couldn’t, I’m glad he did. We’ve all been kind of pulling for him.”

When Larson got to victory lane, Bubba Wallace, NASCAR's only Black fulltime driver, was there to shake his hand.

“Told him way to keep his head thru it all! We all knew it was a matter of time,” Wallace wrote on Twitter.

“You got your second chance and absolutely made the most of it!” Lester wrote on Twitter. “Your talent was never in question, only one of your decisions.”

Larson said he “definitely got a little choked up” on the final lap of Sunday's win. He composed himself during his celebratory burnouts and the only emotion he showed when he climbed from the car was joy.

He admitted he didn't know if he'd ever race in NASCAR again, win another race or compete for a championship. And he was beyond grateful to Hendrick for the second chance he's been granted — even if that narrative is not going to go away for a while.

“It’s going to be a stain for a little while,” Anthony Martin, founder of the Urban Youth School in Philadelphia where Larson mentors, said Monday. “But the things we have planned, the things that Kyle has planned for the community... a few years from now, I don’t think it’s going to stay with him because of the good that he’s going to do.”

One win does not wipe the slate clean but it certainly shifts the conversation.

One win is all it took to show that Larson in Hendrick cars can at last be able to reach his full potential. There was no talk of the past in victory lane, only the future.

“Our cars are fast. He’s a champion, really,” said Hendrick. “I’m so lucky to have him.”