President Joe Biden wants America to know that he’s from the government and he’s here to help.

That sentiment became a well-worn punchline under Ronald Reagan and shaped the politics of both parties for four decades. Democrat Bill Clinton declared the era of big government over in the 1990s, Barack Obama largely kept his party in the same lane and Republican Donald Trump campaigned on the premise that Washington was full of morons, outplayed by the Chinese and others.

But Biden is now staking his presidency on the idea that the government can use his $1.9 trillion coronavirus relief plan not only to stop a pandemic and jobs crisis but also to catapult the country forward to tackle deep issues of poverty, inequality and more. The massive bill could be approved by Congress as early as Tuesday. 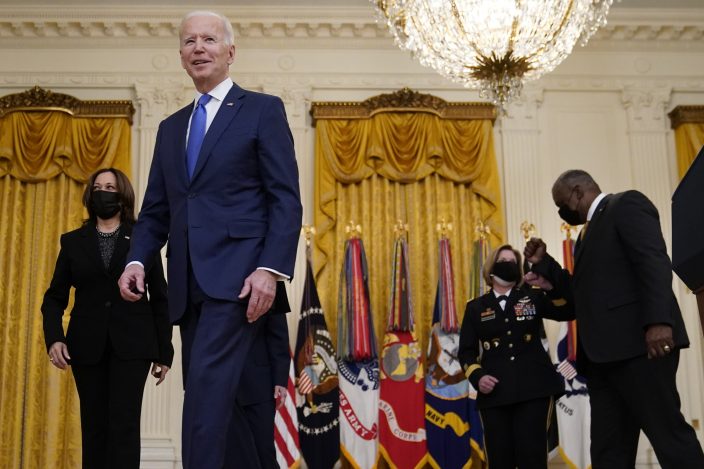 Taken together, provisions in the 628-page bill add up to one of the largest enhancements to the social safety net in decades, pushing the country into uncharted territory.

Besides stopping the pandemic and jumpstarting hiring, money in the rescue package — now awaiting final approval in the House — is supposed to start fixing income inequality, halve child poverty, feed the hungry, save pensions, sustain public transit, let schools reopen with confidence and help repair state and local government finances. And Biden is betting that the government can do all of this with the speed of a nation mobilizing for war without touching a tripwire of inflation. 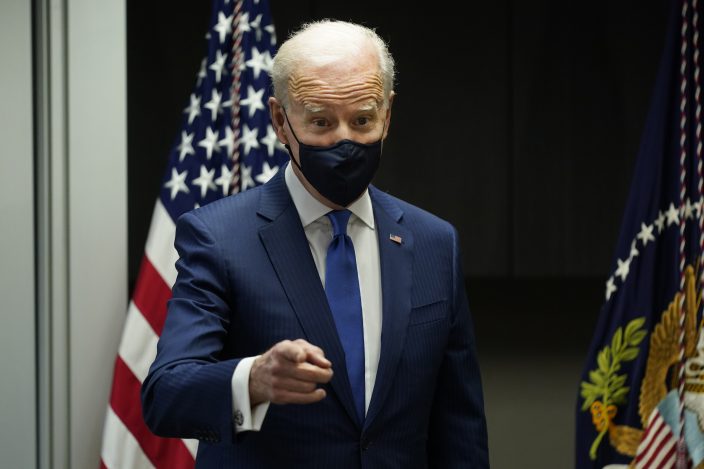 “People have lost faith government can do good for them,” says Senate Majority Leader Chuck Schumer, who spoke daily with Biden while ushering the bill through the Senate last weekend. Now, as vaccines become more available and other changes take place, "people are going to see that government actually is making their lives better — which is how Americans used to think of it, and we’ve gotten away from it.”

Republicans say Americans have plenty of reason to be skeptical, calling the American Rescue Plan excessive and wasteful. They warn the sweeping package will run up the national debt to precarious new heights after $4 trillion in aid has already been provided.

Senate Republican leader Mitch McConnell argues against the package as missing the moment — too big at a time when the virus is showing signs of easing and the economy is poised to come “roaring” back. 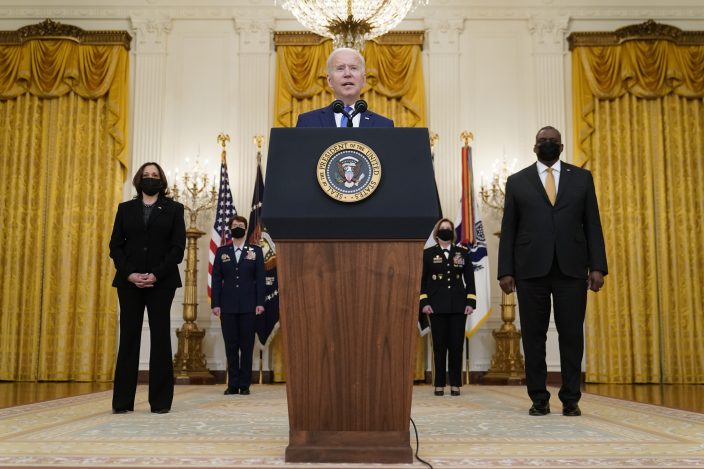 Instead of working across the aisle toward unity, as Biden has promised, McConnell says Democrats are “ramming through what they call ‘the most progressive domestic legislation in a generation,'" quoting the White House chief of staff.

“They explained their intent very clearly: to exploit this crisis as ‘a tremendous opportunity to restructure things to fit our vision,'” McConnell says. This is the first COVID-19 bill that had zero support from Republicans in the House or Senate.

Biden's bet, more than others in modern politics and economics, is full of questions. 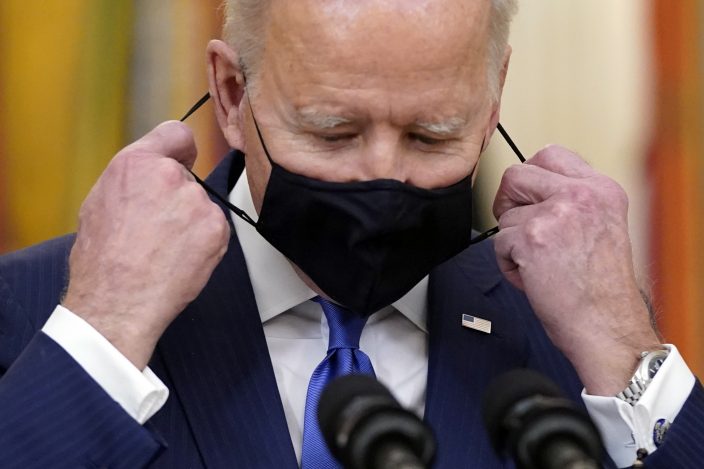 President Joe Biden takes his face mask off before speaking during an event to mark International Women's Day, Monday, March 8, 2021, in the East Room of the White House in Washington. (AP PhotoPatrick Semansky)

Can the federal money push economic growth above 6% for the first time since Reagan in 1984? Will the 9.5 million lost jobs quickly return? Will inflation surge? Will the national debt spook voters in next year's midterm elections? Biden has placed the biggest of markers on the theories of the 20th Century British economist John Maynard Keynes that the government can stimulate a dormant economy back to health.

Sweeping in scope, Biden's plan largely relies on existing health care and tax credits, rather than new programs, but it expands that standard fare in ambitious new ways that are designed to reach more people who are suffering in an unprecedented time.

“We haven’t done this before," said Syracuse University economics professor Len Burman, a co-founder of the Tax Policy Center. “If it actually does work the way it does in theory and the economy is back at full employment in a year, that would be amazing. It would save a lot of hardship and suffering.”

But Burman also has misgivings about the design of Biden's package because it distributes direct payments and other benefits to almost every household in the United States, rather than directing the money to the poor and to businesses and organizations most damaged by the pandemic and ensuing shutdowns.

“It kind of reminded me of this idea when I was in grad school of helicopter money — which was basically dropping money from the air and seeing if it raised incomes,” he said. “The money could have been better targeted.”

Final passage of the bill is expected this week — before expanded unemployment benefits are set to expire mid-March. But Biden's signing celebration will just be the start. His administration will have to show that the funds can be spent effectively and efficiently, helping those in need while giving the broader public enough confidence to awaken growth through hiring and spending.

Felicia Wong, CEO of the liberal Roosevelt Institute, sees parallels to the Great Depression, when Franklin Delano Roosevelt brought about an unprecedented series of government interventions that realigned U.S. politics. Wong said she is monitoring the process by which the money from the COVID-19 relief package gets distributed.

“That’s going to matter as much as the scale of the package because it’s going to build trust,” Wong said.

Republicans are poised to portray the spending as bloated and inefficient, much the way they attacked the Obama-era recovery act during the 2009 financial crisis.

At the same time, much of the aid is temporary, set to expire in a year or so, leaving Congress to assess Biden's approach ahead of the next election season.