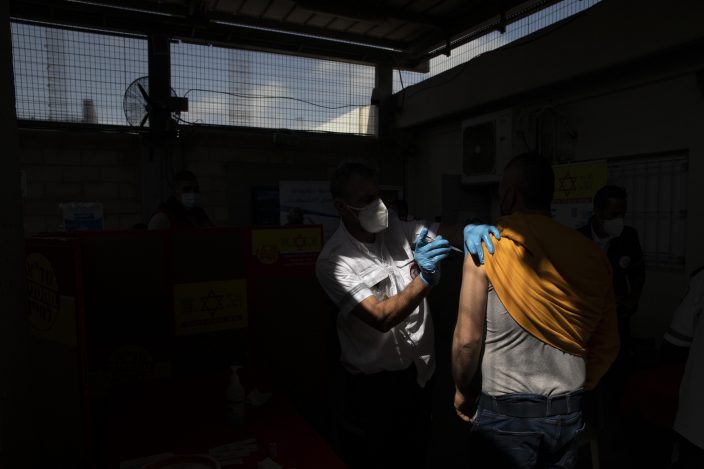 A Palestinian who works in Israel receives a Moderna COVID-19 vaccine at the Tarkumiya crossing between the West Bank and Israel, Monday, March 8, 2021. (AP PhotoSebastian Scheiner)

VIRUS OUTBREAK-CONGRESS — Joe Biden is staking his presidency on the idea that the government can use his $1.9 trillion coronavirus relief plan to stop a pandemic and jobs crisis and catapult the country forward to tackle the issues of poverty and inequality. By Josh Boak and Lisa Mascaro. SENT: 1,030 words, photos, video. With VIRUS OUTBREAK-CONGRESS-HEALTH CARE — COVID-19 bill to deliver big health insurance savings for many; VIRUS OUTBREAK-CONGRESS-CHILD TAX — The bill includes a plan to temporarily raise the child tax credit. 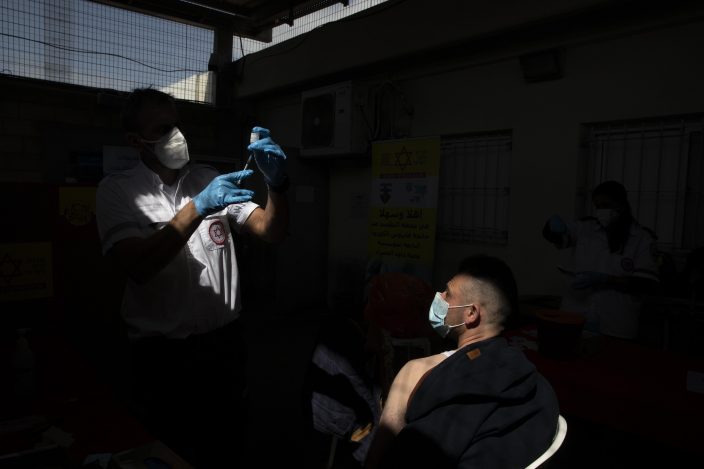 A Palestinian worker who works in Israel receives a Moderna COVID-19 vaccine at the Tarkumiya crossing between the West Bank and Israel, Monday, March 8, 2021. (AP PhotoSebastian Scheiner)

VIRUS-OUTBREAK-ONE-YEAR-MILESTONES — As the pandemic enters its second year, there’s a pent-up longing for normalcy, especially when it comes to life’s milestones. Some predict their pandemic celebrations have set a new course. The crisis has proven that distance no longer denies lasting meaning. Others still mourn the way their celebrations used to be. By Leanne Italie. SENT: 1,160 words, photos.

MYANMAR — Demonstrators in Myanmar’s biggest city came out for their first mass protests in defiance of an 8 p.m. curfew, seeking to show support for an estimated 200 students trapped by security forces in a small area of one neighborhood. SENT: 1,050 words, photos. With MYANMAR-MEDIA-CRACKDOWN — Myanmar media defiant as junta cracks down. 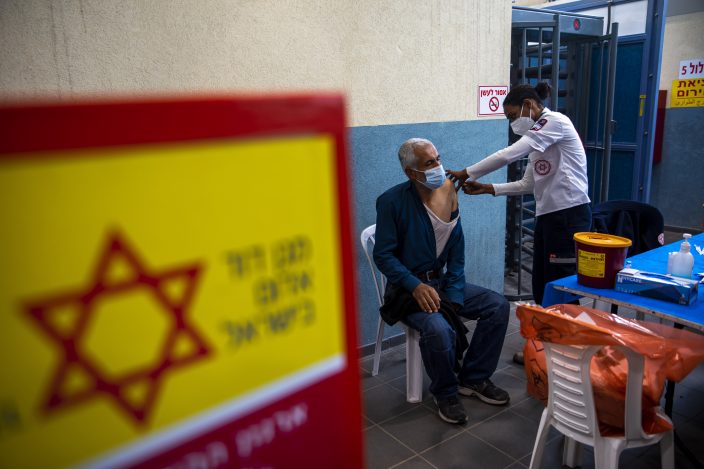 JAPAN-TSUNAMI ANNIVERSARY-LIVES CHANGED — Ten years after Japan’s earthquake, tsunami and nuclear disaster, the lives of many who survived are still on hold. On March 11, 2011, one of the biggest temblors on record touched off a massive tsunami, killing more than 18,000 people and setting off catastrophic meltdowns at the Fukushima Daiichi nuclear plant. Nearly half a million people were displaced. Tens of thousands still haven’t returned home. By Mari Yamaguchi and Haruka Nuga. SENT: 1,190 words, photos.

BRITAIN-MEGHAN-AND-HARRY — Prince Harry and Meghan’s explosive TV interview divided people around the world, rocking an institution that is struggling to modernize with claims of racism and callousness toward a woman struggling with suicidal thoughts. By Danica Kirka and Jill Lawless. SENT: 1,470 words, photos. 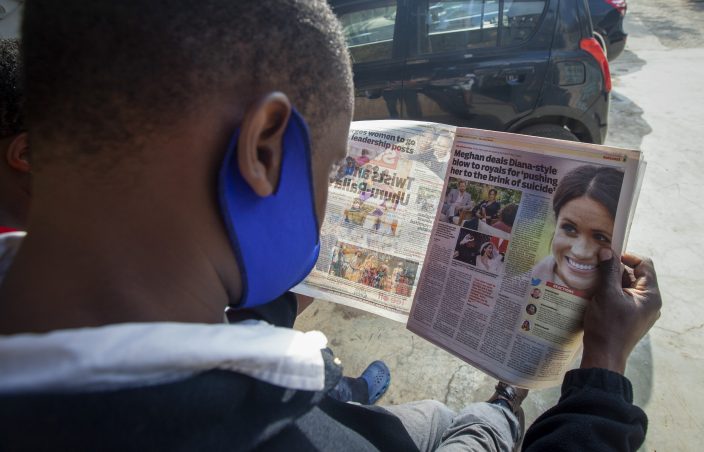 A man reads a copy of The Standard newspaper with coverage of the two-hour appearance of Britain's Prince Harry and Meghan with Oprah Winfrey, in Nairobi, Kenya Tuesday, March 9, 2021. Prince Harry and Meghan's explosive TV interview divided people around the world on Monday, rocking an institution that is struggling to modernize with claims of racism and callousness toward a woman struggling with suicidal thoughts. (AP PhotoSayyid Abdul Azim)

VIRUS-OUTBREAK-GIBRALTAR — Gibraltar, a densely populated British overseas territory at the mouth of the Mediterranean Sea, is emerging from a two-month lockdown with the help of a successful vaccination rollout. SENT: 1,020 words, photos. With VIRUS OUTBREAK-THE LATEST.

BIDEN-WIND FARMS — A huge wind farm off the Massachusetts coast is edging closer to federal approval, setting up what the Biden administration hopes will be a model for a sharp increase in offshore wind energy development along the East Coast. SENT: 810 words, photos.

GEORGE-FLOYD-OFFICER-TRIAL — The trial of a former Minneapolis police officer charged in George Floyd’s death is forging ahead with jury selection, even though a looming appellate ruling could halt the case and delay it for weeks or even months as the state tries to add a third-degree murder count. SENT: 850 words, photos.

CALIFORNIA-GOVERNOR-RECALL — California Gov. Gavin Newsom is set to give perhaps the most important speech of his political life, and he’s spent weeks laying the groundwork for an upbeat address aimed at nearly 40 million people exhausted by a year of coronavirus restrictions. SENT: 890 words, photos.

INDIA-ACTIVISTS UNDER FIRE — The frequency in the way a sedition law in India is invoked has criminal lawyers troubled and critics say it’s the latest attempt by Prime Minister Narendra Modi’s government to mute dissent and criminalize it. SENT: 950 words, photos.

PERSIAN-GULF-JEWISH-REVIVAL — Half a year after the United Arab Emirates and Bahrain established diplomatic relations with Israel, discreet Jewish communities in the Gulf Arab states that once lived in the shadow of the Arab-Israeli conflict are adopting a more public profile. SENT: 1,100 words, photos.

UN-INTERNATIONAL-WOMEN’S-DAY — U.N. Secretary-General Antonio Guterres warned on International Women’s Day that the COVID-19 pandemic has seen “a rollback in hard-won advances in women’s rights” even as calls for women’s empowerment echoed around the globe, from Myanmar and Afghanistan to Saudi Arabia and the United States. SENT: 1,050 words, photos.

FINANCIAL-MARKETS — Asian shares were mixed, cheered by the expected passage of the U.S. stimulus package, although that optimism was tempered by worries about inflation and the coronavirus pandemic. By Business Writer Yuri Kageyama. SENT: 780 words, photos.

WWE-BUSY-SPRING — World Wrestling Entertainment will be making two major moves over the next six weeks — a TV network move to Peacock on March 18, along with the search for a new home for the ThunderDome. By Sports Writer Joe Reedy. SENT: 790 words, photo.

KANSAS-MILES — Les Miles is out as Kansas’ head coach just days after he was placed on administrative leave amid sexual misconduct allegations from his tenure at LSU. By College Football Writer Ralph D. Russo. SENT: 710 words, photo.