The Tampa Bay Lightning hoisted the Stanley Cup last year, leaning on their top line of Brayden Point, Nikita Kucherov and Ondrej Palat to produce nearly 40% of their points during the postseason run.

The defending champions are off to the best start in franchise history because they have so much more balance on offense even with Kucherov, their leading scorer the previous five seasons, out for the season after having hip surgery.

NHL coaches try to match their No. 1 lines against the top trio of forwards and those stars push one another at both ends of the ice. The best teams keep up the pressure by rolling multiple lines that can score and by having offensive-minded defensemen who can set up goals or light the lamp themselves.

Tampa Bay, the New York Islanders, Vegas and Toronto led their divisions at the beginning of the week, in part because their secondary scoring is a strength. Carolina, Florida, Washington, Minnesota, Edmonton and Winnipeg are among the teams that have been successful so far because they rely on more than their No. 1 line to produce points. 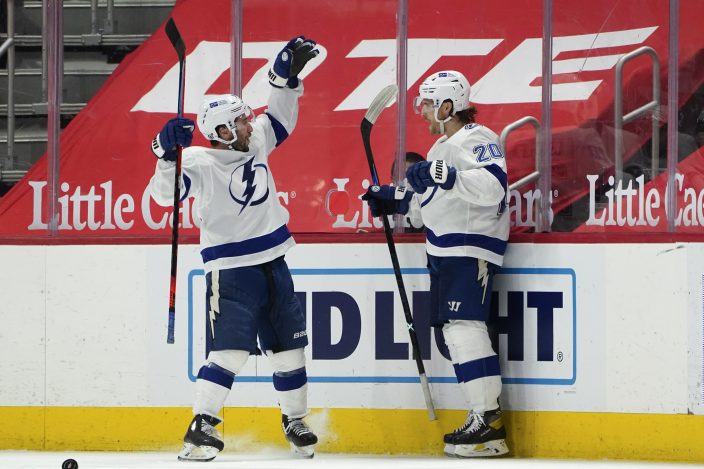 The Oilers have had 20 players score, giving teams more than just Connor McDavid and Leon Draisaitl to worry about.

“We know that Connor and Leon are going to drive some offense, but to be a good team we need to have that throughout our lineup and not just chipping in but we need consistency in that part," Edmonton coach Dave Tippett said.

The Islanders were the first team in the league this season to have five players, including the four that center each line, score at least nine times. They also have a trio of defensemen with at least 10 points.

Maple Leaf stars Auston Matthews and Mitch Marner are among the NHL's scoring leaders, but their team didn't start the week leading the league in points because of just the dynamic duo.

With the luxury of having a star such as John Tavares playing on the second line and third-line wing Zach Hyman capable of scoring and setting up goals, Toronto may finally get to celebrate winning a Stanley Cup title for the first time since 1967.

“Having great depth is something championship teams have and being able to provide scoring throughout the lineup," Hyman said. “It also helps with team morale and chemistry when everyone feels like they’re contributing. It’s always fun to score."

The Western Conference-champion Dallas Stars got off to a rough start this season that started with a COVID-19 outbreak that led to postponements. All-Star center Tyler Seguin and goaltender Ben Bishop are also recovering from offseason surgeries.

After routing Chicago 6-1, Dallas has now won two of three by a combined 11-1 after dropping four straight games. Stars coach Rick Bowness insisted he likes his team's chances to bounce back, especially if they can play more 5-on-5 hockey by avoiding penalties.

“I'm happy with our team game even though the record doesn’t reflect that," Bowness said.

Calgary, coming off consecutive postseason appearances for the first time in a decade, became the second NHL team to fire a coach this season. The Flames fired coach Geoff Ward last week and replaced him with Darryl Sutter, who is leading the team for the second time.

“We want to get out of this funk we're in and push to get back in the playoffs," forward Johnny Gaudreau said.

Vegas visits St. Louis for back-to-back games Friday and Saturday in a clash of the top two teams in the West Division.