Evgeni Malkin isn’t sure what to make of the off-ice bond he’s building with new Pittsburgh linemate Kasperi Kapanen.

“I don’t know, he speaks Finland and I not understand,” the Russian-born Malkin said in his best English.

On the ice, translating far easier. 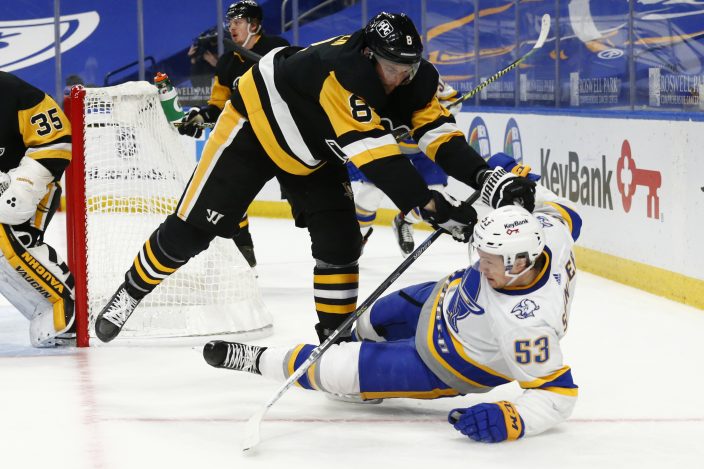 Kapanen’s no-look pass on a 2-on-0 break set up Malkin’s opening goal, and the Penguins went on to beat the free-falling Buffalo Sabres 5-2 on Thursday night for their fourth straight victory.

Malkin, who added an assist, extended his point streak to six games (three goals, six assists) with much of the production coming alongside Kapanen, who was acquired in an offseason trade with Toronto.

“Maybe I’m too old for him,” the 34-year-old Malkin said about the 24-year-old Kapanen. “I try to be with him, play cards and play video games, too. But yeah, he’s a cool guy. Really funny.” 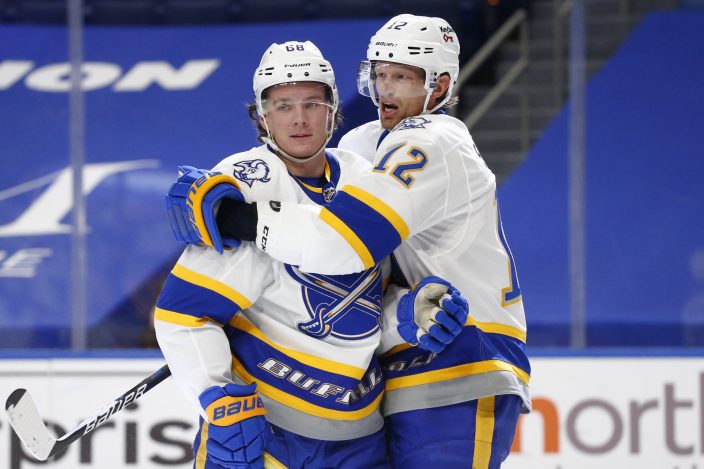 Jake Guentzel scored the go-ahead goal on the power play with 8:24 left in the second period. Brandon Tanev, Anthony Angello and Bryan Rust, with an empty-netter, also scored in a game the Penguins never trailed.

Pittsburgh’s Mike Sullivan became the NHL’s fourth U.S.-born coach to win 300 games, and 12th overall to have that many career victories and at least two Stanley Cup titles. 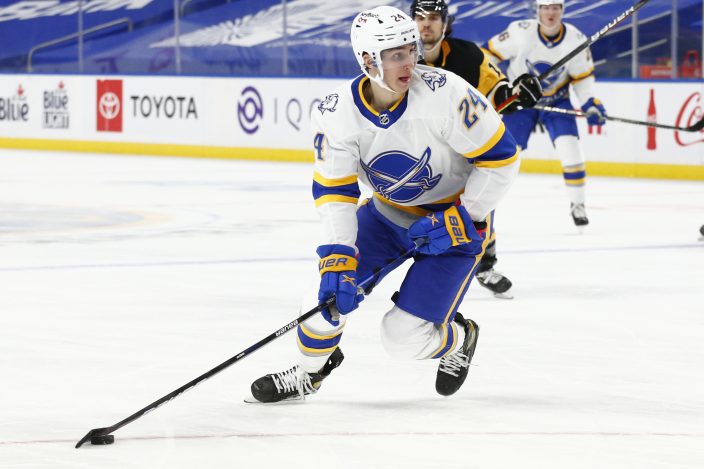 “Obviously, it’s a humbling honor,” said Sullivan, who was awarded the game puck. “It was nice to reach this milestone. Certainly, I’m the benefactor of having coached some really good players.

The teams will complete the two-game series Saturday night. 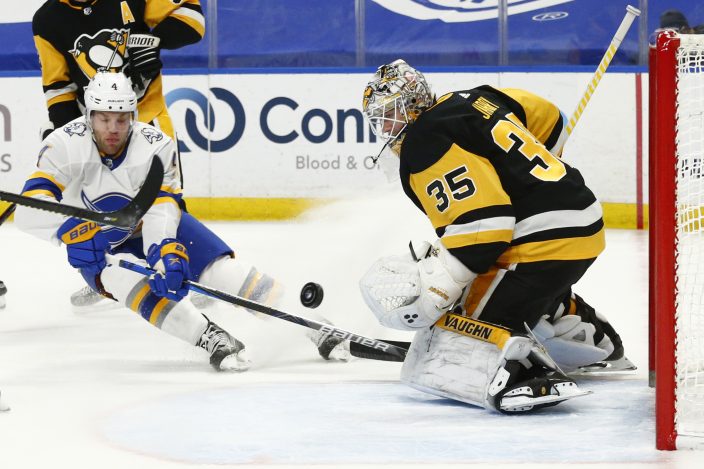 Tage Thompson, with his first goal in 33 games, and Victor Olofsson scored while Jonas Johansson stopped 22 shots for Buffalo. The Sabres played their second second game without captain Jack Eichel. He’s out indefinitely with an upper-body injury.

Rookie center Dylan Cozens, meantime, did not return after being shaken up when shoved into the boards at center ice by Zach Aston-Reese 2:27 into the third period. Cozens was a few feet from the boards when he released the puck, before being checked with his head striking the boards.

The Penguins then piled on with Angello converting a 2-on-1 break 16 seconds later to make it 4-2.

Sabres coach Ralph Krueger had no update on Cozens except to say the team’s 2019 first-round draft pick was still being evaluated.

Krueger, however, questioned why Aston-Reese wasn’t disciplined further in accusing the player of catching Cozens in a vulnerable position.

As for the outcome, Krueger was measured in assessing his injury depleted team’s performance.

“Guys are trying, but obviously, it’s not good enough,” he said. “Nobody’s going to feel sorry for us in this situation. We’ve got to fight our way out of it. Nothing’s coming easy.”

The Sabres twice rallied from one-goal deficits before Pittsburgh went ahead 3-2 with Buffalo’s Jacob Bryson off for hooking.

The Penguins worked the puck around the Sabres zone by eventually feeding Sidney Crosby behind the net. Crosby fed Guentzel in the right circle, from where he snapped a shot inside the far post in catching Johansson on his knees protecting the short side.

Malkin scoring and the Penguins winning in Buffalo is nothing new. For Malkin, he upped his career total to 19 goals and 38 assists for 57 points in 43 career games against he Sabres, while the Penguins improved to 11-0-2 in their last nine trips to Buffalo.

What was different was Angello’s goal. It was the second of the rookie’s and came in an arena he grew up attending and rooting for the Sabres.

“Obviously, playing in Buffalo was a little bit surreal,” said Angello, who few up in Syracuse and made the two-plus hour drive west to Buffalo. “And then scoring, honestly, I’d say was even more surreal if that’s possible.”

The only thing missing was having his family in the stands. The Sabres will begin allowing a limited number of fans starting on March 20.

Krueger said Eichel went out of state to get what he called “a deeper assessment” of the upper-body injury the captain sustained in a 5-2 loss at the New York Islanders on Sunday. Eichel was favoring his neck after being checked into the end boards with about four minutes remaining.

Penguins: D John Marino did not play and is listed day to day wth an upper body injury.

for undisclosed reasons and after missing practice Wednesday for what Sullivan called “maintenance.”