VIRUS OUTBREAK-ONE YEAR-BIDEN — One year after the nation was brought to a near-standstill by the coronavirus, President Biden pledged in his first prime-time address to make all adults eligible to get vaccines by May 1 and dangles the prospect of “independence from this virus” by the Fourth of July. By Zeke Miller and Jonathan Lemire. SENT: 930 words, photos, videos. With VIRUS-OUTBREAK-BIDEN-TRANSCRIPT. 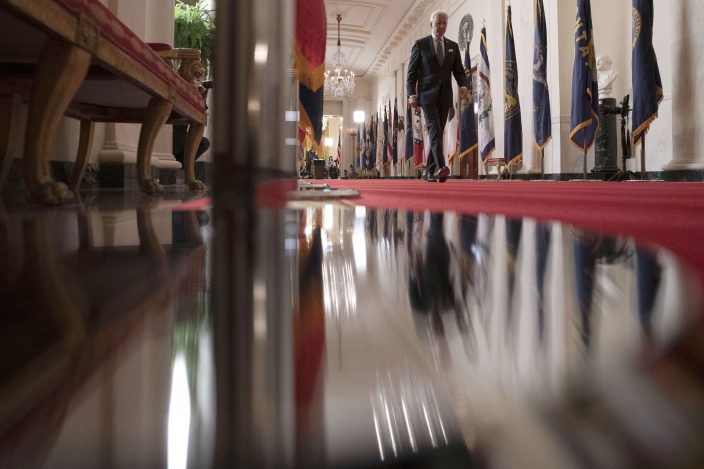 President Joe Biden leaves after speaking about the COVID-19 pandemic during a primetime address from the East Room of the White House, Thursday, March 11, 2021, in Washington. (AP PhotoAndrew Harnik)

VIRUS-OUTBREAK — For doctors who treat them, the pandemic’s impact on the mental health of children is increasingly alarming. A Paris pediatric hospital has seen a doubling in the number of children and young teenagers requiring treatment after attempted suicides since September. By John Leicester. SENT: 950 words, photos. With VIRUS OUTBREAK-THE LATEST.

MYANMAR-JOURNALISTS — A court in Myanmar extended the pre-trial detention period for an Associated Press journalist arrested while covering demonstrations against the military’s seizure of power last month. He is facing a charge that could send him to prison for three years. SENT: 720 words, photos. With MYANMAR — Myanmar junta kills more protesters, adds Suu Kyi accusation. 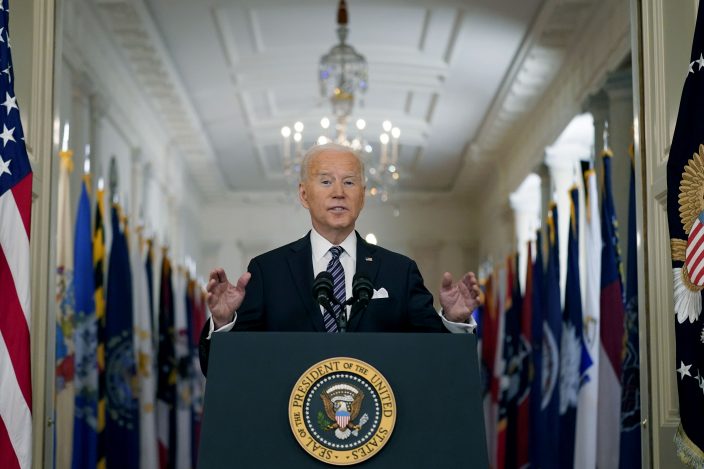 President Joe Biden speaks about the COVID-19 pandemic during a prime-time address from the East Room of the White House, Thursday, March 11, 2021, in Washington. (AP PhotoAndrew Harnik)

IRAQ-MEETING THE POPE — She is an Iraqi Christian whose personal tragedy deeply resonated with Pope Francis during his historic visit to the town of Qaraqosh, once under the reign of terror by Islamic State militants. But just a few days after the pontiff’s visit last weekend, Doha Sabah Abdallah says the realities for Christians in Iraq will be very difficult to change, with a myriad of challenges remaining. By Samya Kullab. SENT: 740 words, photo.

SYRIA-REFUGEES-10 YEARS — The Syrian conflict has resulted in the largest displacement crisis since World War II. Millions who fled bombing in 2012 are unlikely to return in the foreseeable future. By Fay Abuelgasim. SENT: 760 words, photos. 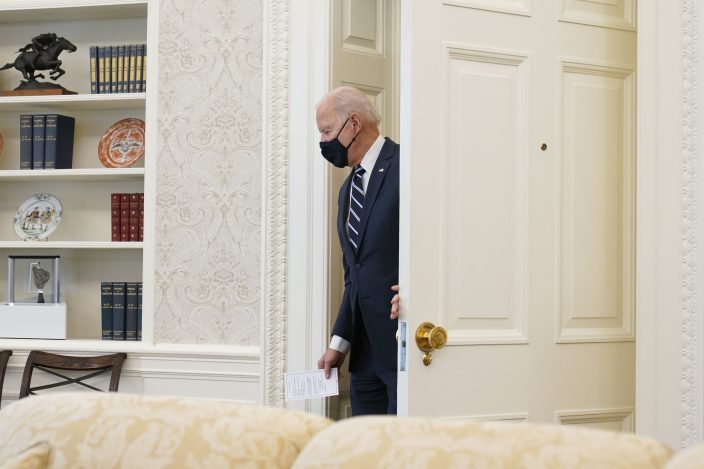 HAWAII-FLOODING — Kauai community once again cut off by landslides after storm. SENT: 190 words. 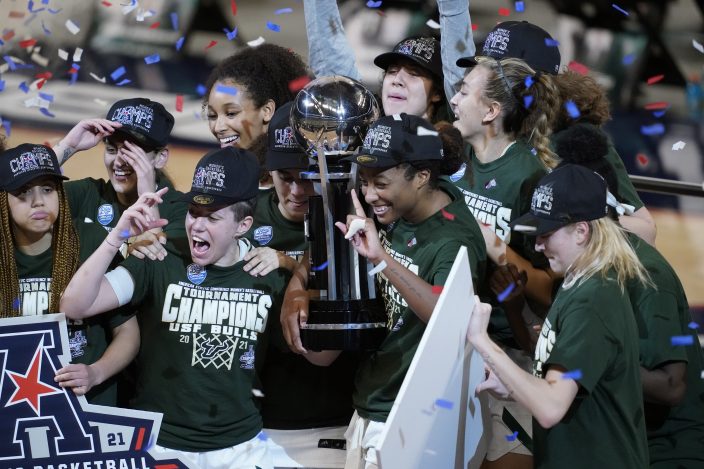 VIRUS OUTBREAK-ONE YEAR-FAITH LEADERS — In a pandemic-wracked year, religious leaders and spiritual counselors across the U.S. ministered to the ill, fed the hungry, consoled the bereaved. SENT: 1,480 words, photos, video. 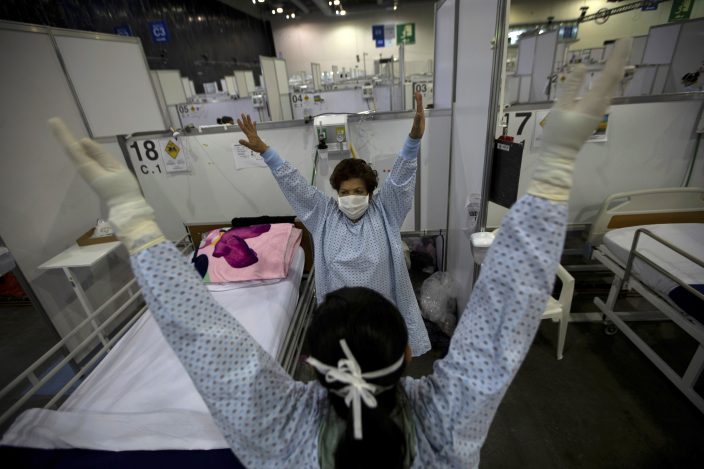 Directed by a nurse, a COVID-19 patient, back center, stretches her arms as part of a fitness program in a field hospital built inside the Citibanamex convention center in Mexico City, Thursday, March 11, 2021, on the first year anniversary that the World Health Organization declared the coronavirus a pandemic. (AP PhotoFernando Llano)

VIRUS-OUTBREAK-ASIA — India has registered its worst single-day increase in coronavirus cases since late December as the western state of Maharashtra battles a resurgence. SENT: 850 words, photos.

VIRUS-OUTBREAK-UN-CHIEF — The United Nations chief criticized the “many examples of vaccine nationalism and vaccine hoarding” as well as side deals with COVID-19 vaccine manufacturers that undermine access to all people in the world. SENT: 280 words, photo. 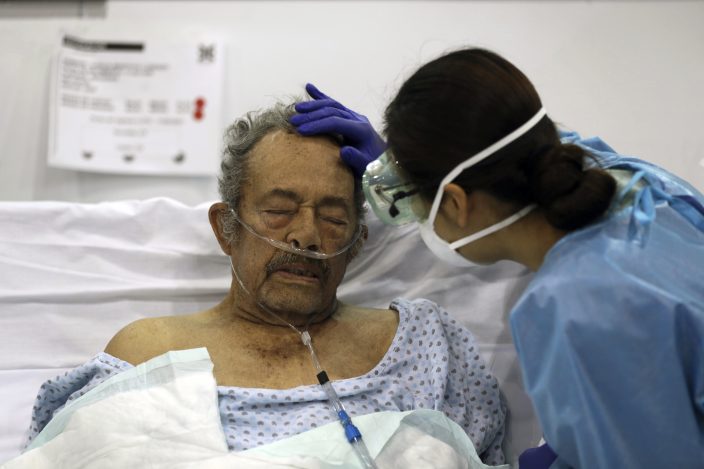 A healthcare worker strokes the forehead of a COVID-19 patient in a field hospital built inside the Citibanamex convention center in Mexico City, Thursday, March 11, 2021, on the first year anniversary that the World Health Organization declared the coronavirus a pandemic. (AP PhotoFernando Llano)

BIDEN-ASIA-PACIFIC — Biden and fellow leaders of the Indo-Pacific alliance known as “the Quad” — the U.S., India, Japan and Australia — meet virtually to discuss the coronavirus pandemic and well as the growing influence of China in the region. UPCOMING: 910 words, photo by 5:30 a.m. Meeting at 8:30 a.m. With AUSTRALIA-QUAD — Australian leader says Quad meeting will anchor stability.

VIRUS OUTBREAK-BIDEN-MONEY — To pay out his coronavirus relief package, Biden must spend an average of $3.7 billion every day for the rest of this year. SENT: 910 words, photos.

CONGRESS-WHAT’S NEXT — A split Congress is hunkering down for a long spring slog to push the next priorities in Biden’s agenda forward. By Congressional Correspondent Lisa Mascaro. SENT: 1,060 words, photos.

KOREAS-DEFECTORS’-REMITTANCES — For years, North Korean defectors have resorted to an underground network of brokers to call and send money to their families in North Korea, but the pandemic has put a crimp on remittances. SENT: 1,040 words, photos.

JAPAN-US — Japanese Prime Minister Yoshihide Suga will travel to Washington next month for his first face-to-face summit with Biden after he and his entourage complete their COVID-19 vaccinations. SENT: 320 words, photos.

UNITED NATIONS-SOUTH SUDAN — The director-general of the International Committee of the Red Cross warned that South Sudan is “a forgotten conflict” facing a “humanitarian crisis” made worse by the pandemic, while the U.N. chief cautioned that 60% of people in the world’s newest nation are “increasingly hungry.” SENT: 740 words, photo.

RACIAL INJUSTICE-BREONNA TAYLOR-FBI — Their numbers have dwindled since protesters first flooded Louisville’s streets after police fatally shot Breonna Taylor in her home a year ago, but their push for justice has never waned. SENT: 1,040 words, photos, video. With PROTEST-LAW-KENTUCKY — Kentucky Senate votes to make it a crime to taunt police.

PORTLAND POLICE-FUNDING — The mayor of Portland, Oregon, will seek $2 million in one-time funding for police, other agencies and outreach programs to try to stem rampant gun violence in the city. SENT: 550 words, photo.

CALIFORNIA-OIL-DRILLING — Environmental and community groups have sued a California county after the prime oil-drilling region approved a plan to fast-track thousands of new wells in a state that’s positioned itself as a leader in combating climate change. SENT: 550 words, photo.

CALIFORNIA BOAT FIRE — The owner of a scuba diving boat that burned and sank off the California coast, killing 34 people, has sold off his two remaining vessels. SENT: 360 words, photos.

SOCIAL-MEDIA-VACCINE-MISINFORMATION — With vaccination against COVID-19 in full swing, social platforms like Facebook, Instagram and Twitter say they’ve stepped up their fight against misinformation that aims to undermine trust in the vaccines. But problems abound. By Barbara Ortutay and Amanda Seitz. SENT: 720 words, photo.

TEEN-VOGUE — A major advertiser at Teen Vogue, the retailer Ulta Beauty, has paused ad spending at the Conde Nast publication amid a growing outcry over anti-Asian tweets by the site’s new editor in chief, Alexi McCammond. SENT: 440 words.