The gallery was curated by AP photographer Pavel Golovkin in Moscow. 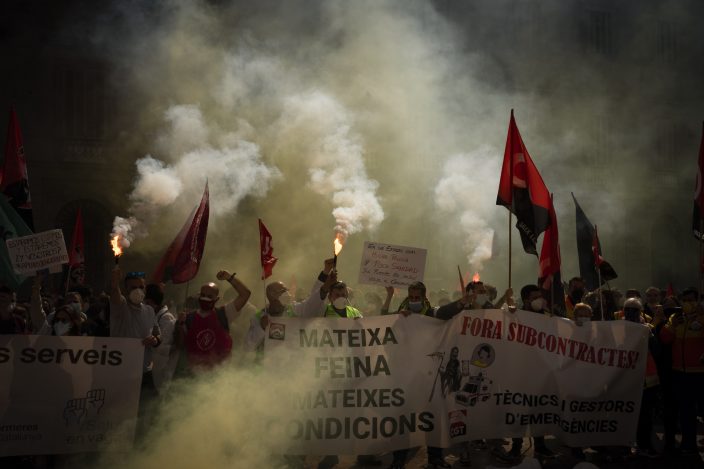 Health workers hold flares in front of the Palace of the Generalitat, the headquarters of the Catalonian government, during a protest against their working conditions in Barcelona, Spain, Wednesday, March 10, 2021. (AP PhotoEmilio Morenatti) 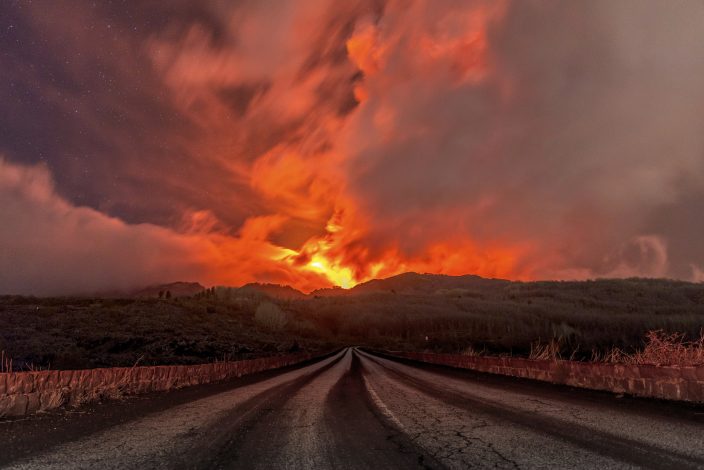 Dr. Gabriele Zanolini adjusts the ventilator of a patient at the emergency COVID-19 ward of the Mellino Mellini hospital in Chiari, northern Italy, Monday, March 8, 2021. The 160-bed hospital in the Po River Valley town has no more beds for patients stricken with the highly contagious variant of COVID-19 first identified in Britain, and which now has put hospitals in Italy's northern Brescia province on high alert. (AP PhotoLuca Bruno) 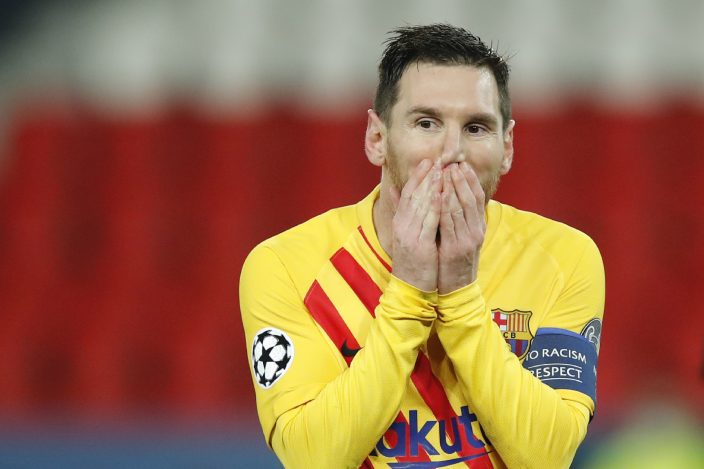 Barcelona's Lionel Messi reacts after a missed a penalty shot during the Champions League, round of 16, second leg soccer match between Paris Saint-Germain and FC Barcelona at the Parc des Princes stadium in Paris on Wednesday, March 10, 2021. Neither Messi nor Cristiano Ronaldo will be in the Champions League quarterfinals for the first time since 2005. The two greatest players of the current generation were both eliminated from the competition this week. Messi scored a goal but missed a penalty as Barcelona was eliminated by Paris Saint-Germain. Ronaldo and his Juventus teammates were ousted by Porto the night before. Ronaldo has won five Champions League titles in his career. Messi has won four. (AP PhotoChristophe Ena) 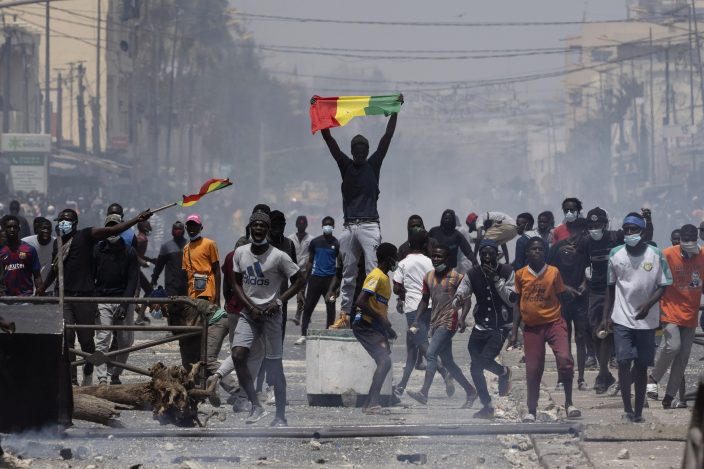 A demonstrator holds up a Senegalese flag during protests against the arrest of opposition leader and former presidential candidate Ousmane Sonko in Dakar, Senegal, Friday, March 5, 2021. Days of violent protests in Senegal have killed at least one person, local reports say, as young people take to the streets nationwide in support of the main opposition leader who was detained Wednesday. (AP PhotoLeo Correa) 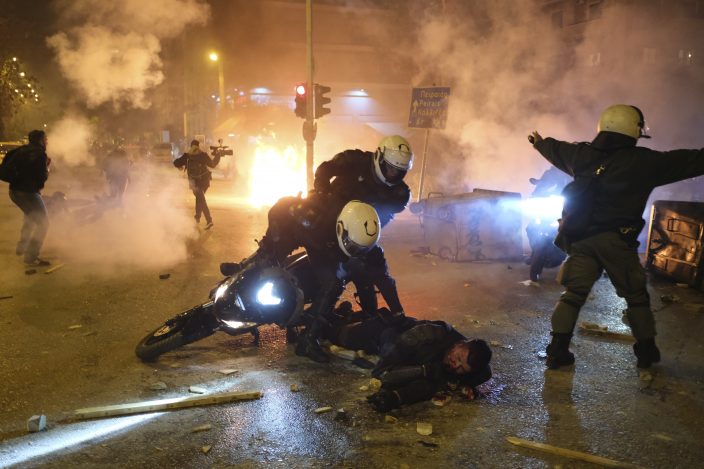 Colleagues try to help an injured police officer lying on the road after an attack by protesters during clashes in Athens, Tuesday, March 9, 2021. Severe clashes broke out Tuesday in Athens after youths protesting an incident of police violence attacked a police station with petrol bombs. (AP PhotoAggelos Barai) 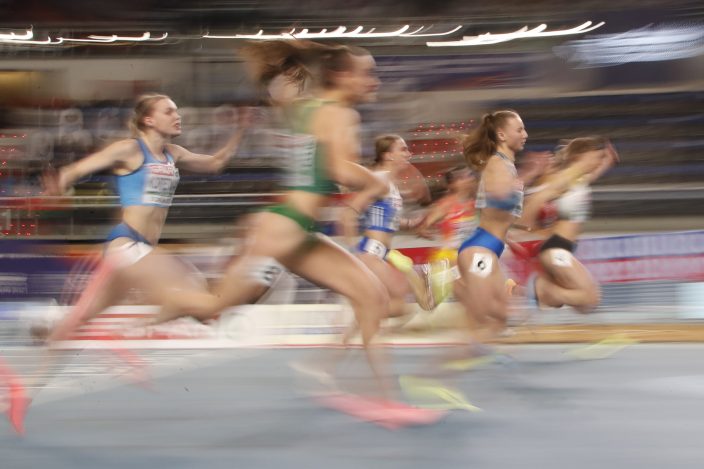 Ukraine's Viktoriya Ratnikova, second right, competes in the round one heat one of the 60m race during the European Athletics Indoor Championships in Torun, Poland, Sunday, March 7, 2021. (AP PhotoDarko Vojinovic) 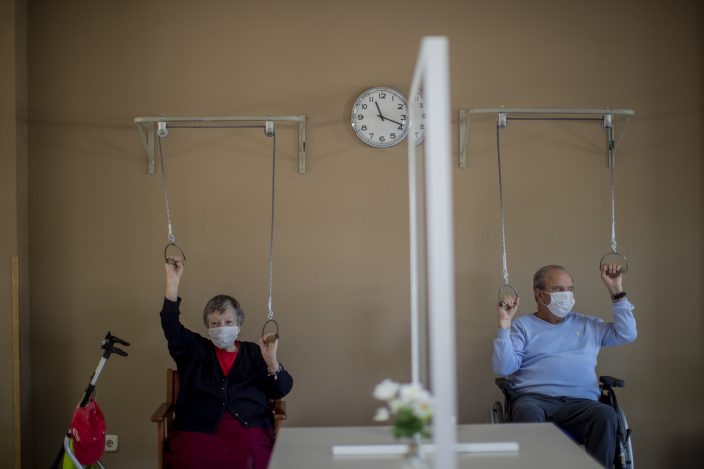 Residents wear face masks to protect against the spread of coronavirus as they exercise at DomusVi nursing home in Leganes, Spain, Wednesday, March 10, 2021. (AP PhotoManu Fernandez) 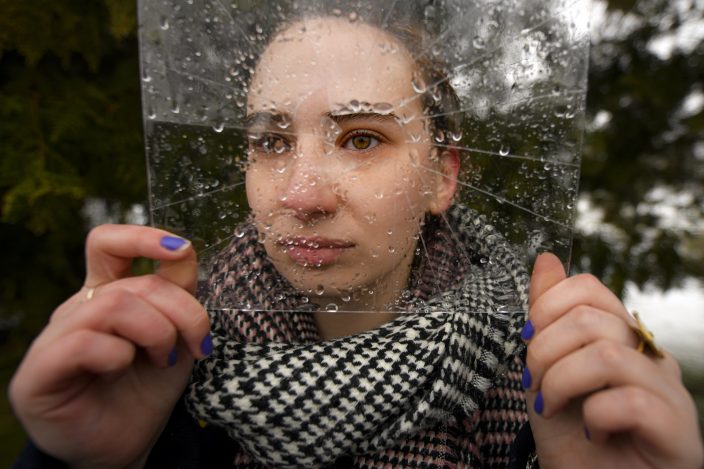 A woman poses holding a piece of cracked plastic sheet during a flashmob to raise awareness of the increased levels of violence against women since the COVID-19 pandemic started one year ago, in Bucharest, Romania, Wednesday, March 10, 2021. Participants called for a bill, currently blocked in procedures in Romania's parliament, that would require men who are subjects of restrictive orders to wear ankle monitors, to be voted into law. (AP PhotoAndreea Alexandru) 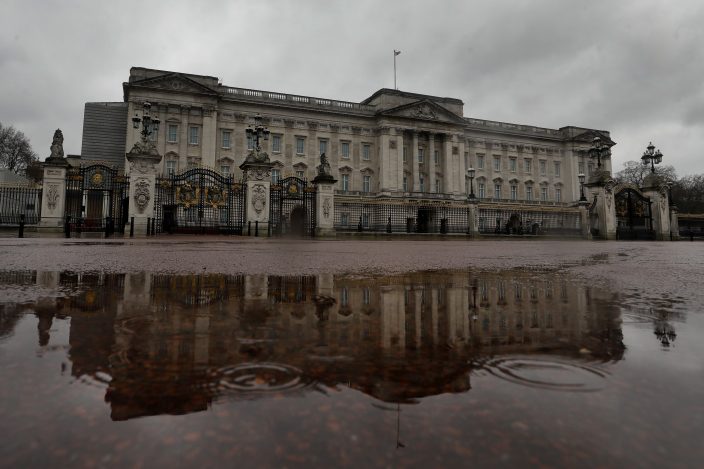 Buckingham Palace is reflected in a rain puddle in London, Wednesday, March 10, 2021. In countries with historic ties to Great Britain, allegations by Prince Harry and Meghan about racism within the royal family have raised questions about whether those nations want to be closely connected to Britain anymore after the couple's interview with Oprah Winfrey. (AP PhotoKirsty Wigglesworth) 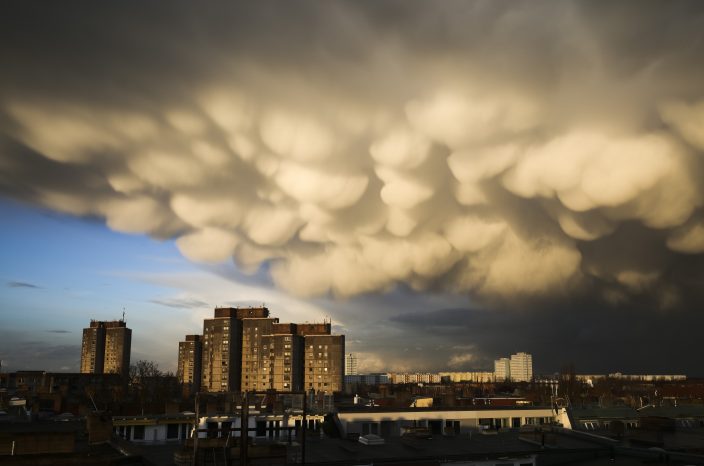 Clouds cover the sky over the Ernst-Taehlmann-Park housing estate after a thunderstorm in Berlin, Germany, Thursday, March 11, 2021. (AP PhotoMarkus Schreiber)