Casey DeSmith stopped 24 shots, and the Pittsburgh Penguins handed Buffalo its 10th straight loss with a 3-0 victory over the lowly Sabres on Saturday night.

Jake Guentzel scored the go-ahead goal by batting in his own rebound with 3:23 remaining in the second period. The power-play goal was set up by Evgeni Malkin, who has three goals and seven assists in a seven-game point streak.

The Sabres dropped to 0-8-2 in their past 10. The winless streak matches the fourth-worst in team history, and the longest since Buffalo dropped a franchise-worst 14 straight midway through the 2014-15 season. 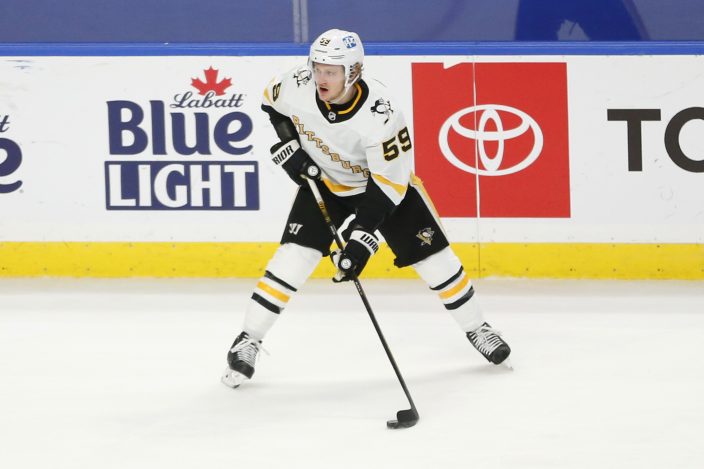 Sidney Crosby, from deep in his own end, and Mark Jankowski scored empty-netters in the final minute as Pittsburgh completed a two-game sweep of Buffalo following a 5-2 win on Thursday night. The Penguins have won five in a row overall, matching the team's longest win streak since Oct. 10-18, 2019.

Carter Hutton stopped 31 shots for Buffalo, which was shut out for the fifth time this season. It has scored two or fewer goals in seven of its past eight. The Sabres were without captain Jack Eichel, who missed his third straight game and is out for what coach Ralph Krueger called the “foreseeable future” with an upper-body injury.

Buffalo also was minus rookie center Dylan Cozens, who had been elevated to the top line in place of Eichel. Cozens is day to day with an upper-body injury after being checked awkwardly into the boards Thursday.

Guentzel scored his team-leading 10th goal 16 seconds after Buffalo’s Colin Miller was sent off for hooking. The Penguins worked the puck to Malkin in the right circle, where he fed Guentzel alone in front.

Pittsburgh limited Buffalo to just six shots in the third period in proving it can play a low-scoring contest.

Bryan Rust made a key defensive play by rushing back to prevent Buffalo’s Tobias Rieder from getting off a shot on a short-handed breakaway with 8:20 left. 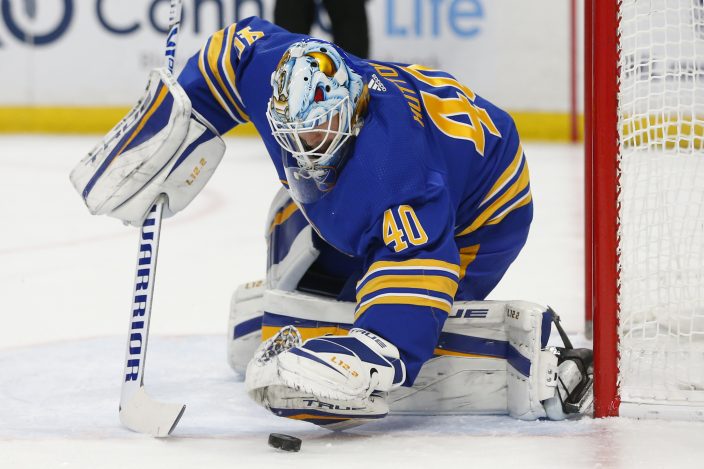 The Sabres stuck to a tight-checking, patient approach, while attempting to generate chances off transition in keeping the game scoreless through the first 36 1/2 minutes.

It was much sharper defensive outing for Buffalo after the Penguins scored three of their four goals — not including an empty-netter — off odd-man rushes on Thursday.

Hutton, meanwhile, was sharp on the few chances the Penguins enjoyed Saturday. His best stop came 8 1/2 minutes into the second period when he closed his pads in time to stop Guentzel’s snap shot from the left circle.

Generating offense, however, continues to be an issue for Buffalo, which entered the game ranked 30th in the NHL in averaging 2.24 goals a game and last in having scored 34 times in 5-on-5 situations.

The Penguins’ penalty-killing unit went 2 for 2 and did not allow a power-play goal in two straight games for just the second time this season. The Sabres’ power-play unit is 0 for 15 in its past nine games.

NO REST FOR RISTOLAINEN

Sabres defenseman Rasmus Ristolainen has topped 21 minutes of ice time in five of eight games since missing seven recovering from a severe bout with COVID-19.

Krueger noted it’s difficult to keep the eighth-year player off the ice, which is why Ristolainen got a day off from practice on Friday.

“You tell him that,” Krueger said, when asked if he would consider resting Ristolainen when Buffalo plays on consecutive nights. “He is too competitive for that.”

Penguins: D John Marino was a game-time decision before missing his second consecutive outing with an upper-body injury.

Sabres: D Brandon Davidson played after being activated off the taxi squad, and replaced Matt Irwin, who was a healthy scratch. D Henri Jokiharju was loaned to the taxi squad.