Turkish President Recep Tayyip Erdogan has toned down his anti-Western and anti-US rhetoric in an apparent effort to reset the rocky relationship with his NATO allies, but so far he's been met by silence from U.S. President Joe Biden.

Nearly two months into his presidency, Biden still hasn’t called Erdogan, which some in Turkey see as a worrying sign. By contrast, former President Donald Trump and Erdogan spoke just days after the 2016 election.

Ties between Ankara and Washington — which once considered each other as strategic partners — have steadily deteriorated in recent years over differences on Syria, Turkey’s cooperation with Russia and more recently on Turkish naval interventions in the eastern Mediterranean, which U.S. officials have described as destabilizing. 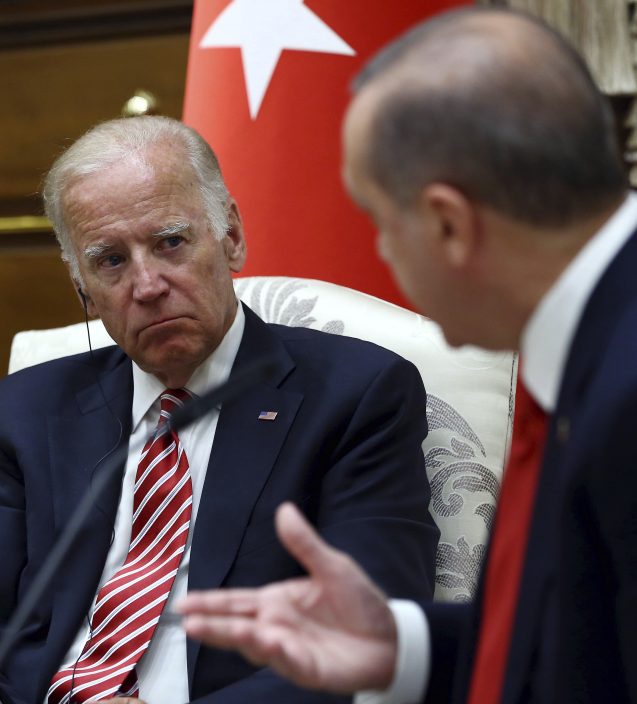 FILE- In this Wednesday, Aug. 24, 2016 file photo, then U. S. Vice President Joe Biden, left, listens to Turkish President Recep Tayyip Erdogan during a meeting in Ankara, Turkey. Erdogan has toned down his anti-Western and anti-US rhetoric in an apparent effort to reset the rocky relationship with his NATO allies. So far, however, he’s been met by silence from U.S. President Joe Biden. Nearly two months into his presidency, Biden still hasn’t called Erdogan, which some in Turkey see as a worrying sign. (Kayhan Ozer, Presidential Press Service Pool via AP, File)

Despite tensions, many within Erdogan’s government were hoping for four more years of the administration led by Trump, who had a personal rapport with Erdogan and didn’t give him any lectures about Turkey’s human rights record.

Biden drew ire from Turkish officials after an interview with the New York Times in which he spoke about supporting Turkey’s opposition against “autocrat” Erdogan.

In public statements, Turkish officials have played down the lack of a phone call from the White House, noting that conversations are happening at other levels, but a senior Turkish government official told The Associated Press that Erdogan’s office “is not thrilled” about it. The official spoke on condition of anonymity due to the sensitivity of the issue. 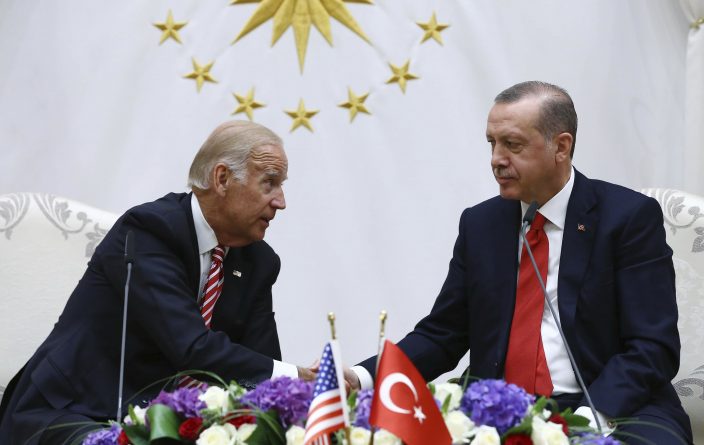 FILE- In this Wednesday, Aug. 24, 2016 file photo, then U. S. Vice President Joe Biden, left, talks to Turkey's President Recep Tayyip Erdogan during a meeting in Ankara, Turkey. Erdogan has toned down his anti-Western and anti-US rhetoric in an apparent effort to reset the rocky relationship with his NATO allies. So far, however, he’s been met by silence from U.S. President Joe Biden. Nearly two months into his presidency, Biden still hasn’t called Erdogan, which some in Turkey see as a worrying sign. (Kayhan Ozer, Presidential Press Service Pool via AP, File)

Jen Psaki, the White House press secretary, said last week that there were many world leaders Biden still hadn’t talked to and that she was sure he would call Erdogan “at some point.”

Left with few friends due to a spate of assertive foreign policy, anti-Western rhetoric and increasing authoritarianism, Turkey is now looking to attract foreign investments to rescue its troubled economy. Erdogan has been reaching out to the U.S., European nations and other former allies in a bid to patch troubled relations and end its international isolation.

Biden, who has spoken about restoring international alliances and traditional ties as well as strengthening NATO, would have an interest in rebuilding ties and trying to pull Turkey away from Russia’s sphere of influence.

But analysts say it's going to be very difficult to reset the relationship, given the range of issues where the two countries don't see eye to eye, including Turkey’s decision to acquire the advanced Russian S-400 anti-aircraft system, which Washington says poses a threat to NATO and to the U.S. F-35 fighter aircraft program. Washington kicked Turkey out of the F-35 production program and last year imposed sanctions on senior Turkish defense industry officials as well as bans on military export licenses.

Turkey argues that the Russian system, which cost the country $2.5 billion, is not a threat to the NATO alliance and it has repeatedly called for dialogue to resolve the issue. Washington insists the sanctions cannot be lifted as long as the Russian system remains on Turkish soil.

During a Senate hearing before his confirmation as U.S. secretary of state, Antony Blinken described Turkey as a “so-called strategic partner” and called it “unacceptable” for Turkey to be “in line with one of our biggest strategic competitors in Russia.”

Merve Tahiroglu of the Washington-based Project on Middle East Democracy, said it would be difficult for Erdogan to backtrack on the S-400 “because he made such a big deal about the purchase and what this would mean for Turkey’s geopolitical independence.”

American military support for Syrian Kurdish fighters to combat the Islamic State group is another point of contention. Turkey argues they are inextricably linked to a decades-long Kurdish insurgency and Defense Minister Hulusi Akar has said that ties cannot improve unless Washington halts its cooperation with the Syrian Kurdish group.

In 2019, Biden accused Trump of betraying U.S. allies, following the latter's decision to withdraw troops from northern Syria, which paved the way for a Turkish military offensive against the Syrian Kurdish group.

The Biden administration is likely to put pressure on Turkey on its energy dispute with Greece in the eastern Mediterranean, which led to a tense standoff between two NATO members. Turkey has since halted its search for energy reserves in disputed waters while Erdogan has toned down his fiery rhetoric.

Gonul Tol, director of the Middle East Institute’s Center for Turkish Studies, said Turkey cannot give concessions in the eastern Mediterranean "because it is considered a national cause by a wide segment of Turkish society.”

The Biden administration is expected to place more emphasis on democracy and human rights than Trump did. During a telephone call with Turkish Foreign Minister Mevlut Cavusoglu, Blinken underlined the “importance of democratic institutions, inclusive governance and respect for human rights” for Turkey, according to a U.S. readout of the conversation.

Last week, Erdogan pledged a series of reforms to improve human rights but analysts said they were unlikely to make a huge impact or lead to the release from prison of high-profile figures such as activist Osman Kavala, who is accused of ties to anti-government protests in 2013 as well as a 2016 failed coup attempt.

“For a true reset to happen, the Biden administration needs to see more of a democratization process ... that can come in the form of major judicial reforms or by the release of some of the most contentious political figures,” Tahiroglu said.

Turkey is also seeking the extradition of U.S.-based cleric Fethullah Gulen, whom Ankara accuses of orchestrating a failed military coup in 2016. U.S. officials say Ankara has not been able to present documents that would allow his extradition. Turkey accuses Washington of providing him shelter.

Also threatening to perturb ties is a trial against Turkish state bank, Halkbank, accused of helping Iran to evade U.S. sanctions worth $20 billion.

“If the court sentences Halkbank, it is going to be devastating for the Turkish economy and I don’t see how you can have a reset after that,” Tol said.