MYANMAR — Myanmar’s ruling junta has declared martial law in parts of the country’s largest city as security forces killed more protesters in an increasingly lethal crackdown on resistance to last month’s military coup. At least 38 people were killed Sunday and dozens were injured in one of the deadliest days of the crackdown, according to an independent group tracking the toll of the violence. SENT: 850 words, photos. 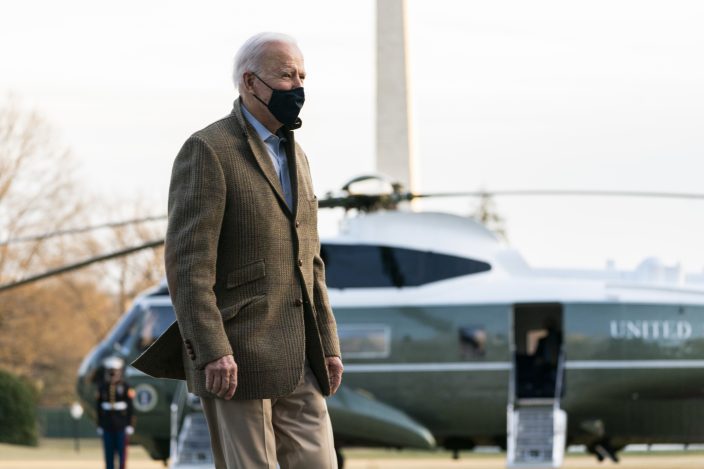 President Joe Biden walks on the South Lawn towards the gathered media members upon arrival at the White House in Washington from a weekend trip to Wilmington, Del., Sunday, March 14, 2021. (AP PhotoManuel Balce Ceneta)

REDISTRICTING-SOUTH — The partisan showdown over redistricting has hardly begun, but already both sides agree on one thing: It largely comes down to the South, its states set to be premier battlegrounds for the once-a-decade fight over redrawing political boundaries. By Nicholas Riccardi. SENT: 1,150 words, photos.

SYRIA-SURGING POVERTY — Syria is marking the 10th anniversary of the start of its conflict. President Bashar Assad is firmly in power, but millions are being pushed deeper into poverty. Lines stretch for miles outside gas stations, with an average wait of five hours to fill up one’s tank. People spend their days waiting in line to collect quotas of bread and fuel, which are hardly ever enough. On the streets in Damascus, women and children beg for food. The United Nations says more than 80% of Syrians now live in poverty, and 60% are at risk of hunger. By Zeina Karam. SENT: 1,220 words, photos. WITH: SYRIA-10 YEARS-TIMELINE (sent).

MUSIC-GRAMMYS — Female performers including Beyoncé and Taylor Swift had a record-making night at the 2021 Grammy Awards, a jam-packed but socially distanced show highlighted by live music sorely absent during the pandemic era. Four female acts won the top four prizes Sunday, including Swift, who became the first female performer to win album of the year three times, while Beyoncé — with her 28th win — became the most decorated woman in Grammy history. H.E.R. won song of the year, Billie Eilish picked up record of the year and Megan Thee Stallion was named best new artist. By Mesfin Fekadu. SENT: 900 words, photos. With GRAMMY AWARDS-THE LATEST; GRAMMY AWARDS-LIST; GRAMMY-AWARDS-FASHION.

CHINA-SINGLE MOMS — Sarah Gao is a single mother in China who has been dealing with a court case since 2017 because she could not get her maternity benefits. The vast majority of Chinese women are unable to access public benefits, ranging from paid maternity leave to prenatal exam coverage, because their legal status is officially in a gray zone. SENT: 970 words, photos. 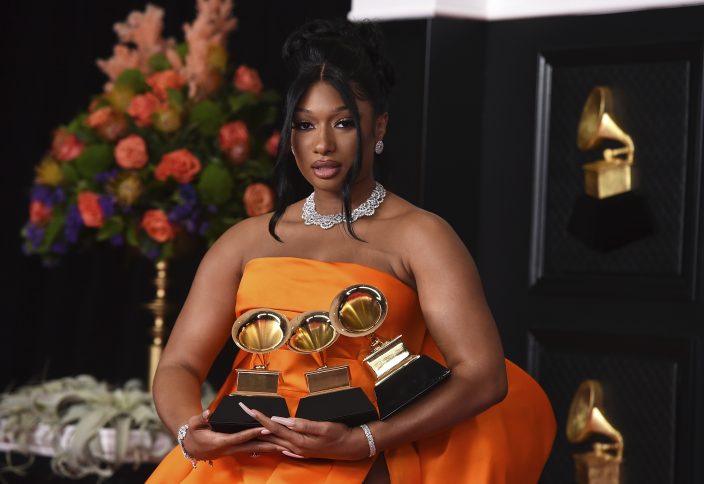 Megan Thee Stallion, winner of the awards for best rap song and best rap performance for "Savage Remix" and best new artist poses in the press room at the 63rd annual Grammy Awards at the Los Angeles Convention Center on Sunday, March 14, 2021. (Photo by Jordan StraussInvisionAP)

SUNSHINE-WEEK-GOVERNORS-EXEMPT — Some of the nation’s governors routinely block access to public records to keep the public in the dark about key decisions involving the coronavirus pandemic. Records about stay-at-home orders, business restrictions and possible influence peddling by special interests are not available in every state. Governors’ offices in Arkansas, California, Massachusetts, Michigan, New Jersey and South Dakota have thwarted records requests by The Associated Press and other news organizations, citing broad exemptions from state sunshine laws. By Stephen Groves. SENT: 1,000 words, photos.

SUNSHINE-WEEK-OPEN-MEETINGS — The coronavirus pandemic is redefining the way the American public interacts with its government. It wasn’t long ago when a public meeting of a city council or state legislature meant that constituents could attend in-person and voice concerns. Now more public bodies are livestreaming their meetings. But an Associated Press survey of state legislatures also found that most no longer allow the public inside their chambers. Some still do not allow people to testify remotely at committee hearings. Some city councils that convene remotely have also done away with verbal input from the public, allowing only written comments. By David A. Lieb. SENT: 1,100 words, photos.

CHINA-STANDSTORM — China’s capital Beijing has been enveloped in the worst sandstorm in a decade, along with a wide swath of the country’s north. Traffic was snarled and more than 400 flights out of the capital’s two main airports were canceled. SENT: 260 words, photos.

BIDEN-CUOMO — President Joe Biden has passed up an opportunity to join other Democrats calling for the resignation of New York Gov. Andrew Cuomo. SENT: 240 words, photo.

TEXAS-WOMAN REFUSES TO WEAR MASK — An arrest warrant has been issued for a woman who refused to wear a mask at a Texas bank. SENT: 440 words, photo.

IDITAROD — Dallas Seavey is leading the Iditarod Trail Sled Dog Race on Sunday, and has positioned himself for a record-tying fifth title. SENT: 520 words, photos.

SAINTS-BREES RETIRES — Record-setting New Orleans Saints quarterback Drew Brees has announced his retirement after 20 NFL seasons. “Til the very end I exhausted myself to give everything to the Saints organization, my team and the great City of New Orleans,” Brees said in social media post on Sunday. SENT: 1,480 words, photos.

VIRUS OUTBREAK — When the coronavirus pandemic shut down schools, educators had to figure out how to get kids online. Fast. With federal relief money and assistance from state governments and philanthropists, they have helped millions of students get online for distance learning. Still, a year into the pandemic, millions of others remain without internet because of financial hurdles and logistical difficulties in getting students what they need. SENT: 960 words, photo.

VIRUS-OUTBREAK-IRELAND-ASTRAZENECA-VACCINE — Irish health officials recommended the temporary suspension of the AstraZeneca vaccine after reports of serious blood clotting after inoculations in Norway. Dr. Ronan Glynn, Ireland’s deputy chief medical officer, that while there was no conclusive link between the vaccine and the cases, Irish health officials are recommending the suspension of the vaccine’s rollout as a precaution. SENT: 350 words, photo

VIRUS OUTBREAK-YO-YO MA-PERFORMANCE — Newly vaccinated Massachusetts residents were treated to a mini concert over the weekend when famed cellist Yo-Yo Ma brought out his instrument after getting his second coronavirus shot. SENT: 190 words, photos.

ASIA-US — Concerns about China’s growing influence in the region is expected to be a main focus when two ministers of President Joe Biden’s administration visits Japan for their first in-person talks with their Japanese counterparts. SENT: 570 words, photos.

HONG-KONG-PROTESTING ABROAD — Hong Kong democracy activists have launched a new push to continue their fight among residents living abroad. The move comes in the wake of a sweeping crackdown by Beijing and changes to the the semi-autonomous Chinese city’s electoral system aimed at shutting out opposition voices. SENT: 460 words, photos.

HONDURAS-ELECTIONS — Honduras President Juan Orlando Hernández’s name keeps popping up in the New York trial of an alleged drug trafficker. And one of the candidates running to replace him in Sunday’s primary elections has been convicted in the same court of laundering money for the same cartel. The court actions show just how deep are the challenges facing Honduras, a country that U.S. prosecutors have repeatedly portrayed as a narco-state where drug traffickers buy protection from politicians. SENT: 710 words, photos.

GEORGE FLOYD-OFFICER-TRIAL — Jury selection is entering its second week in the trial of a former Minneapolis police officer who is charged in the death of George Floyd. Seven jurors have been chosen so far to hear evidence in Derek Chauvin’s trial. SENT: 420 words, photos.

CAPITOL-BREACH-RESERVIST-CHARGED — An Army reservist charged with taking part in the attack on the U.S. Capitol was known as a Nazi sympathizer who wore a Hitler mustache, coworkers told federal investigators. SENT: 270 words, photos.

BKC--NCAA TOURNAMENT — Now that the 68-team field for March Madness is set, the next few days figure to be the most nerve-wracking part of the seasons. No player can show up for a game without seven negative test for COVID-19. There are deadlines for teams to be replaced, too. By National Writer Eddie Pells. UPCOMING: 810 words, photos by 4 a.m..