Jakub Voracek scored at 3:47 of overtime to give the Philadelphia Flyers a 5-4 win over the New York Rangers on Monday night.

Claude Giroux, Joel Farabee and Ivan Provorov each had a goal and an assist, and James van Riemsdyk also scored for the Flyers, who won for the third time in eight games. Sean Couturier and Voracek each had two assists, and Carter Hart finished with 20 saves. 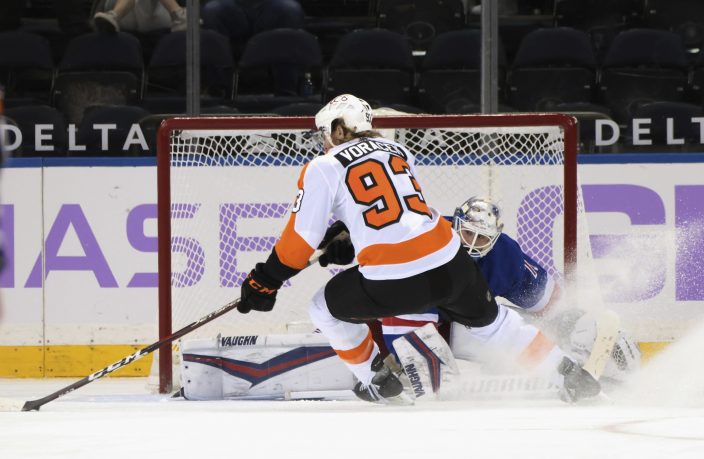 In the extra period, Voracek stole the puck from a flat-footed Panarin after Kinkaid’s soft pass up the ice, skated in alone and beat the goalie with a forehand deke for his fourth.

Rooney put the Rangers ahead 4-3, getting a pass from Brendan Lemieux and quickly putting the puck past Hart from the right circle for his fifth at 2:56 of the third. 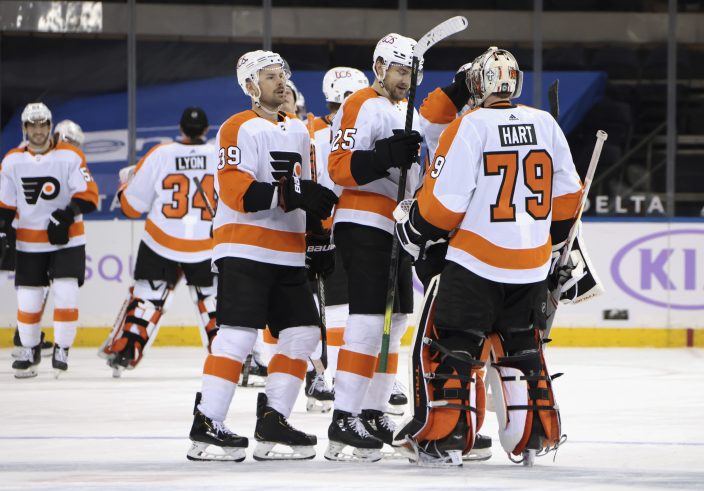 Giroux tied it again on a power play as he came around the net and tapped in a pass from Voracek from the left doorstep at 5:33.

Scott Laughton had a chance to put the Flyers ahead on a breakaway with a little more than six minutes left, but Kinkaid made a sliding pad save on his backhand try. Kinkaid stopped a breakaway by Voracek about 2 1/2 minutes later.

Kevin Hayes appeared to give the Flyers the lead with their third power-play goal of the night with about three minutes remaining, but it was overturned after the Rangers challenged for offside. 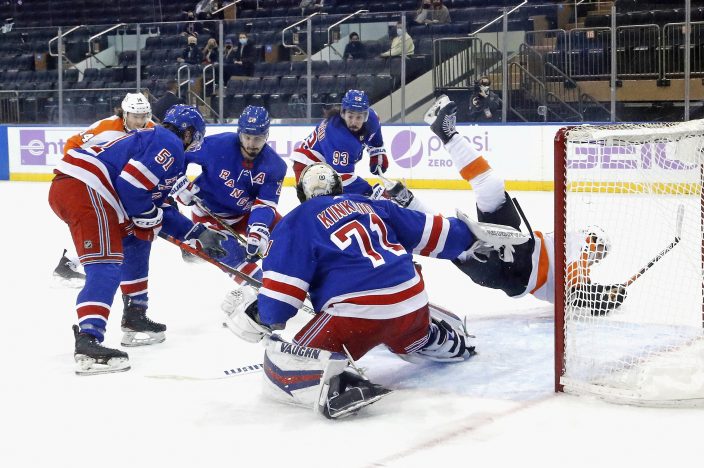 Philadelphia, which came in 5 for 19 on the power play over its last six games, finished 2 for 5 against the Rangers. New York was 20 for 21 on the penalty kill over its previous 10 games.

Trailing 2-0 after being outshot 11-6 in the first period, the Rangers came out with increased intensity in the second. They outshot the Flyers 7-0 over the first 10 minutes and scored three times in a 7:04 stretch to take the lead.

Panarin fired a one-timer from the left circle, falling down on the follow through, off a pass from rookie defenseman Tarmo Reunanen in his NHL debut at 8:12. It was Panarin’s sixth. 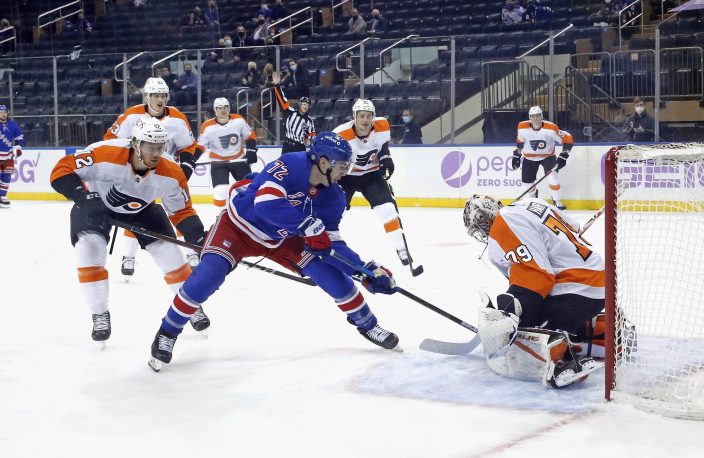 Panarin, in his second game back after missing nine during his leave of absence, then set up Blackwell with a cross-ice pass for the tying goal with 9:08 left.

Gauthier put the Rangers ahead when he skated up the right side, cut across in front of Hart and backhanded the puck past the goalie for his second with 4:44 remaining in the period.

Farabee tied it with a power-play goal with 1:24 left on a one-timer from the left circle off a pass from behind the net by Giroux. It was Farabee’s 12th. 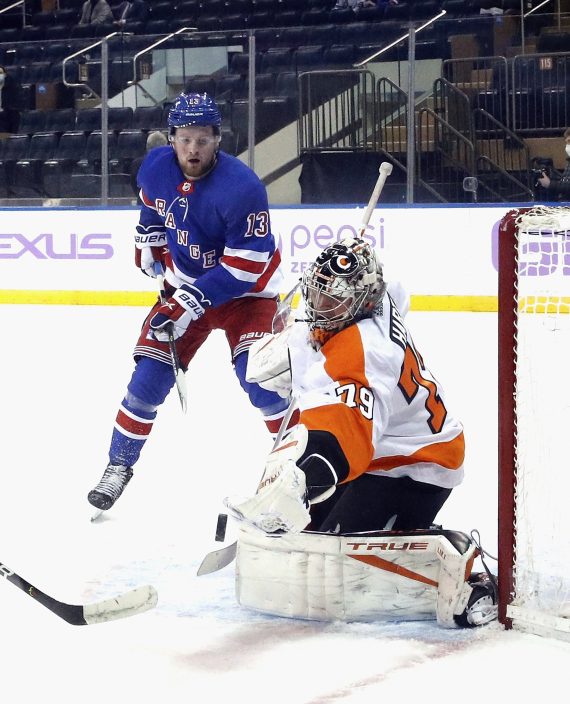 The Flyers took the lead with a pair of goals less than 80 seconds apart early in the first period.

Farabee sent a cross-ice pass to van Riemsdyk streaking toward the net and he quickly beat Kinkaid on the right side for his team-leading 13th at 3:47. It was his third goal in the last four games.

Provorov made it 2-0 as he beat Kinkaid with a long shot from beyond the left circle that got through traffic and clanged in off the right post for his fourth at 5:05. 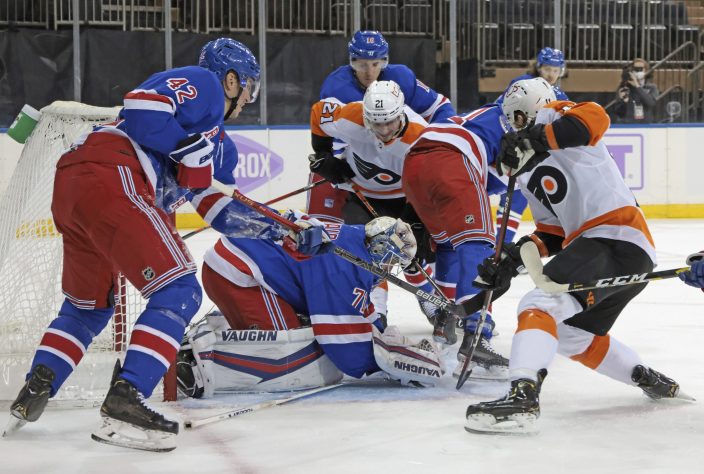 The Rangers held a moment of silence before the game to honor Walter Gretzky and Mark Pavelich, both of whom died this month. Gretzky was the father of NHL Hall of Famer Wayne Gretzky, who spent three seasons with the Rangers. Pavelich, a member of the 1980 U.S. Olympic team that won gold at Lake Placid, spent five seasons in New York.

Rangers D Adam Fox and F Pavel Buchnevich were added to the NHL’s COVID-19 protocol list earlier in the day. They joined F Phillip Di Guiseppe, who was added to the list Sunday.

Reunanen was called up from Hartford of the AHL and the 23-year-old defenseman made his NHL debut. Reunanen, selected by the Rangers in the fourth round of the 2016 draft, had two goals and three assists in eight games with the Wolf Pack this season.

F Michael Raffl returned to the Flyers’ lineup after missing four games due to a swollen right hand. Raffl centered a line with Oskar Lindblom and Nic Aube-Kubel.

Couturier has seven assists during a five-game point streak that came one game after he snapped an eight-game streak in which he had six goals and six assists.

Panarin has a goal and six assists during a four-game point streak.