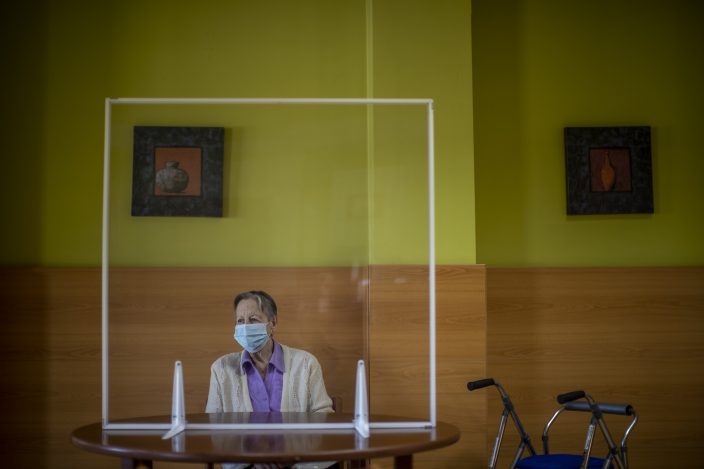 A resident awaits the visit of her family behind glass meant to protect against COVID-19 at DomusVi nursing home in Leganes, Spain, Wednesday, March 10, 2021. Spain is preparing to tighten some pandemic restrictions on movement during the approaching Easter holiday, which is a traditional period for family visits. (AP PhotoManu Fernandez)

BIDEN-100 MILLION DOSES — With the U.S. closing in on Biden’s goal of injecting 100 million coronavirus vaccinations weeks ahead of his target date, the White House announces it is now in position to help supply neighbors Canada and Mexico with millions of lifesaving shots. By Zeke Miller. SENT: 760 words, photos, video.

CONGRESS-IMMIGRATION — The House votes to unlatch a gateway to citizenship for young Dreamers, migrant farm workers and immigrants who’ve fled war or natural disasters, giving Democrats wins in the year’s first votes on an issue that faces an uphill climb before it can make progress in the Senate. By Alan Fram. SENT: 810 words, photos. With MEXICO-BORDER RESTRICTIONS — Mexico limits nonessential travel on southern border.

MYANMAR-APPAREL-SOURCING — Garment workers in Myanmar are urging major international brands to denounce the recent military coup there and put more pressure on factories to protect workers from being fired or harassed — or worse arrested and killed for participating in protests. By Business Writers Anne D’Innocenzio and Elaine Kurtenbach. SENT: 1,330 words, photos. With NKOREA-MALAYSIA — North Korea cuts ties with Malaysia over U.S. extradition. 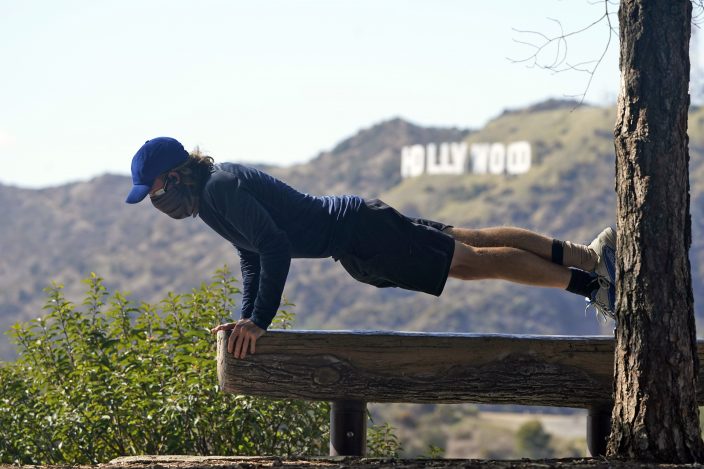 A visitor wears a mask while doing pushups on a park bench with a view of the Hollywood sign from Griffith Park amid the COVID-19 pandemic Tuesday, March 9, 2021, in Los Angeles. (AP PhotoMarcio Jose Sanchez)

GEORGE-FLOYD-OFFICER-TRIAL — Just two more jurors were needed for the trial of a former Minneapolis police officer charged in George Floyd’s death, as the judge prepared to rule on two major motions — including whether to allow evidence from Floyd’s earlier 2019 arrest. By Steve Karnowski and Amy Forliti. SENT: 510 words, photos, video. 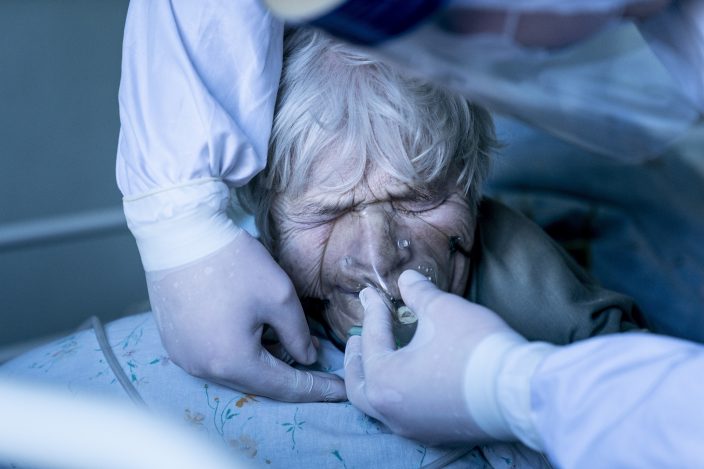 A medic wearing a special suit against coronavirus adjusts a coronavirus patient's oxygen mask at the intensive care unit at a hospital in the mining town of Selydove, 700 kilometers (420 miles) east of Kyiv, eastern Ukraine, Thursday, March 4, 2021. Ukraine received its first shipment of vaccine 500,000 AstraZeneca doses in late February. Yet, only about 19,000 people have been vaccinated since then. Ukrainians are becoming increasingly opposed to vaccination: an opinion poll this month by the Kyiv International Institute of Sociology found 60% of the country's people don't want to get vaccinated, up from 40% a month earlier. (AP PhotoEvgeniy Maloletka) 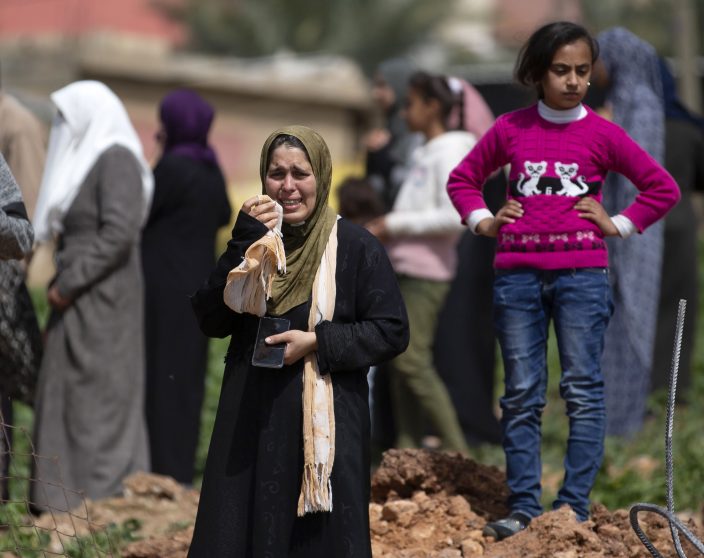 A Palestinian woman cries after a relative's house was demolished by Israeli troops because it was built without a permit, in Ain Shibli village in the Jordan Valley of the West Bank, Wednesday, March. 10, 2021. (AP PhotoMajdi Mohammed) 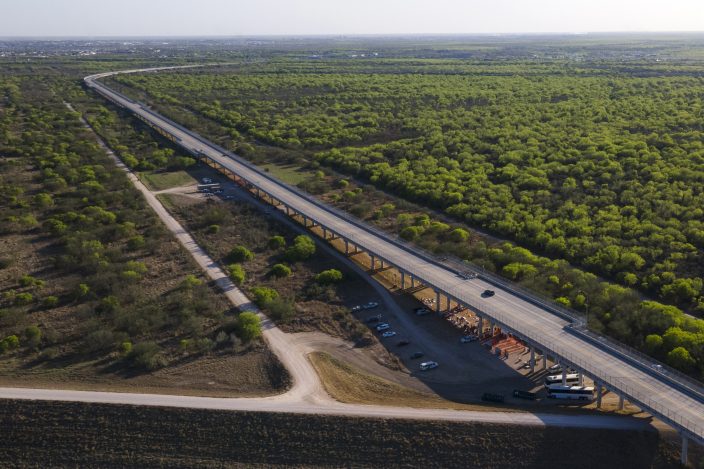 In this photo taken by a drone, a U.S. Customs and Border Protection processing area is seen under the Anzalduas International Bridge, Thursday, March 18, 2021, in Mission, Texas. A surge of migrants on the Southwest border has the Biden administration on the defensive. The head of Homeland Security acknowledged the severity of the problem Tuesday but insisted it's under control and said he won't revive a Trump-era practice of immediately expelling teens and children. (AP PhotoJulio Cortez)

UNITED-NATIONS-GLOBAL-AGEISM — U.N. report: Too much prejudice against old and young in world. SENT: 550 words. 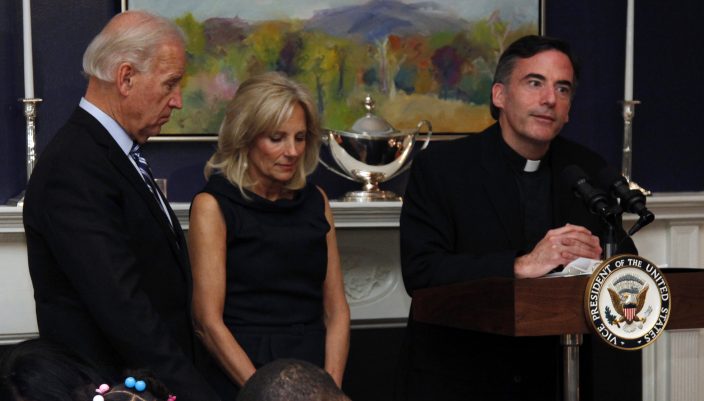 FILE - In this Nov. 22, 2010, file photo, Vice President Joe Biden, left, and his wife, Jill Biden, center, stand with heads bowed as the Rev. Kevin O'Brien says the blessing during a Thanksgiving meal for Wounded Warriors in Washington. O'Brien, the Jesuit priest who presided over an inaugural Mass for President Joe Biden, is under investigation for unspecified allegations and is on leave from his position as president of Santa Clara University in Northern California, according to a statement from the college's board of trustees. (AP PhotoCarolyn Kaster, File)

VIRUS OUTBREAK-ANIMALS VACCINATION — Around the world, many scientists and veterinarians are now racing to protect animals from the coronavirus, often using the same playbook for minimizing disease spread among people. SENT: 1,050 words, photos.

ISRAEL-REFORM RABBI — Israeli voters are poised to elect the first Reform movement rabbi to the Knesset in next week's elections. SENT: 990 words, photos.