When Matt Jones won his first PGA Tour title seven years ago, he needed a 45-foot birdie putt just to get into a playoff and then a 40-yard chip-in to take the victory.

This win was far less dramatic, yet just as meaningful.

It got him back to the Masters. 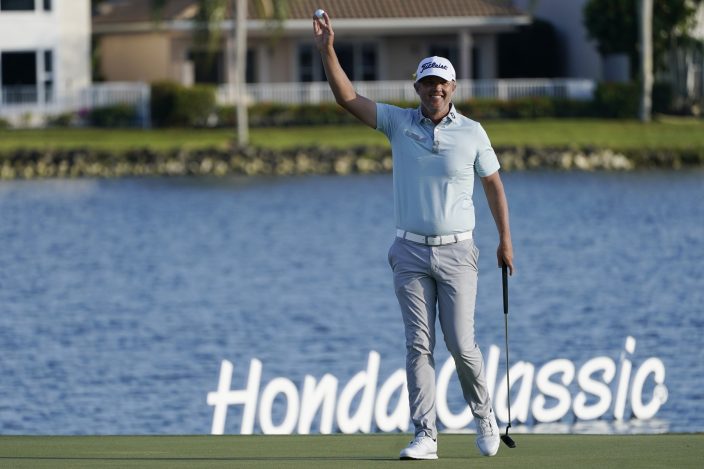 Jones won the Honda Classic by five shots Sunday, a final round of 2-under 68 good enough to finish the week at 12-under 268 at PGA National. The margin matched the largest in tournament history, tying the mark set by Jack Nicklaus in 1977 and matched by Camilo Villegas in 2010.

The 40-year-old Australian earned $1.26 million and, this time, he’ll have more than a day to prepare for the trip to Augusta National. His win at the Houston Open in 2014 — and his Masters invite — came just one day before he had to go to Augusta, making it a scramble to get family and friends together to share in the experience. The Masters starts April 8, so he’s got much more time to plan this one.

Jones started the week with a course-record-tying round of 9-under 61. He was three shots behind Aaron Wise after 36 holes after a second-round 70, and his round of 69 on Saturday was good enough to put him up by three entering Sunday.

Wise’s chances ended at the par-4 10th. He hit his second into a bunker, then four-putted from 25 feet for triple-bogey. Jones’ lead went to four, and he avoided trouble the rest of the way, while Wise finished with a 73 and tied for 13th at 4 under.

Justin Harding won the Kenya Open for his second European Tour title, closing with a 5-under 66 for a two-stroke victory.

The South African finished at 21 under. He also won the 2019 Qatar Masters

Kurt Kitayama of the United States was second. He had two eagles in a 6.

The 34-year-old Diaz closed with a 3-under 68 for a one-stroke victory over Peter Uihlein at Le Triomphe Golf and Country Club. Diaz finished at 18 under.

China's Ruixin Liu won the season-opening Carlisle Arizona Women’s Golf Classic for her fifth Symetra Tour title, beating amateur Rose Zhang with a birdie on the second hole of a playoff. Liu closed with a 3-under 69 at Longbow in Mesa to match Zhang (66) at 17-under 271. The 17-year-old Zhang win the U.S. Women’s Amateur last year. ... Jbe Kruger won the Sunshine Tour’s Gauteng Championship at Ebotse Links in Benoni, South Africa. The South African closed with a 6-under 66 to finish a 21-under, two strokes ahead of countryman Martin Rohwer.