SUPERMARKET-SHOOTING — A shooting at a crowded Colorado supermarket that killed 10 people, including the first police officer to arrive, sent terrorized shoppers and workers scrambling for safety and stunned a state that has grieved several mass killings. A lone suspect was in custody, authorities say. By Patty Nieberg and Thomas Peipert. SENT: 800 words, photos, videos. 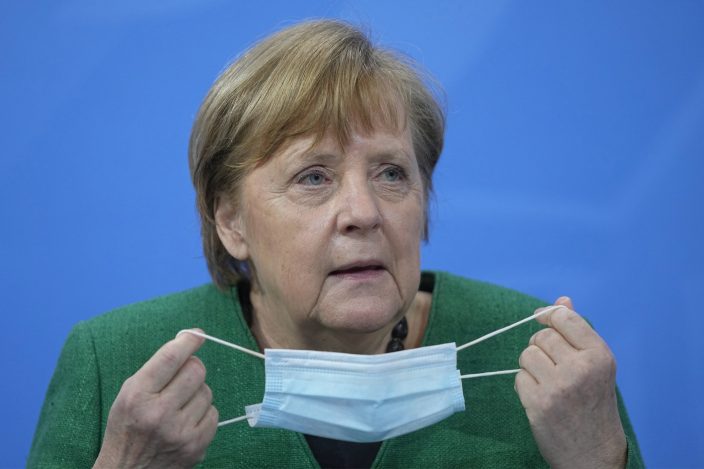 German Chancellor Angela Merkel pulls off her mask during a press conference in the Chancellor's Office following consultations between the federal and state governments in Berlin Tuesday, March 23, 2021. Germany extended its lockdown measures by another month and imposed several new restrictions, including largely shutting down public life over Easter, in an effort to drive down the rate of coronavirus infections. (Michael KappelerPool Photo via AP)

BIDEN — President Joe Biden is going to Ohio to showcase health insurance cost cuts at what may be the best time for Democrats to talk up the Affordable Care Act since it became law. Biden’s COVID-19 relief law pumps up “Obamacare” subsidies for premiums to address longstanding problems of affordability. By Alexandra Jaffe and Ricardo Alonso-Zaldivar. SENT: 630 words, photo. UPCOMING: 800 words after 4:10 p.m. event.

ISRAEL-ELECTION — Israelis begin voting in the country’s fourth parliamentary election in two years — a highly charged referendum on the divisive rule of Prime Minister Benjamin Netanyahu. Public opinion polls forecast a tight race between those who support Israel’s longest-serving premier and those who want “anyone but Bibi,” as he is widely known. By Laurie Kellman. SENT: 840 words, photos. With ISRAEL-ELECTION-EXPLAINER.

BIDEN-SYRIA — The Biden administration is mulling over America’s role in Syria’s ongoing conflict as the U.S. tries to break away from Middle East wars, but Vladimir Putin’s top diplomat has been trying to win support for a Syria approach that could establish Russia as a broker of security and power in the region. By Ellen Knickmeyer. SENT: 1,050 words, photo. 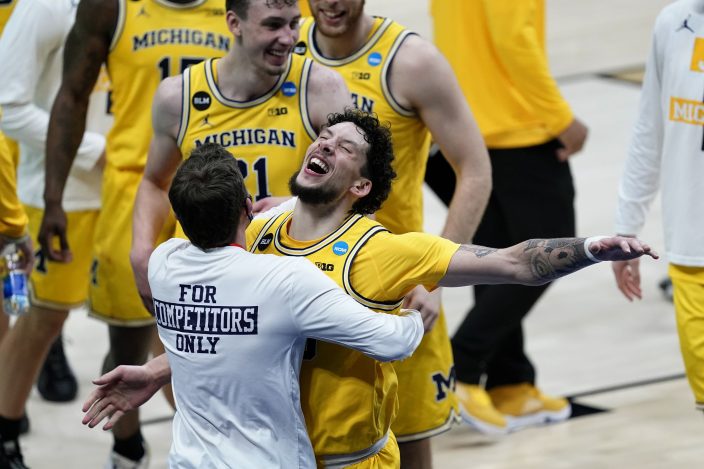 BIDEN-IMMIGRATION — The Biden administration has tried to keep the public from seeing the kind of images released Monday showing immigrant teenagers sleeping on mats in crowded conditions. Biden is facing growing criticism for the apparent secrecy at the border, including from fellow Democrats. By Nomaan Merchant, Jonathan Lemire and Josh Boak. SENT: 1,150 words, photos.

AFGHANISTAN-WARLORD — Tensions are mounting between Afghanistan’s government and a powerful local warlord, with deadly clashes erupting in a rural province between his fighters and government troops. The fear is that the violence could be a harbinger of more chaos as U.S. troops head toward the exits. By Rahim Faiez. SENT: 950 words, photos. 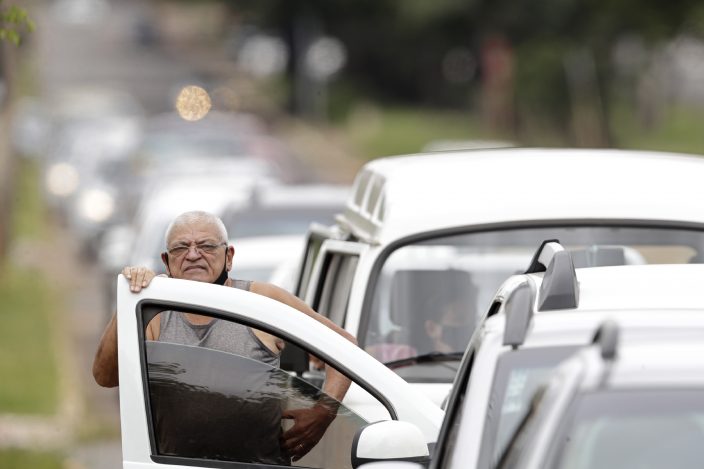 A man stands next to his vehicle in a line at a COVID-19 vaccination point for priority elderly persons in the Ceilandia neighborhood, on the outskirts of Brasilia, Brazil, Monday, March 22, 2021. (AP PhotoEraldo Peres) 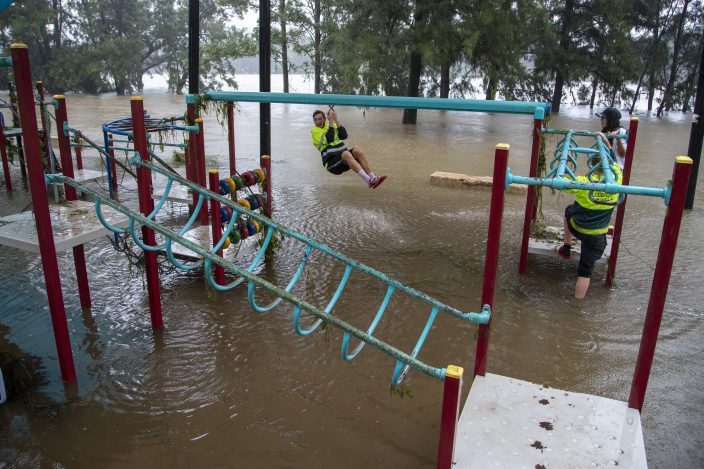 People play on equipment at a playground on the banks of the Nepean River at Jamisontown on the western outskirts of Sydney Monday, March 22, 2021. Australia's most populous state of New South Wales has issued more evacuation orders following the worst flooding in decades. (AP PhotoMark Baker)

VIRUS-OUTBREAK-GERMANY — Germany extends its lockdown measures by another month and imposed several new restrictions, including largely shutting down public life over Easter, in an effort to drive down the rate of coronavirus infections. SENT: 580 words, photos. With VIRUS-OUTBREAK-THE-LATEST. 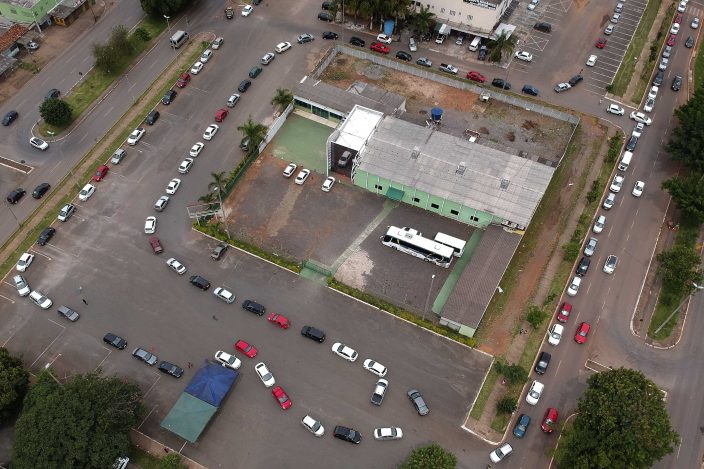 A line of vehicles curls around a COVID-19 vaccination point for priority elderly persons in the Ceilandia neighborhood, on the outskirts of Brasilia, Brazil, Monday, March 22, 2021. (AP PhotoEraldo Peres)

BIDEN-CABINET — Biden’s Cabinet is nearly complete with the confirmation of Marty Walsh as labor secretary, but the work of building his administration is just beginning. SENT: 990 words, photo, graphic. 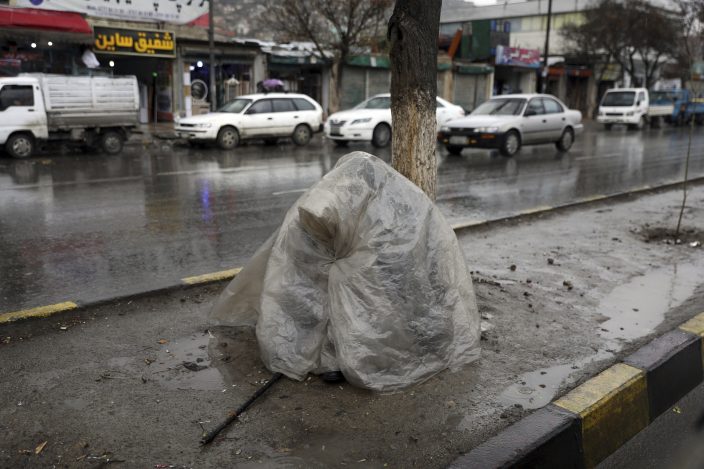 A homeless person covers herself with a plastic sheet in the rain on a sidewalk, in Kabul, Afghanistan, Monday, March 22, 2021. (AP PhotoRahmat Gul)

CONGRESS-BIDEN — Fresh off passage of the COVID-19 relief bill, Biden is assembling the next big White House priority, a sweeping $3 trillion package of investments on infrastructure and domestic needs. SENT: 710 words, photos.

ELECTION-2022-SENATE-MISSOURI — Eric Greitens, the former Navy SEAL officer who rose quickly to become Missouri governor before scandal forced him out of office just a year and a half into his tenure, announced that he will run for the Senate seat being vacated by fellow Republican Roy Blunt. SENT: 940 words, photos. With EXPLAINING-ELECTION-2022-SENATE-MISSOURI-GREITENS.

GEORGE-FLOYD-OFFICER-TRIAL — The end of jury selection is in sight at the trial of a former Minneapolis police officer charged in George Floyd’s death, with just one more needed ahead of opening statements next week. SENT: 600 words, photos.

RACIAL INJUSTICE-REPARATIONS-EVANSTON — Evanston, Illinois, becomes the first U.S. city to make reparations available to its Black residents for past discrimination and the lingering effects of slavery. SENT: 350 words.

NKOREA-CHINA — The leaders of China and North Korea are reaffirming their traditional alliance following contentious talks between top diplomats from Washington and Beijing and diplomatic isolation and economic problems in the North that have left it ever-more dependent on the Chinese. SENT: 690 words, photo. With CHINA-RUSSIA — China, Russia officials meet in show of unity against EU, U.S.; CHINA-SANCTIONS — Australia and New Zealand welcome sanctions against Chinese.

UNITED NATIONS-GENDER EQUALITY — The U.N.’s premiere global body fighting for gender equality should be tackling the yawning gap between men and women when it comes to political leadership and ensuring women have a strong voice in rebuilding economies after the COVID-19 pandemic — not arguing about preserving sexual and reproductive rights for women as it is doing now, the head of UN Women says. SENT: 770 words, photo.

STOCK-MARKET-COMEBACK — It was one year ago that the terrifying free fall for the stock market suddenly ended, ushering in one of its greatest runs. By Business Writer Stan Choe. SENT: 1,090 words, photos.