Jon Rahm is the third betting favorite at the Masters, listed by Westgate Superbook at 12-1 behind Dustin Johnson and Bryson DeChambeau. The Spaniard might suggest a prop bet on whether he starts or finishes the tournament.

His first child is due on Masters weekend, and Rahm made it abundantly clear where his priorities are.

“All I can say is if anybody’s thinking of betting on me on the Masters, maybe think about it twice because there’s a chance I have to just turn around and leave that week,” he said Tuesday from the Dell Technologies Match Play. 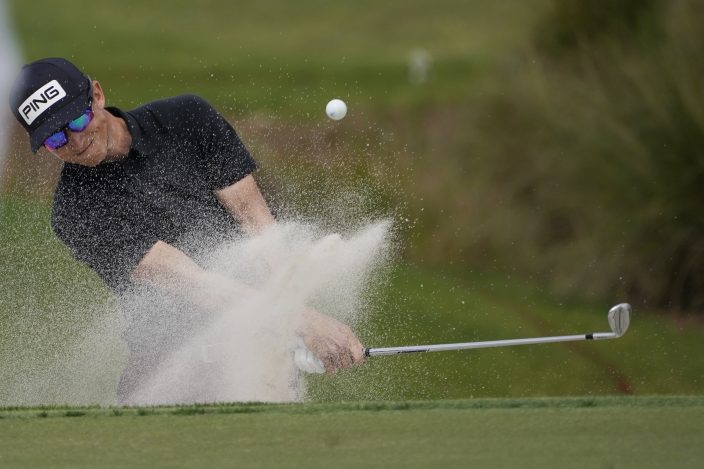 Brandon Hagy hits from the sand on the third hole during the third round of the Honda Classic golf tournament, Saturday, March 20, 2021, in Palm Beach Gardens, Fla. (AP PhotoMarta Lavandier)

“I’m trying to take it one day at a time,” he said. “And I can tell you I’m ready to go at any moment’s notice, to be honest. If it happens today, I can go to the hotel and be gone quick. So happy about it. That’s all I can say.”

The most famous pledge came from Phil Mickelson at the 1999 U.S. Open at Pinehurst No. 2. He carried a pager in his golf bag and said he would leave if his wife went into labor with their first child. Amy Mickelson gave birth to their daughter the day after Mickelson finished one shot behind Payne Stewart. 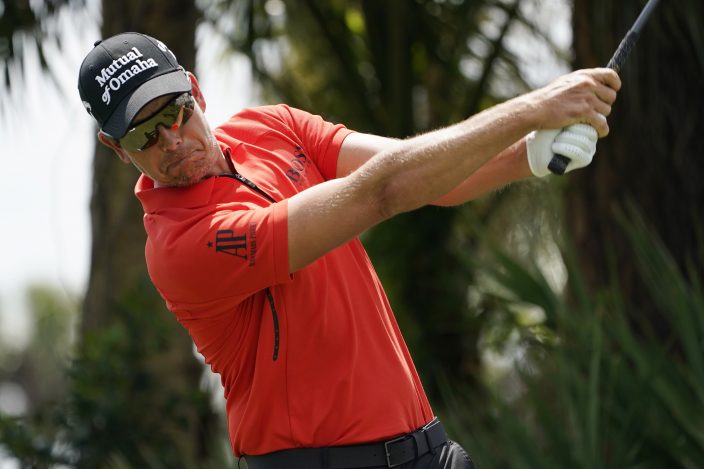 Henrik Stenson, of Sweden, hits from the second tee during a practice round of the Honda Classic golf tournament, Wednesday, March 17, 2021, in Palm Beach Gardens, Fla. (AP PhotoMarta Lavandier)

“If I have to leave this week, hopefully it doesn’t come when I’m in the final and I just have to leave after nine holes,” Rahm said. “That would be unfortunate for the winner, but it is what it is. Being a father is much more important than any golf event would ever be, so that’s my head right now.”

The Honda Classic had one of its weakest fields based on the world ranking, not helped by Brooks Koepka and Daniel Berger being late withdrawals. It’s easy to blame the schedule, and moving it around — odds are the Honda Classic will start the Florida swing next year — only helps so much. The early season is packed with appealing events.

It wasn’t much different in the prime of Jack Nicklaus, who never played more than 18 times a year in the 1970s, when he won eight of his 18 majors. He faced as much pressure as anyone today.

“You’ve got some tournaments that you’re never probably going to go to, just because it didn’t work,” Nicklaus said at the Honda Classic. “And then you’ve got some you’d like to work in. And I used to try to take two or three every year that I hadn’t played and try to work that into the calendar.”

Nicklaus changed up his schedule every year and played 11 different tournaments. He would play San Diego and Hawaii one year, Jacksonville and Los Angeles the next. He played Bay Hill and New Orleans, and another year played Hilton Head.

Nicklaus played three times between the Masters and U.S. Open during that span. The Tournament of Champions used to be after the Masters. Nicklaus played the Byron Nelson one year and Philadelphia the next. He usually played Atlanta, but also added Memphis and Colonial.

“That’s sort of what I tried to do to try to mix it up a little bit,” he said.

As much as Justin Thomas and Tiger Woods enjoy trading barbs, Thomas says the conversation starts out differently with Woods recovering from serious leg injuries from his Feb. 23 car crash in Los Angeles.

“I want to make sure he’s doing all right and feeling well,” Thomas said.

He said his father and Woods were texting during the final round at The Players Championship when Thomas closed with a 68 for a one-shot victory. Thomas also said he had a video chat with Woods the day before Woods returned home to Florida.

Thomas essentially sealed his victory with his tee shot on the 18th at the TPC Sawgrass, a tight draw that hugged the water and left him a wedge into the green. It was a bold shot. Or was it a happy accident?

“He told me that I toed my tee shot on 18, which I didn’t,” Thomas said. “I hit it right in the middle, I just overturned it a little bit. But he’s adamant that I toed it. But I made sure to remind him that I didn’t. It was right where I needed to be.”

One week can change so much. Just ask Brandon Hagy.

After recovering from a back injury, he regained a full PGA Tour card (without having to rely on a major medical extension) at the Korn Ferry Tour Finals in 2019.

He failed to make the cut in nine out of the 17 events he played, with no top 10s. He would have lost his card except for the COVID-19 pandemic and the decision that no one should lose status in a shorter season.

The next season wasn't much better. Hagy missed seven cuts in 11 starts through the Puerto Rico Open, with no top 20s. He was well down the alternate list at the Honda Classic and was among the last to get in Thursday without having played a practice round.

And then then 30-year-old Californian took it from there. Even though he fell back with a 76 on Saturday, he closed with a 66. That turned into a solo runner-up with so much backpedaling Sunday, and it made a world of difference. Along with $763,000, he earned 300 FedEx Cup points and moved from No. 172 to No. 77.

He is close to locking up his card for next year.

“It’s been an interesting couple years,” Hagy said. “Obviously, the pandemic, technically I lost my card last year, but still having an opportunity to play out here this year, I was pretty far down the FedEx Cup coming into this week. But this is a good week for me to set up the rest of the season.”

Lucas Herbert has a sponsor exemption to play in the Dominican Republic. The Australian also is the first alternate for the Match Play. That means being in two places, though maybe not at once.

Players are required to compete in a World Golf Championship if they are eligible. That means Herbert was in Austin on Tuesday in case one of the 64 players at the Match Play withdrew.

The tour said his plan was to leave Texas on Wednesday morning — assuming no one pulled out — and head to the Puntacana resort for the Thursday start of the opposite-field event.

Masters champion Dustin Johnson is sharing a locker at Augusta National with Fuzzy Zoeller. ... Henrik Stenson dropped out of the top 100 in the world for the first time since November 2012. ... The USGA has acquired a selection of artifacts from the estate of renowned architects Pete and Alice Dye. The collection will be preserved at the USGA Golf Museum and Library. It includes more than 50 items from their life and career together. ... The Corales Puntacana Resort & Club Championship in the Dominican Republic will crown a champion 182 days apart because of a postponement to September last year. It's the fewest days between PGA Tour events since what is now called the Valspar Championship switched from the fall to the spring in 2007 (133 days).

Phil Mickelson tied for 35th at The Players Championship and tied for 25th at the Honda Classic. It was the first time he posted consecutive finishes in the top 50 since February 2020.

“I’m not a fake person. I can't be a fake person. You can tell by my facial expressions on the golf course. I can’t hide what I’m thinking or feeling.” — Jon Rahm.