SUPERMARKET-SHOOTING — Law enforcement officials and former associates of a 21-year-old accused of killing 10 people at a Colorado supermarket described the suspect as someone prone to sudden rage who was suspended from high school for a sudden attack on a classmate that left the student bloodied. By Patty Nieberg, Thomas Peipert and Colleen Slevin. SENT: 980 words, photos. With SUPERMARKET-SHOOTING-VICTIMS — Colorado shooting victims: Store staffers, police officer, photographer. 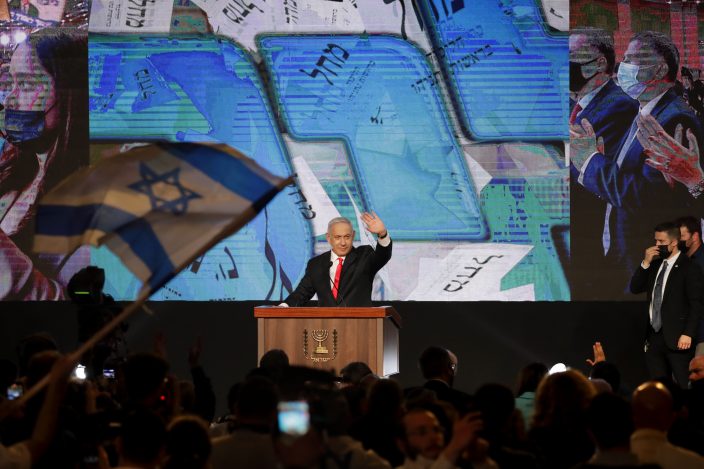 SUPERMARKET-SHOOTING-COLORADO — Colorado’s latest mass shooting is part of a long and bloody history for the state, which has become infamous for massacres. The 1999 Columbine shooting is blamed by some experts for kicking off a fascination with mass shootings that inspires new attacks to this day. The 2012 Aurora theater shooting moved the terror from schools to movie theaters. Its shootings may have helped tip the state to Democrats. Activists are now hoping for a new wave of gun control measures after the Boulder attack. By Nicholas Riccardi. SENT: 1,230 words, photos. Also see MORE ON THE COLORADO SHOOTING below.

MYANMAR-JOURNALISTS — Thein Zaw, a journalist for The Associated Press who was arrested last month while covering a protest against the coup in Myanmar, told his family he has been informed he is being released from detention. He was one of nine media workers taken into custody during the Feb. 27 street protest in Yangon, the country’s largest city, and had been held without bail. SENT: 300 words, photos. UPCOMING: Developing, will be updated. With MYANMAR — Myanmar junta frees hundreds held for anti-coup protests.

ISRAEL-ELECTION — Israeli parliamentary elections resulted in a virtual deadlock for a fourth time in the past two years, exit polls indicated, leaving Prime Minister Benjamin Netanyahu with an uncertain future and the country facing the prospect of continued political gridlock. That raised the possibility of an unprecedented fifth consecutive election later this year. By Josef Federman. SENT: 1,270 words, photos. 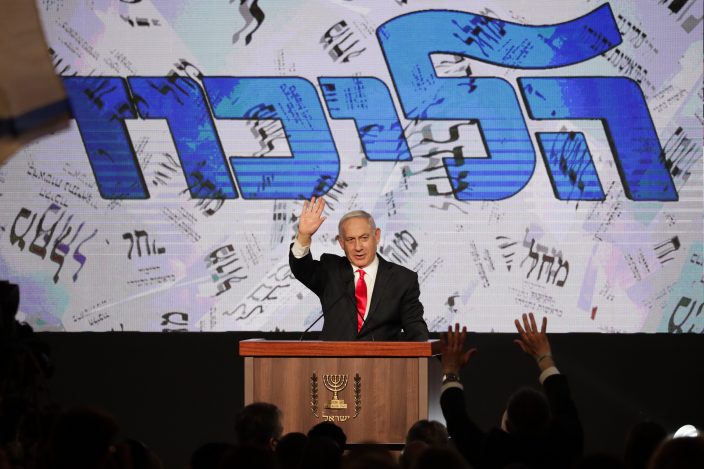 HONG-KONG-VACCINES-SUSPENDED — Hong Kong suspended use of the Pfizer vaccine after its Chinese distributor informed the city that one batch had defective bottle lids. The city’s government says the suspension was immediate while the matter is investigated by distributor Fosun Pharma and BioNTech, the German company which created the vaccine with American pharmaceutical firm Pfizer. By Zen Soo. SENT: 380 words, photos.

VIRUS OUTBREAK-REOPENING SCHOOLS — A new federal survey finds that nearly half of the nation’s elementary schools were open for full-time, in-person instruction last month, but the share of students learning in-person varies greatly by region and race. By Collin Binkley. SENT: 1,010 words, photo. 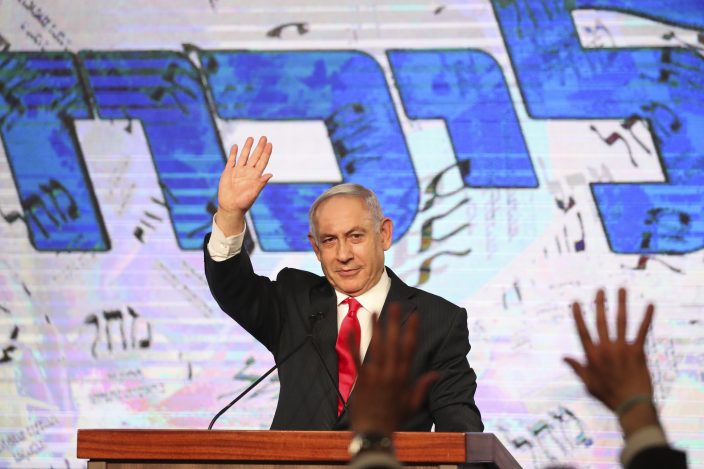 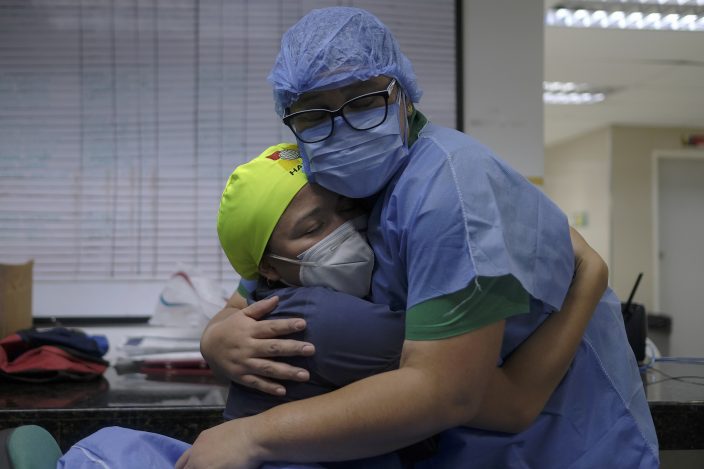 MORE ON THE COLORADO SHOOTING

SUPERMARKET SHOOTING-GUN LAWS — The city of Boulder, Colorado, tried to ban assault weapons in hopes of preventing a mass shooting, but just 10 days before Monday’s rampage, the measure was blocked in court after a lawsuit backed by the National Rifle Association. SENT: 920 words, photos. 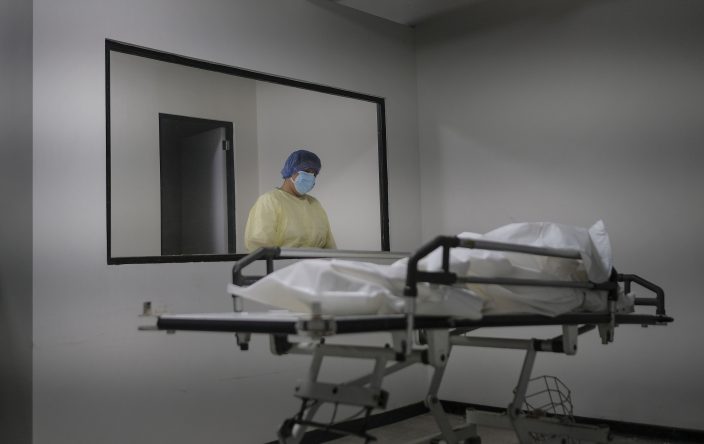 Jessi Duran looks through a window at the body of her aunt who died from COVID-19 at the Ana Francisca Perez de Leon II public Hospital in Caracas, Venezuela, Tuesday, March 23, 2021. (AP PhotoMatias Delacroix) 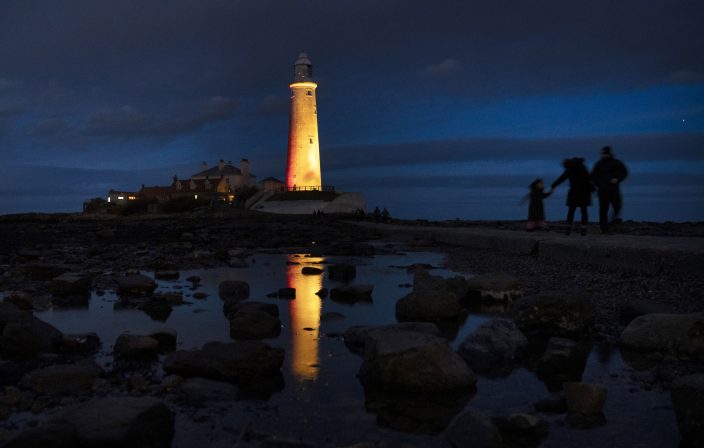 St Mary's Lighthouse is illuminated yellow during the National Day of Reflection, on the anniversary of the first national lockdown to prevent the spread of coronavirus, in Whitley Bay, England, Tuesday March 23, 2021. Britain is marking the anniversary of being in lockdown for one year because of the pandemic, by illuminating public buildings in yellow light.(Owen HumphreysPA via AP)

LONDON-BEYOND-THE-PANDEMIC-THE-TUBE — Even as many of its famous institutions closed during the coronavirus pandemic for most of the past 12 months, London’s Underground kept running through three successive lockdowns. SENT: 1,040 words, photos. 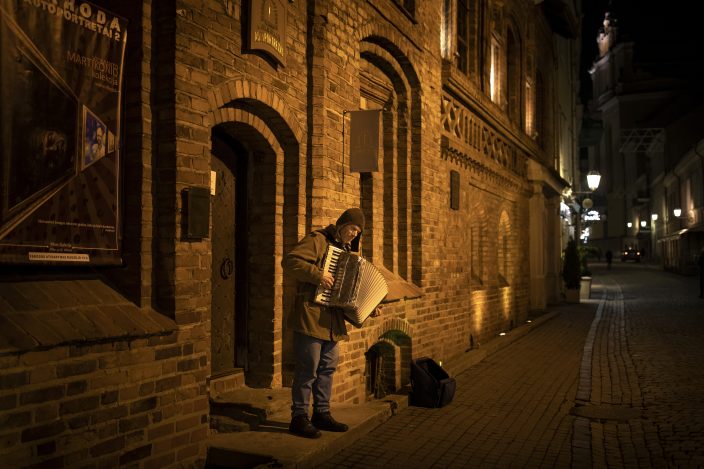 A street musician plays his accordion on a frosty spring evening in an empty Old Town in Vilnius, Lithuania, Tuesday, March 23, 2021. The quarantine restrictions have contributed to slowing the spread of the coronavirus (COVID-19) in Lithuania, but morbidity rates are still high. (AP PhotoMindaugas Kulbis)

BIDEN-AGENDA — Two mass shootings have overshadowed Biden’s “Help is Here” tour, and the White House has also struggled to respond to the growth in unaccompanied minors crossing the U.S.-Mexico border or to blunt a nationwide effort by Republican legislatures to tighten election laws. SENT: 1,030 words, photos.

CONGRESS-GUNS — Senate Democrats say they are pushing toward a vote on expanded gun control measures, but prospects for any major changes are dim in the closely divided Congress. SENT: 1,070 words, photos, video. 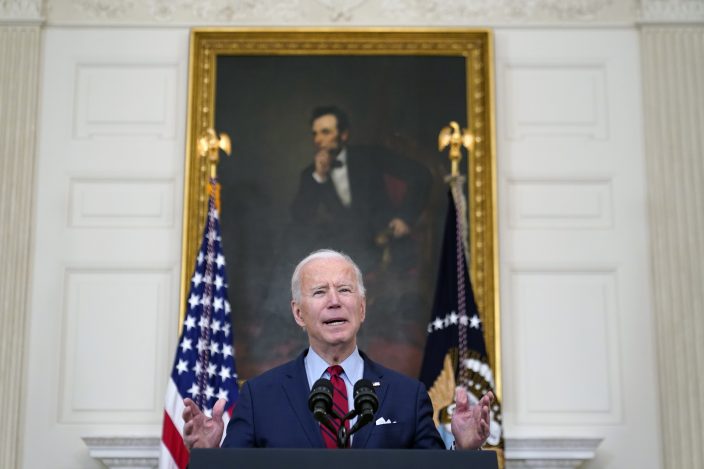 President Joe Biden speaks about the shooting in Boulder, Colo., Tuesday, March 23, 2021, in the State Dining Room of the White House in Washington. (AP PhotoPatrick Semansky)

MASSAGE-BUSINESS-SHOOTINGS-LEGISLATION — Democratic lawmakers in Georgia have introduced a slate of legislation in response to the recent shootings at massage businesses in metro Atlanta that left eight people dead, including six women of Asian descent — though it’s unlikely the bills will see movement anytime soon. SENT: 840 words, photos.

GEORGE-FLOYD-OFFICER-TRIAL — A jury has been seated for the trial of a former Minneapolis police officer in George Floyd’s death, with opening statements set for Monday in a case that led to weeks of protests and a national soul-searching about racial justice. SENT: 880 words, photos, video.

BANGLADESH-INDEPENDENCE — On the eve of marking 50 years of independence this month, Bangladesh has been hailed as a success story for a young nation born out of strife and turbulence. SENT: 1,190 words, photos.

INDIA-LOCKDOWN-LIVES-ALTERED — One year after India went into a coronavirus lockdown, the ripples it created remain prevalent in society. SENT: 970 words, photos.

EGYPT-SUEZ-CANAL — A cargo container ship that’s among the largest in the world has turned sideways and blocked all traffic in Egypt’s Suez Canal, officials say, threatening to disrupt a global shipping system already strained by the coronavirus pandemic. SENT: 690 words.

OBIT-GEORGE SEGAL — George Segal, the banjo player turned actor who was nominated for an Oscar for 1966′s “Who’s Afraid of Virginia Woolf?” and worked into his late 80s on the ABC sitcom “The Goldbergs,” died in Santa Rosa, California, his wife said. He was 87. By Entertainment Writer Andrew Dalton. SENT: 990 words, photos.

TIM DAHLBERG-BASEBALL CHANGES — That Major League Baseball is finally trying to do something about the way the game is played underscores the threat now being posed to the sport. By Sports Columnist Tim Dahlberg. SENT: 760 words, photos.

TOKYO-TORCH-RELAY — The Olympic torch relay is usually just a sideshow for the real thing; the prelude, the buildup, the warm-up act that could be skipped. Not this time. By Sports Writer Stephen Wade. SENT: 770 words, photos.