SUPERMARKET SHOOTING — Hundreds of mourners gathered at a candlelight vigil to remember the 10 people gunned down at a supermarket in a Colorado college town, while the 21-year-old man suspected of carrying out the rampage prepared for his first court appearance. Ahmad Al Aliwi Alissa has been jailed for investigation of murder since he was arrested inside the King Soopers supermarket in Boulder. By Colleen Slevin and Patty Nieberg. SENT: 730 words, photos. 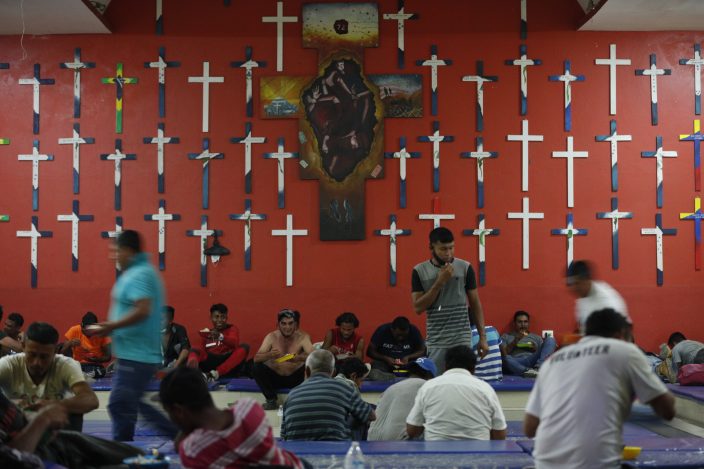 SUPERMARKET SHOOTING-HOW THEY GOT THEIR GUNS — The suspects in the most recent shooting sprees found it relatively easy to get their guns. The Colorado suspect was convicted of assaulting a high school classmate but still got a gun. The man accused of opening fire on three Georgia massage businesses bought his gun just hours before the attack. By Michael R. Sisak. SENT: 1,940 words, photos.

VIRUS-OUTBREAK-ASTRAZENECA — AstraZeneca insisted that its COVID-19 vaccine is strongly effective even after counting additional illnesses in its disputed U.S. study, the latest in an extraordinary public rift with American officials. In a late-night press release, AstraZeneca said it had recalculated data from that study and concluded the vaccine is 76% effective in preventing symptomatic COVID-19, instead of the 79% it had claimed earlier in the week. By Medical Writer Lauran Neergaard. SENT: 500 words, photo.

VIRUS OUTBREAK-BRAZIL-300K DEATHS — Brazil was in political disarray as it surpassed 300,000 deaths from COVID-19, the second nation to hit the grim landmark after the United States. By Mauricio Savarese and Débora Álvares. SENT: 1,130 words, photos. With VIRUS-OUTBREAK-THE-LATEST. 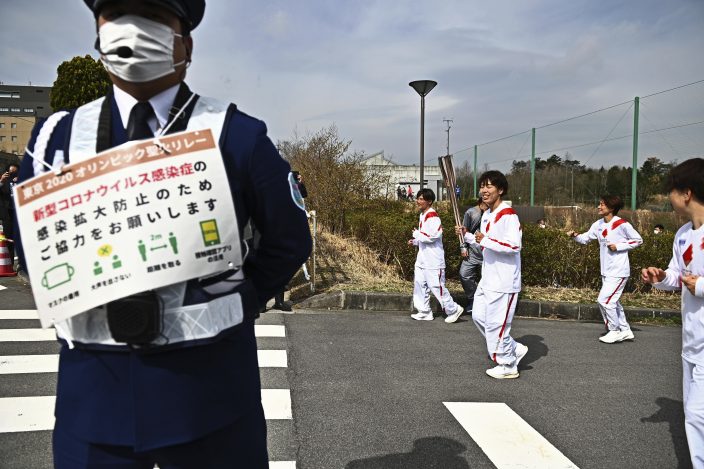 Japanese Azusa Iwashimizu, a member of Japan women's national football team, carries an Olympic Torch as a guard with a sign for coronavirus precautions during the torch relay grand start outside J-Village National Training Center in Naraha, Fukushima prefecture, northeastern Japan, Thursday, March 25, 2021. The torch relay for the postponed Tokyo Olympics began its 121-day journey across Japan on Thursday and is headed toward the opening ceremony in Tokyo on July 23. (Philip FongPool Photo via AP)

IMMIGRATION-MIGRANT-CHILDREN — Amid a dramatic rise in migrant children and families arriving at the U.S.-Mexico border to seek asylum, many are kept at outdoor intake sites and overcrowded detention facilities well past a 72-hour court-imposed limit. From there, the families are either released into the U.S. or expelled to Mexico. The lucky ones dropped off at a COVID-19 testing site with a package of documents. The unaccompanied children are taken to federal shelters that are quickly filling up as well. By Adriana Gomez Licon and John Mone. SENT: 850 words, photos, video. With IMMIGRATION-TOWN EMERGENCY — Arizona town calls state of emergency over migrant arrivals.

BIDEN — President Joe Biden is holding his first news conference since taking office. The White House hopes to use the moment to celebrate passage of its giant COVID relief package, but Biden is sure to face questioning about a growing list of challenges facing the administration. By Jonathan Lemire and Zeke Miller. SENT: 830 words, photos. UPCOMING: 990 words after 1:15 p.m. event. With BIDEN-IMMIGRATION — Biden taps Vice President Kamala Harris to lead response to border challenges. 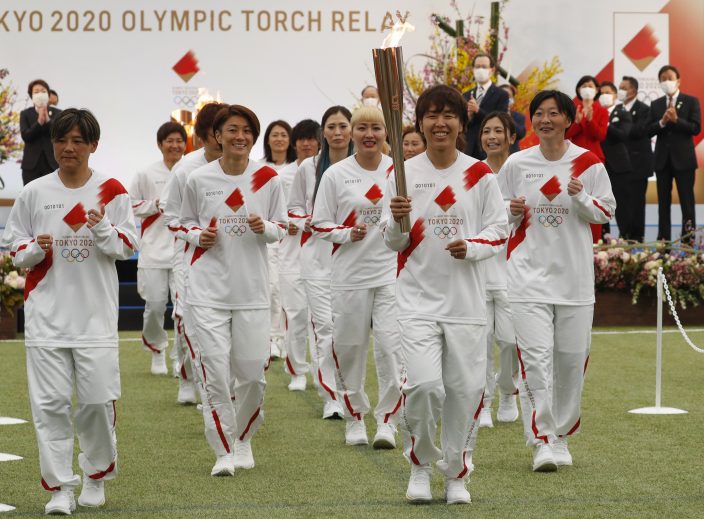 Azusa Iwashimizu with other members of "Nadeshiko Japan," Japan's women's national soccer team, leads the torch relay in Naraha, Fukushima prefecture, northeastern Japan, Thursday, March 25, 2021. The torch relay for the postponed Tokyo Olympics began its 121-day journey across Japan on Thursday and is headed toward the opening ceremony in Tokyo on July 23. (Kim Kyung-HoonPool Photo via AP) 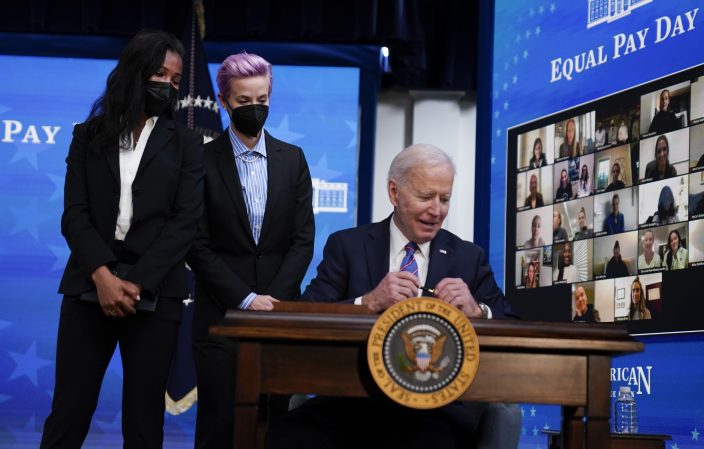 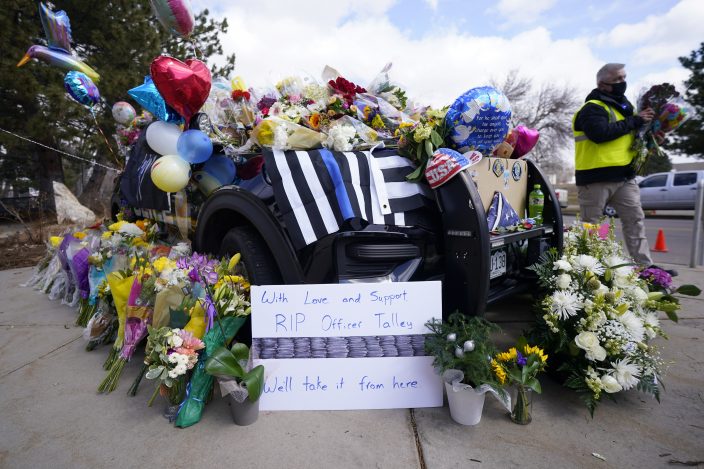 Bouquets of flowers are placed around a police cruiser in tribute to Boulder, Colo., police officer Eric Talley, who was one of 10 victims in Monday's mass shooting at a King Soopers grocery store, Wednesday, March 24, 2021, in Boulder, Colo. (AP PhotoDavid Zalubowski) 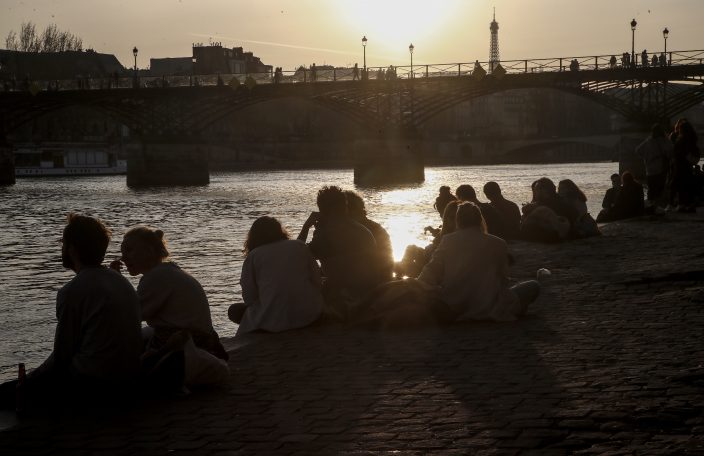 People enjoy the sunset as they sit along the Seine river bank in Paris, Wednesday, March 24, 2021. The French government has backed off from ordering a tough lockdown for Paris and several other regions despite an increasingly alarming situation at hospitals with a rise in the number of COVID-19 patients. Eiffel Tower in the background. (AP PhotoMichel Euler)

VIRUS OUTBREAK-NURSING HOMES — Lawmakers of both parties are urging the Biden administration to require disclosure of vaccination rates for nursing home residents and staff, and to make it easy for family members, advocacy groups and researchers to access such potentially critical details. SENT: 710 words, photo.

VIRUS-OUTBREAK-HONG-KONG-VACCINE — Hong Kong’s sudden suspension of a COVID-19 vaccine developed by Pfizer and BioNTech is another blow to a vaccination program already struggling against a wall of public distrust. SENT: 1,010 words, photos. 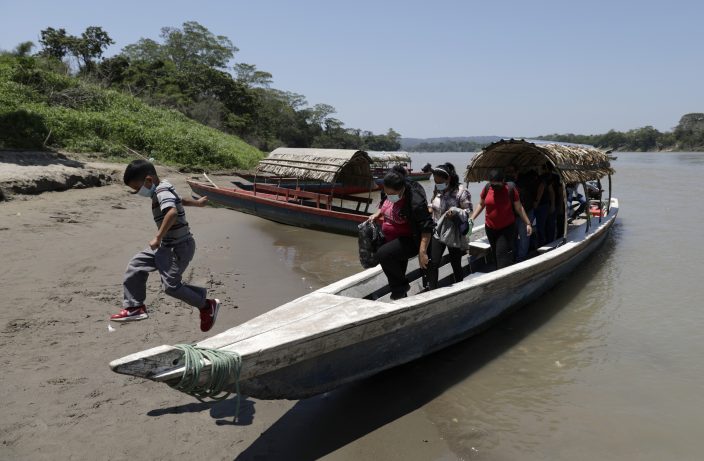 Migrants disembark on the Mexican side of the border after crossing the Usumacinta River from Guatemala, in Frontera Corozal, Chiapas state, Mexico, Wednesday, March 24, 2021. (AP PhotoEduardo Verdugo)

CONGRESS-ELECTIONS BILL — Democrats renew their efforts to muscle through the largest overhaul of U.S. elections in a generation. SENT: 1,030 words, photo. 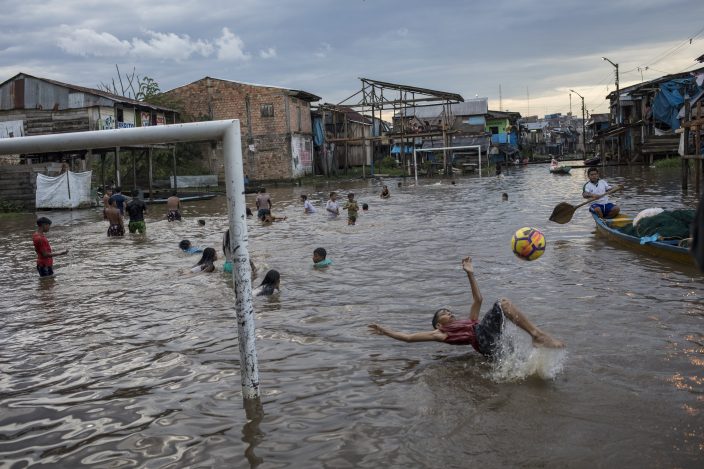 A boy bicycle kicks a ball in a flooded area of the Belen community in Iquitos, Peru, Saturday, March 20, 2021. Despite a scandal that shook the government in Peru's capital when over 480 government officials took advantage of their privileged positions to secretly receive early inoculations ahead of healthcare workers battling the new coronavirus pandemic, 66 people with connections in Iquitos jumped the queue this week to be vaccinated against COVID-19. (AP PhotoRodrigo Abd)

CHINA-XINJIANG-FOREIGN-BRANDS — China’s ruling Communist Party is lashing out at H&M and other clothing and footwear brands as it retaliates for Western sanctions on Chinese officials accused of human rights abuses in the Xinjiang region. By Business Writer Joe McDonald. SENT: 680 words, photos.

FINANCIAL-MARKETS — Shares advanced in Asia after a broad decline on Wall Street led by selling of tech heavyweights like Facebook and Apple. By Business Writer Elaine Kurtenbach. SENT: 610 words, photos.

NCAA-DIVERSITY DEFICIENCY — When Dawn Staley and Joni Taylor embraced before and after the SEC Tournament championship, it marked the first time in 41 years that two Black women coaches met in the tournament championship of a Power Five conference. By Sports Writer Teresa M. Walker. SENT: 980 words, photos.

TOKYO-TORCH-RELAY-START — The torch relay for the postponed Tokyo Olympics begins its 121-day journey across Japan and is headed toward the opening ceremony in Tokyo on July 23. By Sports Writer Stephen Wade. SENT: 790 words, photos. With TOKYO-TORCH RELAY-PHOTO GALLERY.