WHO-CHINA — A joint WHO-China study on the origins of COVID-19 says that transmission from bats to humans through another animal is the most likely scenario and that a lab leak of the coronavirus is “extremely unlikely.” A draft copy was obtained Monday by The Associated Press. The findings were largely as expected, and left many questions unanswered. The team proposed further research in every area except the lab leak hypothesis. The report’s release has been repeatedly delayed, raising questions about whether the Chinese side was trying to skew the conclusions. The AP received what appeared to be a near-final version from a Geneva-based diplomat from a WHO-member country. By Ken Moritsugu. SENT: 430 words, photos, video. 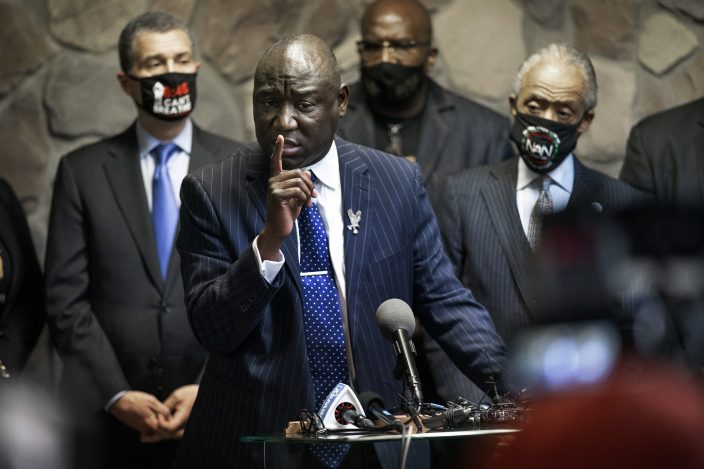 Attorney Ben Crump speaks at a news conference with Al Sharpton and members of George Floyd's family at Greater Friendship Church, Sunday, March 28, 2021, in Minneapolis. Opening statements are set for Monday in the trial of a former Minneapolis police officer charged with murder and manslaughter in George Floyd's death. (Jerry HoltStar Tribune via AP)

VIRUS OUTBREAK-CHILD ABUSE — An Associated Press analysis has found that reports of child abuse plummeted during the coronavirus pandemic, as children are out of the public eye and away from usual reporters of welfare problems. The AP analyzed more than a dozen indicators in 36 states. The findings reveal how the pandemic has ripped away systemic safety nets and showed signs in various states that officials are dealing with more urgent cases. AP found that child abuse reports, investigations, substantiated allegations and interventions dropped. More than 400,000 fewer child-welfare concerns were reported during the pandemic compared with the same time period of 2019. There were 200,000 fewer child abuse and neglect investigations and assessments. That’s a national total decrease of 18% in each category. By Sally Ho and Camille Fassett. SENT: 2,620 words, photos. There is an abridged version of this story.

VENEZUELA-SWISS BANKER -- The all-star witness to a U.S. criminal investigation that seeks to untangle how Venezuelan kleptocrats stole billions in oil wealth from their country recounts to The Associated Press his remarkable journey from the German-born son of a Lutheran pastor to banker of choice to Venezuela’s ruling elite. By Joshua Goodman. SENT: 2,710 words, photos. An abridged version is also available.

EGYPT-SUEZ CANAL — Engineers have partially refloated the container ship that is wedged across the Suez Canal. But the massive ship is still blocking traffic and there are no details about when it might be fully freed. By Isabel DeBre and Samy Magdy. SENT: 760 words, photo. WITH: SUEZ CANAL-ECONOMIC IMPACT — Delays in freeing a mammoth container ship stuck in Egypt’s Suez Canal have highlighted still more pressure points in global trade, a year after supply chains were disrupted by the pandemic. BY Alex Veiga. SENT: 850 words, photos.

SYRIA-DIMINISHING AID — The humanitarian situation across war-ravaged Syria is worsening. But it’s been getting tougher every year to raise money from global donors to help people affected by the country’s protracted humanitarian crisis. Pledges had already been dropping off before the coronavirus pandemic, mainly due to donor fatigue. Officials fear that with the global economic downturn spurred by the pandemic, international assistance for Syria is about to take a new hit just when it’s needed most. The aid community is bracing for significant shortfalls ahead of a donor conference that starts on Monday in Brussels and is being co-hosted by the United Nations and the European Union. By Sarah El Deeb. SENT: 980 words, photos.

PARK RANGERS-GUNFIRE — Everglades National Park rangers say a man who fired a gun at them was involved in a domestic violence situation at the park earlier in the day. SENT: 170 words.

IOWA STATE BOATING ACCIDENT — One Iowa State University student died and another was missing after members of the school’s crew club had an accident on a lake north of Ames. SENT: 160 words.

DALLAS OFFICER-MISTAKEN APARTMENT-STREET — Officials have renamed a portion of a Dallas street for Botham Jean, an unarmed Black man who was fatally shot in his apartment by a white former police officer who mistook his apartment for her own. SENT: 320 words, photos.

EGYPT-BUILDING COLLAPSE — Search and rescue workers pulled a 6-month-old baby alive from the rubble of a collapsed building in Cairo as the death toll rose to 25, Egyptian officials say. SENT: 210 words, photos.

INDONESIA-REFINERY FIRE — At least 500 people were being evacuated from a nearby village after a massive fire broke out at the Pertamina Balongan Refinery in Indonesia’s West Java province. SENT: 150 words, photos.

SWITZERLAND-CREDIT SUISSE — Swiss bank Credit Suisse says it may face a “highly significant” loss resulting from a default by a U.S.-based hedge fund on margin calls that it and other banks made last week. SENT: 190 words.

VIRUS-OUTBREAK — A year after becoming a global epicenter of the coronavirus pandemic, New York and New Jersey are back atop the list of U.S. states with the highest rates of infection. SENT: 850 words, photos. With VIRUS-OUTBREAK-THE LATEST (sent)

VIRUS OUTBREAK-GERMANY — German Chancellor Angela Merkel has blamed her country’s difficulties during the coronavirus pandemic on “a tendency toward perfectionism.” In a lengthy television interview late Sunday she called for greater flexibility to tackle the latest surge in cases. Merkel acknowledged on public broadcaster ARD that mistakes were made by her government, including on plans for an Easter lockdown. SENT: 390 words, photos.

AUSTRALIA POLITICS — Australia’s leader has reassigned some key members of his Cabinet and launched a new taskforce as he tries to address a series of sexual misconduct scandals that have rocked his government. SENT: 360 words, photos.

NKOREA MISSILES — North Korea has accused the United Nations of a “double standard” over its reaction to the North’s missile launches, warning it of a serious consequence. SENT: 340 words, photo.

CONVIENCE STORE SHOOTING — Police say a man accused of shooting three people at a Maryland convenience store also fatally shot his parents and set his apartment on fire before he shot and killed himself. SENT: 360 words, photos.

MASSAGE BUSINESS SHOOTINGS-LAWMAKERS — Members of Congress laid flowers at the three massage businesses in Georgia where a gunman killed eight people, six of them women of Asian descent. The congressional delegation that visited the sites on Sunday included members of the Asian Pacific American Caucus. SENT: 620 words, photos.

HELICOPTER CRASH-ALASKA The names of the five people who were killed in a helicopter crash this weekend in Alaska have been released. Alaska State Troopers say among the dead was a Colorado man, two from the Czech Republic and two Alaskans, including the pilot. SENT: 600 words.

CHINA-SEMICONDUCTORS — China has announced tax breaks to spur growth of its semiconductor industry following U.S. sanctions that cut off access to American processor chips for tech giant Huawei and some other companies. Communist leaders declared accelerating efforts to transform China into a self-reliant “technology power” this year’s top economic priority after the tariff war with Washington highlighted its reliance on U.S. components for smartphones and other tech industries Beijing wants to develop. SENT: 340 words, photos.

BKC--NCAA-CREIGHTON-GONZAGA — Top-seeded Gonzaga did against Creighton what it’s done throughout this unblemished season. Drew Timme scored 22 points and the top-seeded Bulldogs rolled past the fifth-seeded Bluejays with versatile offense and efficient defense to win 83-65 in the Sweet 16 of the NCAA Tournament. SENT: 740 words, photos. With BKC--NCAA-Oregon-USC — USC shuts down Oregon 82-68 to end 20-year Elite Eight wait. SENT: 870 words, photos.

BKW--NCAA-GEORGIA TECH-SOUTH CAROLINA — Zia Cooke scored 17 points to lead top-seed South Carolina to a 76-65 win over fifth-seeded Georgia Tech and reach the Elite Eight. SENT: 950 words, photos. With BKW--NCAA-Texas-Maryland — Charli Collier scored 16 points and grabbed 11 rebounds as No. 6 Texas shut down No. 2 Maryland’s high-powered offense for a 64-61 win that sent the Longhorns to the Elite Eight as the lowest seed still alive in the women’s NCAA Tournament. SENT: 810 words, photos.