Jordan Spieth tapped in for bogey to win the Masters, bent over briefly and then straightened with a smile. That was his favorite image from his 2015 victory.

The best photograph? That was one he never would have seen coming.

Spieth figures it was no more than two hours after he made his final putt, right before he joined the Augusta National members for a Sunday night dinner, that the club presented him a picture frame with a collection of photos that he had never seen, mainly because he was busy putting. 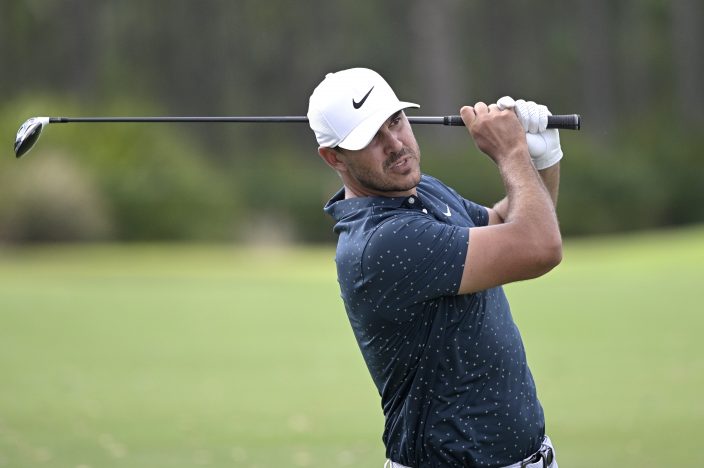 Brooks Koepka hits from the seventh fairway during the final round of the Workday Championship golf tournament Sunday, Feb. 28, 2021, in Bradenton, Fla. (AP PhotoPhelan M. Ebenhack)

“They already had all these different pictures put together in one frame — you, your caddie's reaction and all the family you had there. My parents. Annie (now his wife)."

It also had photos of his brother, Steven, and his grandfather, both on the grounds when he won. The club even managed to get a photo of his sister, Ellie, who was watching from home in Dallas.

“Everyone who was with you, all capturing the moment,” Spieth said. 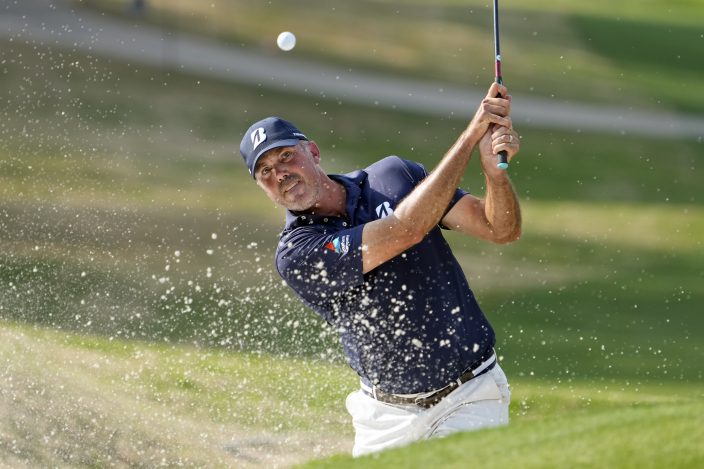 Matt Kuchar hits out of the sand on the 16th hole during a round of eight match at the Dell Technologies Match Play Championship golf tournament Saturday, March 27, 2021, in Austin, Texas. (AP PhotoDavid J. Phillip)

Even in a day when photos are more readily available, this is no small task to have it ready to present to the Masters champion before winning has even sunk in. There's a lot of traditions unlike others. This one doesn't get much attention.

But it sure got Patrick Reed's attention.

Reed, who won in 2018, says he doesn't keep a lot of golf photos in his office or around the house in Houston. But this one he has in a closet as he tries to find the right place for it.

“It's awesome,” Reed said. “How fast they get it turned around is a joke.”

His victory came down to the final putt, a short par for a one-shot victory over Rickie Fowler.

“It was literally ... I signed my card, the ceremony (on the 18th green), straight to media and then we came back to Butler Cabin as they're getting the members together for dinner,” Reed said. “It was already sitting there. Some of the photos are when you make the last putt. There's one of hugging (wife) Justine.

“To have all that together, it's just awesome.”

KOEPKA ON THE MEND

Four-time major champion Brooks Koepka said he is “busy as hell” trying to recover from surgery on his right knee. The question is whether he can return in time for the Masters.

Koepka, whose career has been slowed by injuries to his ankle (2016), wrist (2018) and left knee (2020), dislocated his right knee cap and had ligament damage during a fall. He had surgery on March 16.

“Progressing nicely and happy how it's going,” Koepka said in a text message Tuesday.

Koepka already has missed three majors over the last five years, including the Masters in 2018 while recovering from the wrist injury. He had to miss the U.S. Open — he was coming off back-to-back wins and a runner-up finish in his previous three appearances — while letting his left leg heal.

There is no deadline for committing to play in the Masters, which starts April 8.

ALL WET AND STILL AWAY

Matt Kuchar won the holes and still wasn't sure what to make of the peculiar rule that came into play during his semifinal loss to Scottie Scheffler at the Dell Technologies Match Play.

On the par-5 12th, Kuchar hit his second shot to the front of the green about 90 feet away from the hole. Scheffler hit into the water and had to drop just over 100 yards away.

According to Rule 6.4a(1), it was Kuchar's turn to play because Scheffler's shot was about 60 feet away — never mind that it was at the bottom of the river, it technically was closer to the hole. Kuchar rolled his putt up to 3 feet, Scheffler hit wedge to 40 feet for his fourth shot and Kuchar won the hole.

On the par-4 13th, Scheffler tried to drive the green and came up a yard short into water. Kuchar was well right into the mounds but pin-high. Scheffler was standing some 200 yards back (from where the ball last crossed water), waiting on Kuchar to chip.

“It was kind of a head-scratcher,” Kuchar said Tuesday. “I get it how it works, but I don’t understand it and I probably don’t quite agree with it, either. I just can’t figure out a situation where it truly makes sense. When a ball is completely unplayable, I don’t understand why the ‘away’ process changes in that situation, when somebody has to clearly take a drop somewhere further away.”

Scheffler went on to beat him and advance to the finals, where he lost to Billy Horschel. Kuchar won his consolation match.

British Amateur champion Joe Long and Angus Flanagan were among 10 players chosen for the Great Britain & Ireland team that will play U.S. amateurs in the Walker Cup at Seminole next month.

Long won the British Amateur last summer and will play in the Masters next week. Flanagan plays college golf at Minnesota and last month won the Collegiate Showcase at Riviera to earn a spot in the field at the Genesis Invitational.

The other GB&I players named to the team are Barclay Brown, Alex Fitzpatrick, Ben Jones, Matty Lamb, John Murphy, Mark Power, Ben Schmidt and Sandy Scott. The team has seven players from England, two from Ireland and one from Scotland.

The Americans, who named their team earlier, have won the last two times at Royal Liverpool in 2019 and Los Angeles Country Club in 2017.

The LPGA Tour returns to Oahu two weeks after its first major, but not to the same golf course.

The Lotte Championship is moving this year from Ko Olina to Kapolei Golf Club for its ninth edition. What hasn’t changed is the tournament will start on Wednesday and end on Saturday. The LPGA then leaves Hawaii for Los Angeles before embarking on a three-week swing through Asia.

Kapolei previously hosted the Ladies Hawaiian Open from 1996 to 2001. Most recently, it hosted the Pacific Links Championship on the PGA Tour Champions from 2012-14.

Last year’s tournament was canceled because of the COVID-19 pandemic. It will not have spectators at Kapolei.

Billy Horschel had earned $1,538,772 in 12 tournaments this season on the PGA Tour. He made $1.82 million for winning the Dell Technologies Match Play. ... The Travelers Championship has extended its title sponsorship through 2030. Travelers Companies has been part of the tournament since it began in Hartford, Connecticut, in 1952 and has been title sponsor since 2007. It typically is the week after the U.S. Open. ... Comcast Business has taken over sponsorship of the program that doles out $10 million in bonus money to the PGA Tour players who finish in the top 10 in the FedEx Cup after the regular season. The No. 1 player in the standings gets $2 million, while 10th place pays $500,000. ... Americans now have won 10 of the last 11 times in the World Golf Championships. ... The Austrian Golf Open returns to the European Tour schedule and will be played the week after the Masters. The event was the first to be held last year when the tour returned following the pandemic-caused shutdown.

Lexi Thompson has finished second, third, fourth and fifth (not in that order) in her last five appearances at the ANA Inspiration and is a combined 49-under par.

“My son told his teacher his mom has two jobs and his dad has zero, so it will be cool for him to watch me. Hopefully, I can make the cut. He’ll think I actually have a job this week.” — J.J. Killeen, who won a 2-for-1 playoff Monday to qualify for the Valero Texas Open.