Allies of a Democratic lawmaker arrested last week during a protest of Georgia's new Republican-backed election law are strongly pushing back on a police report that compares the lawmaker knocking on the door of the governor's office to the violent storming of the U.S. Capitol by a pro-Trump mob in January.

Democratic Rep. Park Cannon was arrested Thursday after she said she wanted to see GOP Gov. Brian Kemp sign the legislation, which adds new restrictions on mail voting, into law. Cannon was charged with obstruction of law enforcement and disruption of the General Assembly and was released from jail later that evening.

Lt. G.D. Langford said in an incident report that Cannon was knocking on the door of the governor’s office and would not stop when approach by troopers. 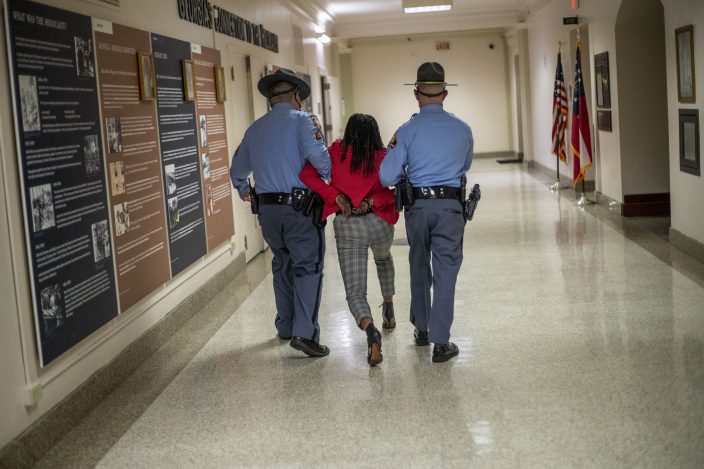 Rep. Park Cannon (D-Atlanta) is escorted out of the Georgia Capitol by Georgia state troopers after being asked to stop knocking on a door that lead to Gov. Brian Kemp’s office while Kemp was speaking after signing a sweeping overhaul of state elections behind closed doors in Atlanta, Thursday, March 25, 2021. An attorney for Cannon says it’s “law enforcement overreach” to charge the Georgia House member with two felonies. (Alyssa PointerAtlanta Journal-Constitution via AP)

“I felt that if I did not take action, the other protesters would have been emboldened to commit similar acts,” the incident report says. “The events of January 6, 2021, at the U.S. Capitol were in the back of my mind. I didn’t want the protesters to attempt to gain entry into a secure part of the Capitol.”

Other Democratic lawmakers say that comparison is a stretch.

“They weren’t threatened by a possible insurrection of someone smaller than me with no weapons and no raised voice,” tweeted Rep. Dar’shun Kendrick. “They were threatened by a black woman. Period. Full stop.” 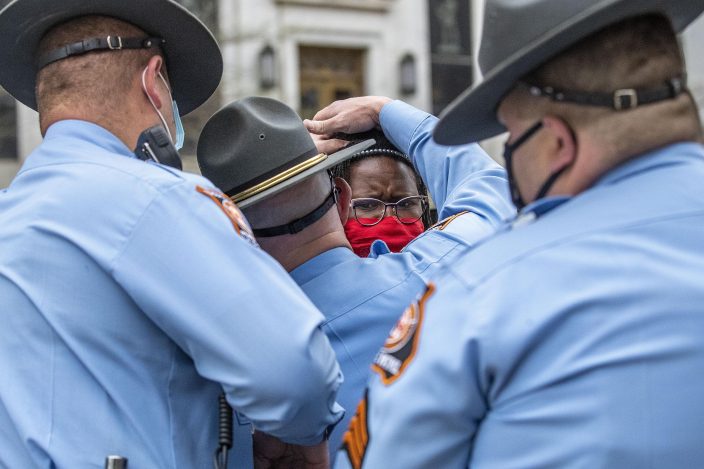 State Rep. Park Cannon, D-Atlanta, is placed into the back of a Georgia State Capitol patrol car after being arrested by Georgia State Troopers at the Georgia State Capitol Building in Atlanta, Thursday, March 25, 2021. Cannon was arrested by Capitol police after she attempted to knock on the door of the Gov. Brian Kemp office during his remarks after he signed into law a sweeping Republican-sponsored overhaul of state elections that includes new restrictions on voting by mail and greater legislative control over how elections are run. (Alyssa PointerAtlanta Journal-Constitution via AP)

Gerald Griggs, an attorney representing Cannon, said “it’s unfortunate that that phraseology was used by the Capitol police.”

“My review of the evidence, witnesses and video, even though it’s preliminary, is that many of the facts as laid out in that police report are inconsistent with the actual facts of what happened,” Griggs said.

A federal lawsuit filed Monday — the third challenging the new law since it was signed last week — challenges multiple aspects of the law. Those include the ban on providing food and drink to people waiting in line to vote, new identification requirements for requesting and casting an absentee ballot and a reduction in early voting days for runoff elections, among others. 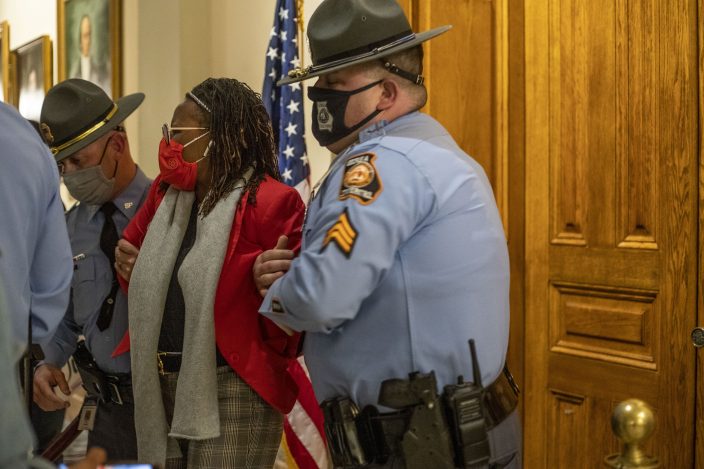 Rep. Park Cannon (D-Atlanta) is placed in handcuffs by Georgia State Troopers after being asked to stop knocking on a door that lead to Gov. Brian Kemp's office while Gov. Kemp was signing SB 202 behind closed doors at the Georgia State Capitol Building in Atlanta, Thursday, March 25, 2021. (Alyssa PointerAtlanta Journal-Constitution via AP)

“This law is voter suppression plain and simple,” Sophia Lakin, deputy director of the ACLU’s Voting Rights Project, said during a video news conference. She said the law is aimed at making it harder for historically disenfranchised minority communities to have a voice in democracy.

“It’s an absolutely shameful response to the historic participation by these communities in the last election cycle,” she said.