Many of the over 120,000 excess deaths Mexico suffered so far during the pandemic may have been indirectly caused by the coronavirus, even if those people didn’t die of COVID-19, Mexican officials said Tuesday.

A “very significant part” of those deaths were people who were suffering heart problems but were too afraid to go the hospital for fear of getting infected, said Dr. Ruy López Ridaura, the country’s director of disease prevention and control. 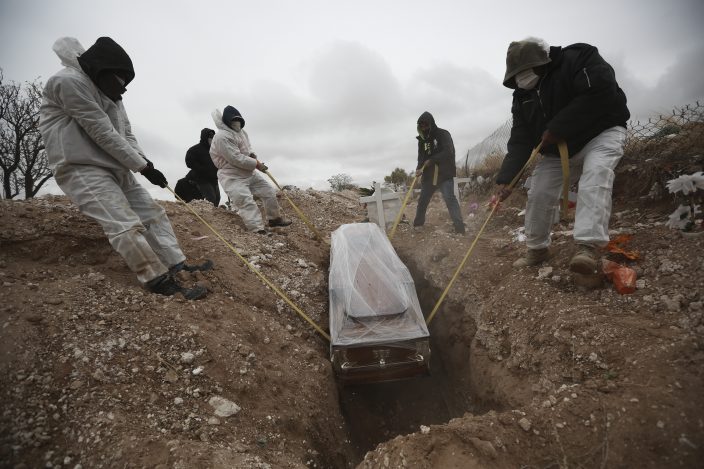 FILE - In this Oct. 27, 2020 file photo, workers wearing full protection gear amid the new coronavirus pandemic, lower a coffin into a grave in an area of the San Rafael municipal cemetery set apart for people who have died from COVID-19, in Ciudad Juarez, Mexico. As Mexico approaches 200,000 in officially test-confirmed deaths from COVID-19, the real death toll is probably higher due to the country’s extremely low rate of testing. (AP PhotoChristian Chavez, File)

“It is not unreasonable to think that a very significant part is due to people not seeking medical attention,” he said. “They were in a certain way afraid to go to a system that was caring for a lot of COVID patients, for fear of getting infected.”

The number of deaths from heart disease and diabetes skyrocketed during 2020. For example, deaths from cardiac ailments increased 36% last year, as compared to 2019, and deaths from complications of diabetes were up 46%.

Fear may not have been the only factor. Many hospitals in Mexico simply did not have room for non-COVID-19 patients, or treatment may have been delayed because ambulances were tied up during the pandemic, or because some hospitals would not treat emergency patients until they had been tested for the coronavirus.

FILE - In this June 24, 2020 file photo, crematorium workers burn the coffins that contained the remains of people who died from the coronavirus after their cremation at the San Nicolas Tolentino cemetery in the Iztapalapa neighborhood of Mexico City. As Mexico approaches 200,000 in officially test-confirmed deaths from COVID-19, the real death toll is probably higher due to the country’s extremely low rate of testing. (AP PhotoMarco Ugarte, File)

Not including the indirect deaths, officials list 322,263 deaths directly caused by COVID-19.

Mexico's toll rivals that of Brazil, which currently has the world’s second-highest number of deaths after the United States. But Mexico’s population of 126 million is considerably less than either of those countries.