BIDEN-INFRASTRUCTURE — President Joe Biden wants $2 trillion to re-engineer America’s infrastructure and he expects the nation’s corporations to pay for it. The president travels to Pittsburgh to unveil what would be a hard-hatted transformation of the U.S. economy. By Josh Boak and Lisa Mascaro. UPCOMING: 870 words, photos by 5:30 a.m. Speech at 4:20 p.m. FILE - In this Jan. 27, 2021, file image from video, Jeff Zients, White House coronavirus response coordinator, speaks as Dr. Anthony Fauci, director of the National Institute of Allergy and Infectious Diseases and chief medical adviser to the president., Dr. Marcella Nunez-Smith, chair of the COVID-19 health equity task force, Dr. Rochelle Walensky, director of the Centers for Disease Control and Prevention, and Andy Slavitt, senior adviser to the White House COVID-19 Response Team,, appear on screen during a White House briefing on the Biden administration's response to the COVID-19 pandemic in Washington. (White House via AP, File)

CAPITOL BREACH-REGRETS — Dozens of people arrested in the siege at the U.S. Capitol have apologized and expressed regret as the consequences of their actions sink in. The ramifications include potential job losses, financial ruin, time behind bars and ignominy beyond their lifetimes as images from the riot make their way into history books. By Jacques Billeaud and Michael Tarm. UPCOMING: 1,200 words, photos by 6:30 a.m.

IRAQ-IRAN’S FIGHTERS — Iran-aligned Shiite militias are posing an increasing challenge for Iraq ahead of key talks with Washington that are meant to shape the future of the U.S.-Iraq relationship. That challenge was on full display during a military-style parade held by Iran-affiliated fighters in Baghdad last week. It underscored the increasing threat to Iraq’s stability from rogue militias loyal to Tehran. By Qassim Abdul-Zahra and Zeina Karam. SENT: 950 words, photos.

GEORGE-FLOYD-OFFICER-TRIAL — A Minneapolis firefighter who voiced frustration at being prevented from using her EMT training to help George Floyd will be back on the stand in the trial of the fired police officer charged in Floyd’s death. By Steve Karnowski and Amy Forliti. SENT: 920 words, photos, video. 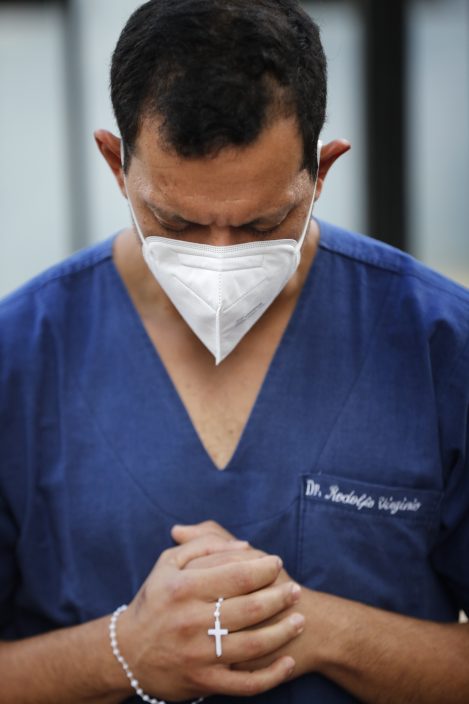 Doctor Rodolfo Virginio prays during a Mass in front of the COVID-19 wing of the National Institute of Respiratory and Environmental Diseases in Asuncion, Paraguay, Tuesday, March 39, 2021. As deaths daily average increases during Holy Week, the government has decreed a lockdown to curb the spread of COVID-19. (AP PhotoJorge Saenz)

ASIAN-AMERICAN-WOMAN-ASSAULTED — Authorities searching for a man who viciously attacked an Asian American woman near New York City’s Times Square are asking the public for help — not only in locating the suspect, but also in doing its part to disrupt further assaults. By Michael R. Sisak. SENT: 690 words, photos, videos.

LONDON-BEYOND-THE-PANDEMIC-TOURISM — The pandemic has dealt a blow to London’s tourism industry, which employs one in seven of the capital’s workers. Even top attractions like the Tower of London have struggled as COVID-19 curtailed international tourism. After enduring three national lockdowns, attractions and hospitality businesses in London are making tentative plans to reopen from mid-May. But deep uncertainty about the coronavirus remains. By Sylvia Hui. SENT: 1,060 words, photos.

VIRUS-OUTBREAK-MEXICO — Many of the over 120,000 excess deaths Mexico suffered so far during the pandemic may have been indirectly caused by the coronavirus, even if those people didn’t die of COVID-19, Mexican officials say. With VIRUS-OUTBREAK-THE-LATEST.

SUPREME COURT-NCAA — With the March Madness basketball tournament ongoing, the Supreme Court will hear arguments in a case about how colleges can reward athletes who play Division I basketball and football. SENT: 420 words, photos. UPCOMING: 700 words after 10 a.m. arguments.

OBIT-LIDDY — G. Gordon Liddy, a mastermind of the Watergate burglary and a radio talk show host after emerging from prison, has died at age 90. SENT: 940 words, photos.

GAETZ-INVESTIGATION — Republican Rep. Matt Gaetz, a prominent conservative in Congress and a close ally of former President Donald Trump, says he is being investigated by the Justice Department over a former relationship but denied any criminal wrongdoing. SENT: 560 words, photo.

MEXICO-POLICE-DEATH — A Salvadoran woman who died in police custody over the weekend in a Caribbean beach resort had also suffered abuse by her companion, who has been arrested, Mexican authorities say. SENT: 490 words, photos.

INDONESIA-PLANE CRASH — Indonesia’s transport minister says navy divers have recovered the cockpit voice recorder of a Sriwijaya Air jet that crashed into the Java Sea in January with 62 people on board. SENT: 630 words, photos.

AUSTRALIA-GUIDED MISSILES — Australia announced it would begin building its own guided missiles in close collaboration with the U.S. as it seeks to boost its defense capabilities. SENT: 510 words, photo.

CALIFORNIA-HIGHWAY-CRASH — A Mexican man was charged with coordinating a smuggling effort that left 13 people dead when their overloaded SUV was struck by a big-rig after crossing the border into California. SENT: 580 words, photos.

FINANCIAL MARKETS — Asian shares were mostly lower despite data that pointed to a strong economic recovery in China, as worries lingered about the pandemic. By Business Writer Yuri Kageyama. SENT: 590 words, photos.

ON FOOTBALL-17 GAMES — There was never any doubt the NFL would grow its regular-season schedule to 17 games once the labor agreement with the players union was reached a year ago. By Pro Football Writer Barry Wilner. SENT: 700 words, photos.

NCAA-COVID MONOTONY BREAKS — Being in quasi-isolation with any movement inside and outside their hotels restricted, players at the NCAA tournaments had to get creative during the days and weeks between games and nasal swabs to find ways to stay entertained. By Sports Writer Jim Vertuno. SENT: 970 words, photos.

MEDIA-VOLKSWAGEN-HOAX — Journalists are used to being wary about odd pranksters pulling April Fool’s Day hoaxes at this time of year. Few expect it from a multi-billion dollar corporation. By Media Writer David Bauder. SENT: 670 words, photo.