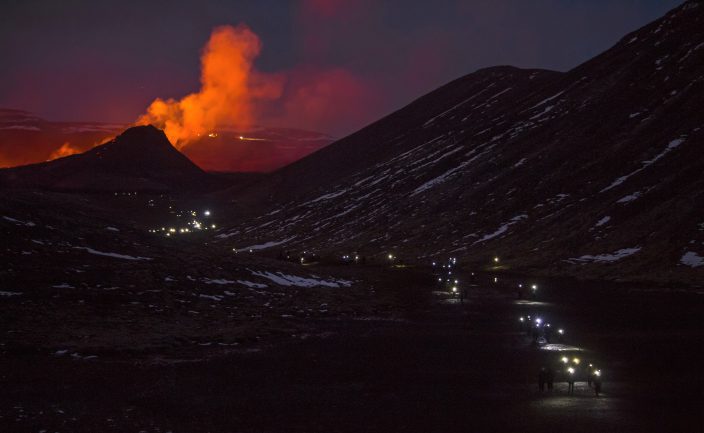 People use flashlights as they take the pathway down after watching the Lava flows from an eruption of a volcano on the Reykjanes Peninsula in southwestern Iceland on Wednesday, March 31, 2021. Iceland's latest volcano eruption is still attracting crowds of people hoping to get close to the gentle lava flows. (AP PhotoMarco Di Marco)

VIRUS OUTBREAK-J&J SUPPLIER — The company at the center of quality problems that led Johnson & Johnson to discard an unknown amount of its coronavirus vaccine has a string of citations from U.S. health officials for quality control problems. Emergent BioSolutons has been cited repeatedly by the Food and Drug Administration. By Richard Lardner and Linda Johnson. SENT: 950 words, photo. 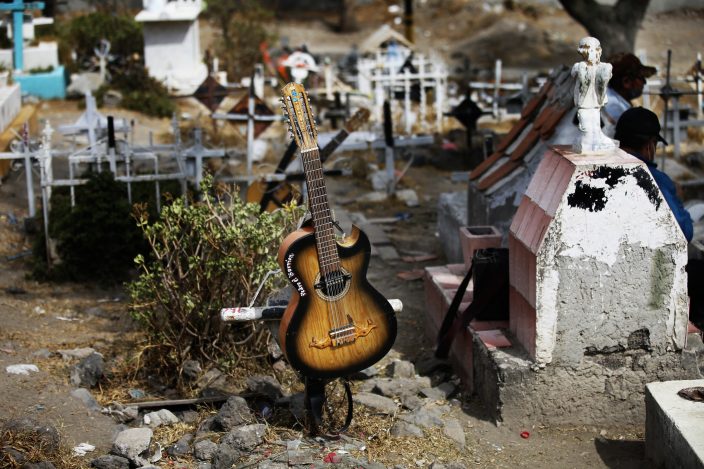 A musician’s guitar hangs from a cross on a grave at the Valle de Chalco cemetery, amid the new coronavirus pandemic on the outskirts of Mexico City, Wednesday, March 31, 2021. The musician was waiting for clients to come and give their last respects to their loved ones with one final serenade. (AP PhotoMarco Ugarte)

VIRUS OUTBREAK — France is now Europe’s latest coronavirus danger zone, but President Emmanuel Macron is resisting calls for dramatic action. He decided to stick to a strategy that aims to offer a “third way” between freedom and lockdown. It is meant to keep both infections and a restless populace under control until mass vaccinations take over. The government refuses to acknowledge failure, and it blames delayed vaccine deliveries and a disobedient public for soaring infections and saturated hospitals. Macron’s critics blame arrogance at the highest levels. By Angela Charlton. SENT: 940 words, photos.

BIDEN-INFRASTRUCTURE-ANALYSIS — Infrastructure was a road to nowhere for former Presidents Donald Trump and Barack Obama. But Joe Biden believes he can use it to drive America to the future after a dozen years of false starts. The trip is unlikely to be smooth. By Josh Boak. SENT: 960 words, photos. With BIDEN-INFRASTRUCTURE-CONGRESS — Democrats aim for July vote as Congress digs in on infrastructure; BIDEN-INFRASTRUCTURE-GLANCE. Also see BIDEN-ABANDONED WELLS below.

IMMIGRATION-BORDER-RELEASES — Overwhelmed and underprepared, U.S. authorities are releasing migrant families on the Mexican border without notices to appear in immigration court or sometimes without any paperwork at all — a time-saving move that has left migrants confused. By Elliot Spagat. SENT: 1,050 words, photos. 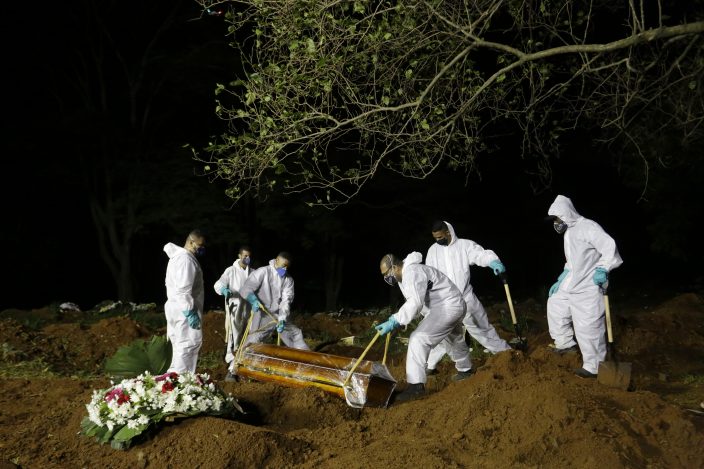 Cemetery workers lower the coffin of a COVID-19 victim into his grave at the Vila Formosa cemetery in Sao Paulo, Brazil, late Wednesday, March 31, 2021. Because of the increased number of deaths in the city, the burial service in some public cemeteries has been extended to the hours of the night. (AP PhotoNelson Antoine)

CALIFORNIA-OFFICE-SHOOTING — A child was among four people killed in a shooting at a Southern California office building that left a fifth victim and the gunman critically wounded, police say. The violence in the city of Orange southeast of Los Angeles was the nation’s third mass shooting in just over two weeks. By Stefanie Dazio and Robert Jablon. SENT: 460 words, photos.

SAME-SEX-MARRIAGE-20-YEARS — Twenty years ago, the mayor of Amsterdam married four couples in City Hall as the Netherlands became the first country with legalized same-sex marriages. Today, same-sex marriage is legal in 28 countries worldwide, including most of Western Europe. Yet its spread has been uneven. Taiwan is the only place in Asia to take the step; South Africa is the only African country to do so. Added together, the countries with same-sex marriage are home to about 1.2 billion people, roughly 15% of the world’s population. By David Crary and Mike Corder. SENT: 1,000 words, photos.

GAZA-HAMAS-FORCED-DIVORCE — After months of torture and interrogations in a Hamas prison, Palestinian activist Rami Aman says he was offered an unconventional proposition: Divorce your wife and you are free to go. By Fares Akram. SENT: 1,280 words, photos. An abridged version of 940 words is also available. 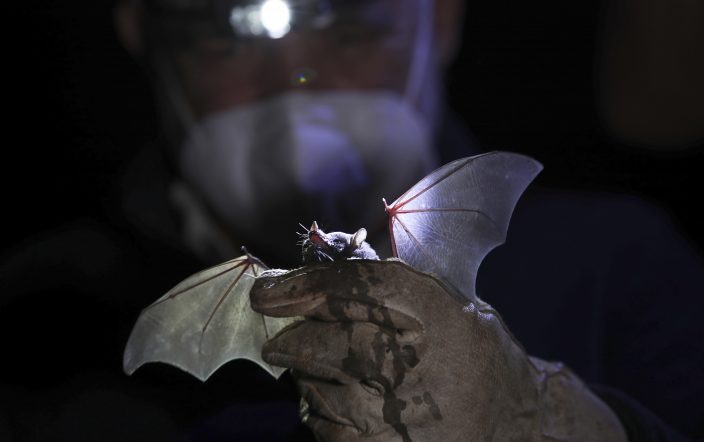 A Mexican long-tongued bat is held by Mexico's National Autonomous University, UNAM, Ecology Institute Biologist Rodrigo Medellin after it was briefly captured for a study at the university's botanical gardens, amid the new coronavirus pandemic in Mexico City, Tuesday, March 16, 2021. Listed as threatened in 1994, the bat normally lives in dry forests and deserts, in a range that extends from the southwestern United States to Central America. (AP PhotoMarco Ugarte) 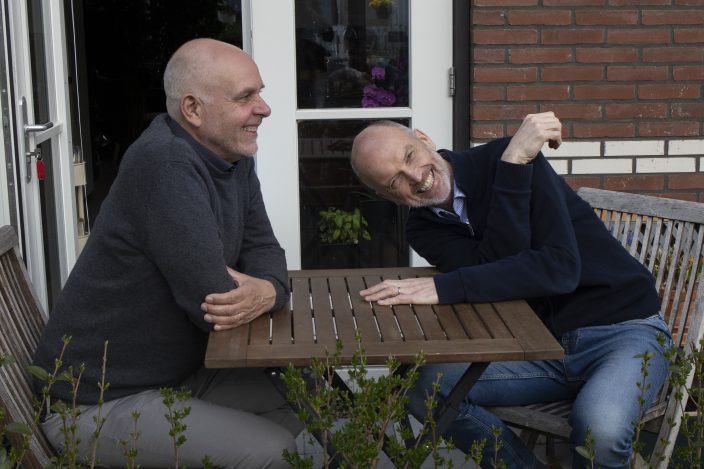 Gert Kasteel, left, and Dolf Pasker, right, one of the first four couples who tied the knot when same-sex marriage was legalized in the Netherlands, react during an interview at their home in Weesp, near Amsterdam, Netherlands, Wednesday, March 31, 2021. Twenty years ago, the mayor of Amsterdam married four couples in City Hall as the Netherlands became the first country in the world with legalized same-sex marriage. It's now legal in 28 countries, including most of Western Europe, as well as in the self-governing island of Taiwan. (AP PhotoPeter Dejong) 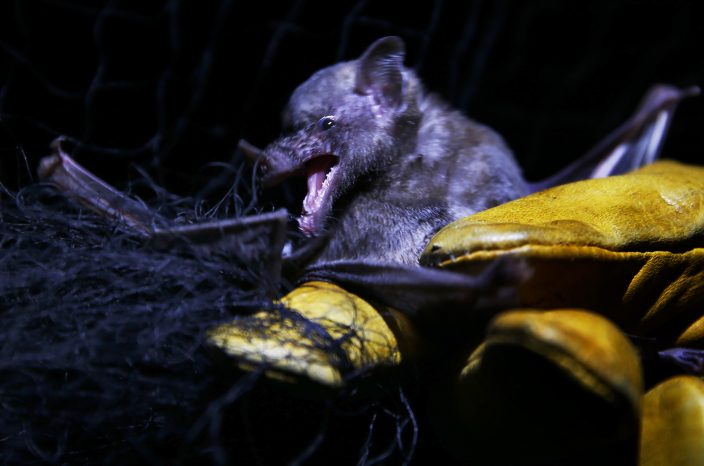 Mexico's National Autonomous University, UNAM, Ecology Institute student Fernando Gual retrieves a Mexican long-tongued bat from a net set up at the university's botanical gardens during a quick capture and release for a study in Mexico City, Tuesday, March 16, 2021. As people across the globe stay home to stop the spread of the coronavirus, animals have been venturing into places they aren’t usually seen, including the protected Mexican long-tongued bat in the Mexican capital. (AP PhotoMarco Ugarte)

VIRUS-OUTBREAK-INDIA — There isn’t any room at Sion Hospital in India’s megacity, Mumbai - approximately all 500 beds reserved for COVID-19 patients are occupied. SENT: 910 words, photos. With VIRUS-OUTBREAK-THE-LATEST.

VIRUS-OUTBREAK-JAPAN — Japan is set to designate Osaka and two other prefectures for new virus control steps as infections in those areas rise less than four months before the Tokyo Olympics. SENT: 330 words, photos. 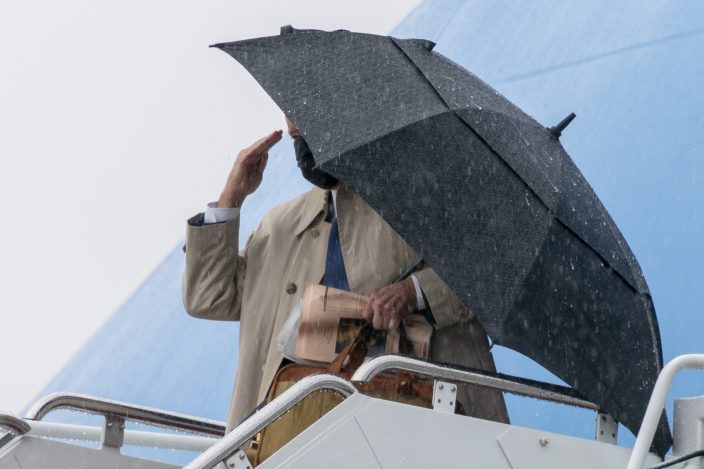 VIRUS-OUTBREAK-VIRAL QUESTIONS-VACCINE-INFECTION — Experts are still studying how good COVID-19 vaccines are at preventing people from spreading the virus, but say the risk is low. SENT: 310 words, graphic. 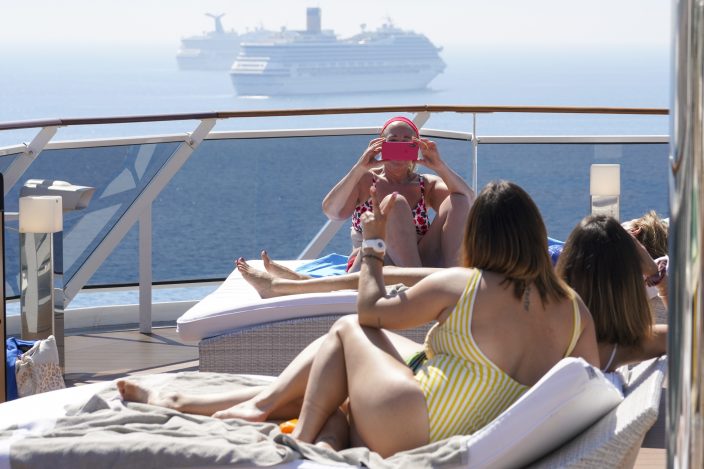 Passengers take selfies on a deck of the MSC Grandiosa cruise ship in Civitavecchia, near Rome, Wednesday, March 31, 2021. MSC Grandiosa, the world's only cruise ship to be operating at the moment, left from Genoa on March 30 and stopped in Civitavecchia near Rome to pick up more passengers and then sail toward Naples, Cagliari, and Malta to be back in Genoa on April 6. (AP PhotoAndrew Medichini)

BIDEN-CABINET — Biden plans to convene his first Cabinet meeting, but it will look very different, due to the pandemic. SENT: 790 words, photos. UPCOMING: 900 words after 1:15 p.m. meeting.

HONG KONG-POLITICS — Seven Hong Kong pro-democracy advocates were convicted on charges of organizing and participating in an unlawful assembly during massive anti-government protests in 2019 that triggered a crackdown on dissent. SENT: 460 words, photos.

GEORGE-FLOYD-OFFICER-TRIAL — George Floyd’s struggle with three police officers trying to arrest him, seen on body-camera video, included Floyd’s panicky cries of “I’m sorry, I’m sorry” and “I’m claustrophobic!” as the officers tried to push Floyd into the back of a police SUV. SENT: 720 words, photos, videos.

PIRATE-PLUNDER — A handful of coins unearthed from a pick-your-own-fruit orchard in rural Rhode Island and other random corners of New England may help solve one of the planet’s oldest cold cases. SENT: 960 words, photos.

MARIJUANA-NEW-MEXICO — New Mexico is joining a wave of states that are legalizing recreational marijuana as its Democrat-dominated Legislature sent a package of cannabis bills to a supportive governor. SENT: 760 words, photos.