LONDON — Britain’s government is planning to trial a coronavirus status certification plan over the coming months to allow the safe return of mass gatherings at places like sports grounds and nightclubs.

Officials are expected to consider passports that show whether a person has received a vaccine, has recently tested negative for the virus, or has immunity due to having tested positive in the previous six months.

The trial events will include soccer’s FA Cup semi-final and final, the World Snooker Championships, and a comedy club show. 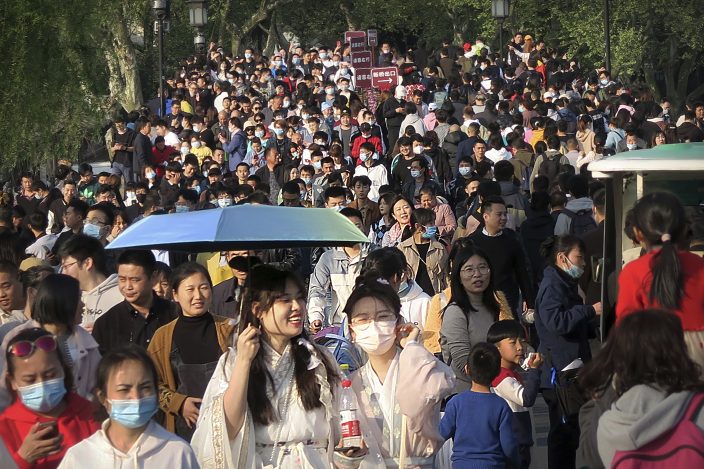 Visitors wearing face masks to protect against COVID-19 walk across a causeway at the West Lake in Hangzhou in eastern China's Zhejiang Province, Sunday, April 4, 2021. Domestic tourists were out in force at some of China's most popular tourist sites on a holiday weekend as the country continues to report few new cases of coronavirus within its borders. (AP PhotoMark Schiefelbein)

Prime Minister Boris Johnson is expected to set out more details on Monday. He said the trials will play an important role in allowing the “reopening of our country so people can return to the events, travel and other things they love as safely as possible.”

However, dozens of Johnson’s Conservative Party lawmakers have opposed the plans, and Johnson could struggle to get Parliament to approve the trials. 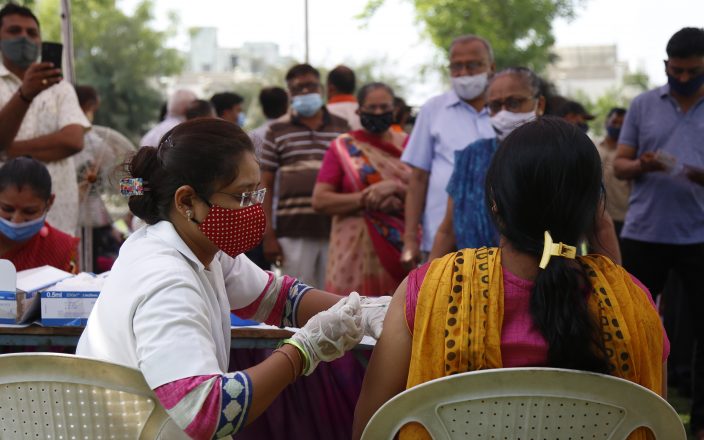 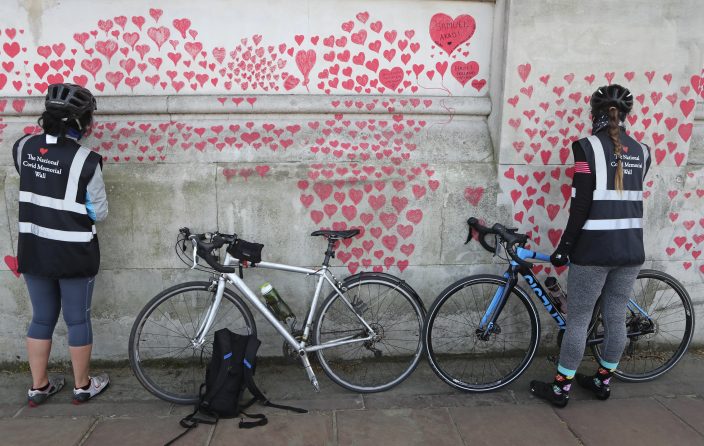 Women draw hearts on the 'The National COVID Memorial Wall' on the south bank of the Thames in front of St. Thomas' hospital and opposite the House of Parliament in London, Sunday April 4, 2021. Hearts are being drawn onto the wall in memory of the many thousands of people who have died in the UK from coronavirus, with organizers hoping to reach their target of 150,000 hearts by the middle of next week. (AP PhotoTony Hicks)

PARIS — Some 9,000 people are getting vaccinated at a huge stadium in Lyon during Easter weekend, and thousands more around France are spending the holiday lining up for injections elsewhere as the government tries to speed up vaccinations amid a new virus surge. 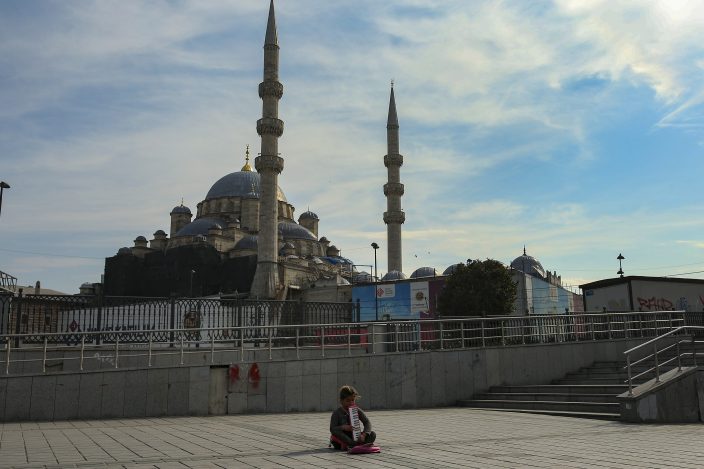 A child plays music for money backdropped by the Yeni Cami (New Mosque) in Istanbul, Saturday, April 3, 2021. The streets of Istanbul, reflect a weekend curfew resumed as the number of COVID-19 cases hit record levels, and with renewed restrictions announced for the Islamic month of Ramadan which begins on April 13. (AP PhotoEmrah Gurel)

But as France faced its second Easter in a row under the cloud of the pandemic, some cities pushed back against President Emmanuel Macron’s insistence that “there are no weekends or days off during vaccination.”

Authorities in Strasbourg on the German border shut down their vaccination facilities Friday through Monday, to allow workers “a little rest at last,” according to a city official. To ensure residents still had access to potentially life-saving vaccines, the city expanded vaccination hours during the week and injected all its weekly supply of doses between Monday and Thursday instead.

The city of Sarcelles north of Paris is among those staying open Sunday, amid mushrooming infections and demand. The surrounding Val d’Oise region now has the highest infection rate in France along with some of its poorest neighborhoods, and Sarcelles’ challenges symbolize inequalities worsened by the virus. 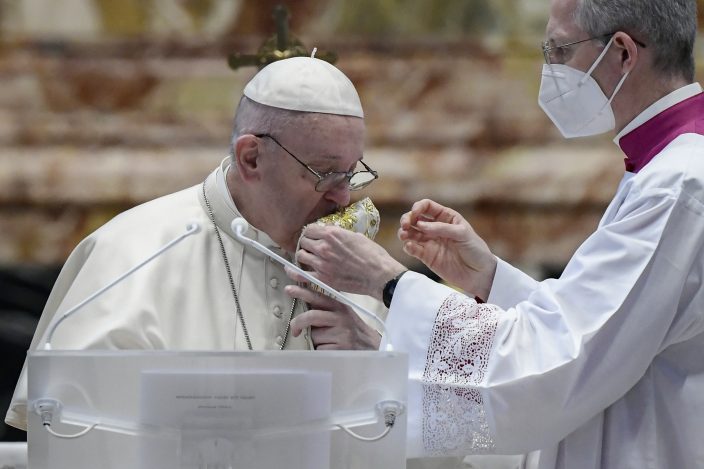 The Easter acceleration efforts stand in contrast to the beginning of France’s vaccine rollout in late December, when low staffing for the end-of-year holidays meant a slow start to injections, which initially focused on nursing homes.

France has reported one of the world’s highest virus death tolls, at 96,280 people, and the highest number of virus infections in Europe. 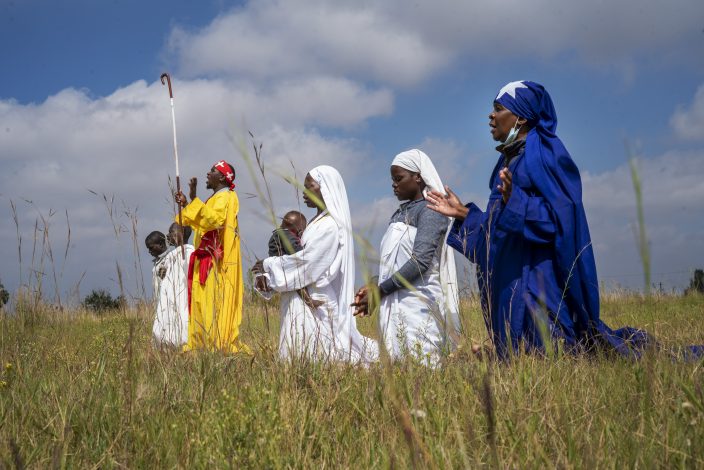 Yoido Full Gospel Church, the biggest protestant church in South Korea, allowed only about 2,000 church members to attend its Easter service, or about 17% of its main building's capacity. Masked church members sang hymns, clapped hands and prayed as the service was broadcast online and by Christian TV channels.

Seoul’s Myeongdong Catholic Cathedral, the biggest Catholic church in South Korea, limited Mass attendance to 20% of its capacity and livestreamed the service on YouTube.

Under current physical distancing rules, religious facilities in the greater Seoul area are allowed to have up to 20% of worshippers attend their regular services. Earlier Sunday, South Korea reported 543 new coronavirus cases, taking the country’s total to 105,279 with 1,744 deaths. 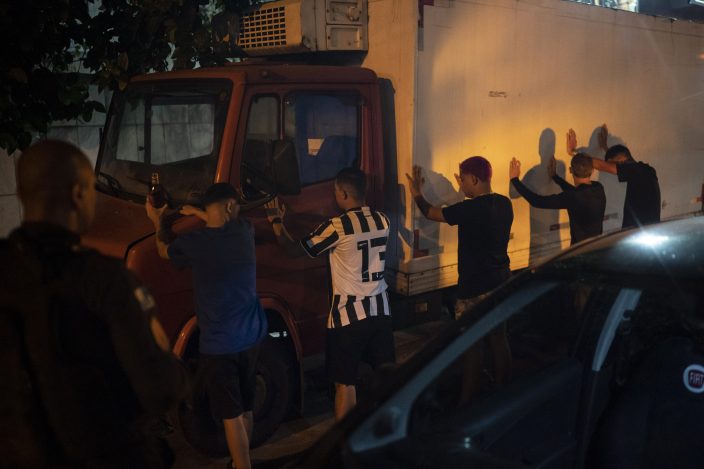 The pandemic totals on the tribe’s reservation that includes parts of Arizona, New Mexico and Utah increased to 30,164 cases and 1,257 deaths. 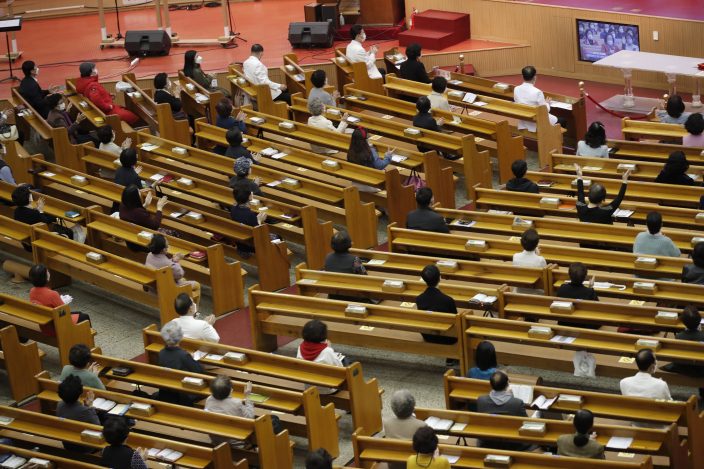 Christians wearing face masks as a precaution against the coronavirus attend while maintaining social distancing during an Easter service at the Yoido Full Gospel Church in Seoul, South Korea, Sunday, April 4, 2021. The church allowed only 20 percent members of the capacity to attend at the Easter service as a part of measure to prevent against the coronavirus. (AP PhotoLee Jin-man)

LAS VEGAS — Nevada regulators say casinos seeking the state’s OK to raise the current gambling floor occupancy limit above 50% must take steps to encourage their workers to be vaccinated against COVID-19.

The Gaming Control Board and Gaming Commission on Friday issued a memo with guidelines pushing casinos to provide paid time off for employees to be vaccinated, coordinate transportation to vaccine sites and make arrangements with pharmacy companies for vaccine distribution.

The state on March 15 increased maximum gambling floor occupancy to 50% of capacity, up from 25%, and the regulators have been authorized beginning May 1 to approve reopening plans with higher occupancy limits. 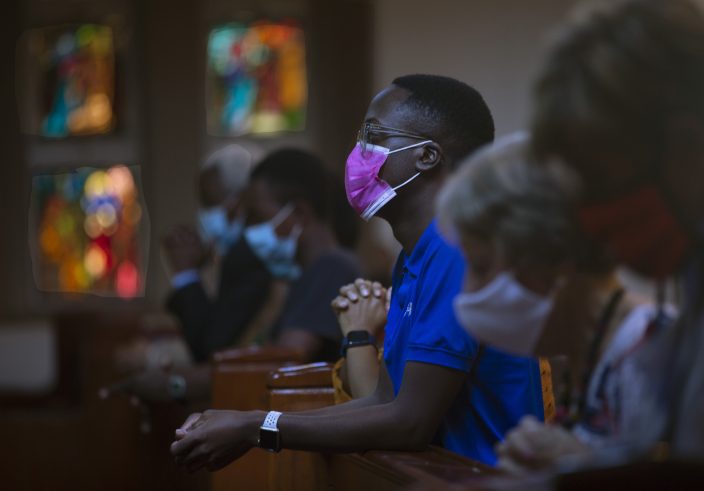 The memo said operators’ requests for higher capacity limits “will only be taken in cases where licensees have taken measurable and material steps” to vaccinate their workforce.

The memo said Nevada’s hospitality workforce has a “relatively low degree of vaccination penetration,” though some companies have begun taking steps to encourage employees to be vaccinated.

Effective Monday, Nevada will increase its age-based eligibility for vaccinations to all people age 16 and older. 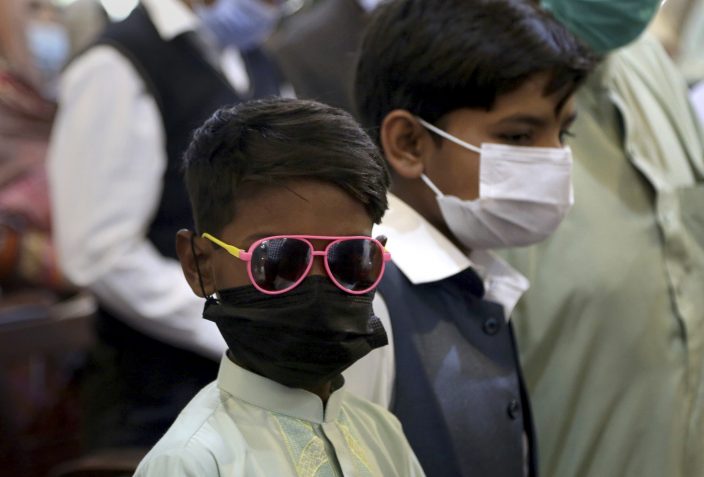 A Christian boy attends an Easter mass with others the a St. John's Cathedral, in Peshawar, Pakistan, Sunday, April 4, 2021. (AP PhotoMuhammad Sajjad)

AUSTIN, Texas — The Texas health department says it will receive another 2.5 million doses of the coronavirus vaccine next week.

The Texas Department of State Health Services says more than 1 million first doses will be sent to vaccination sites in 200 counties. About 900,000 first and second doses will go to pharmacies and to health and dialysis centers. The remaining doses are for people awaiting a second dose. All Texans 16 and older are now eligible to receive the vaccine.

The health department says the state has administered more than 11.8 million doses of the vaccine. The Center for Disease Control reports 27% of the state’s population has received at least one dose. That ranks ninth worst in the nation. Alabama has the lowest one-shot vaccination rate at 24.7% and New Mexico has the best at 39.5%.

BEIRUT — Syria’s government says that primary schools will close indefinitely next week amid a severe increase of coronavirus cases.

Universities will suspend classes for only two weeks and high schools will remain open. The announcement by government ministries on Saturday says closures will go into effect Monday. Final exams for grades five up to high school will be held over four days starting April 25.

Syria is experiencing a spike in coronavirus cases, with state media reporting last month the intensive care units in state hospitals in the capital of Damascus were full.

ISLAMABAD — Pakistan federal authorities will start coronavirus vaccinations for residents over 80 on Monday.

The country received 60,000 doses of the CanSino vaccine from China early in the week. Pakistan is already using the Sinopharm vaccine, donated by Beijing last month.

The National Command and Control Center says the vaccine administration will begin in all the four provinces for people over age 80.

Pakistan reported 4,723 new coronavirus cases and 84 confirmed deaths in the last 24 hours. The country is facing a virus surge, which the government says is worse than last year’s outbreak when a nationwide lockdown was imposed.

DHAKA, Bangladesh — Bangladesh authorities are imposing a one-week nationwide lockdown on Monday to curb the spread of the coronavirus.

Cabinet Minister Obaidul Quader announced the plan on Saturday. The government says 5,683 new infections and 58 deaths were recorded in the last 24 hours.

Forhad Hossain, the country’s junior minister for public administration, says organizations providing emergency services will be available during the lockdown. He says industries will remain open and employees must work in shifts, following health guidelines.

The government has already banned travel from all European countries, except the United Kingdom, and 12 other countries for three weeks.

Bangladesh has registered a total of 630,277 cases and 9,213 confirmed deaths. Health experts say the actual number is likely higher.