SEOUL, South Korea — Health officials in South Korea are considering measures to prevent a shortage in coronavirus vaccines and haven't specifically ruled out curbing exports of AstraZeneca shots produced in the country.

Concern has been growing about delayed shipments of vaccines as the United States, European countries and India take steps to strengthen control over vaccine exports to deal with shortages at home.

When asked about the possibility of South Korea restricting vaccine exports, Korea Disease Control and Prevention Agency official Jeong Yoo-jin said Tuesday she wasn’t yet able to comment on specific steps but added that officials were reviewing “as much possible measures” they could. 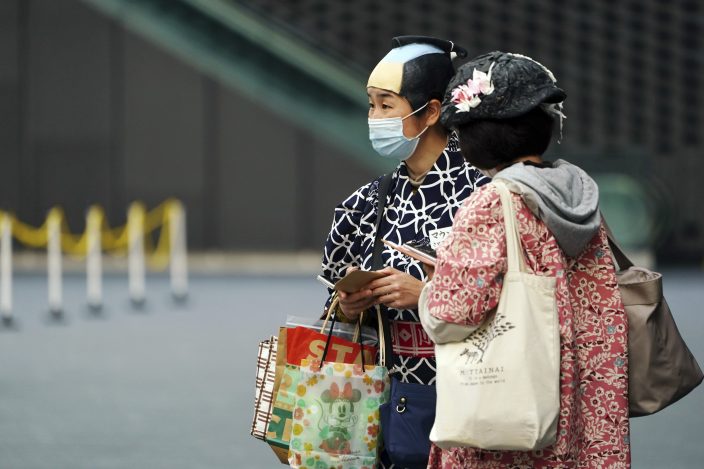 A person with a protective mask to help curb the spread of the coronavirus wears samurai wig Tuesday, April 6, 2021, in Tokyo. The Japanese capital confirmed more than 390 new coronavirus cases on Tuesday. (AP PhotoEugene Hoshiko)

Jeong’s tone seemed different from a briefing last week when she said clearly that officials weren’t considering restricting exports of the AstraZeneca shots manufactured by South Korea’s SK Bioscience. She then said such a move could trigger an international backlash that would potentially disrupt the country’s efforts to secure vaccines from different sources.

South Korea has wrestled with a slower rollout of vaccines than many other developed economies after officials insisted on a wait-and-see approach because its outbreak wasn’t as dire as in America and Europe. The country’s mass immunization program has so far been mainly reliant on locally produced AstraZeneca shots, although it did secure a smaller volume of Pfizer shots that are now being used for elders.

About a million South Koreans have received their first doses of vaccines as of Tuesday. Officials hope to vaccinate 70% of the country’s 51 million people before the start of the new influenza season around November. 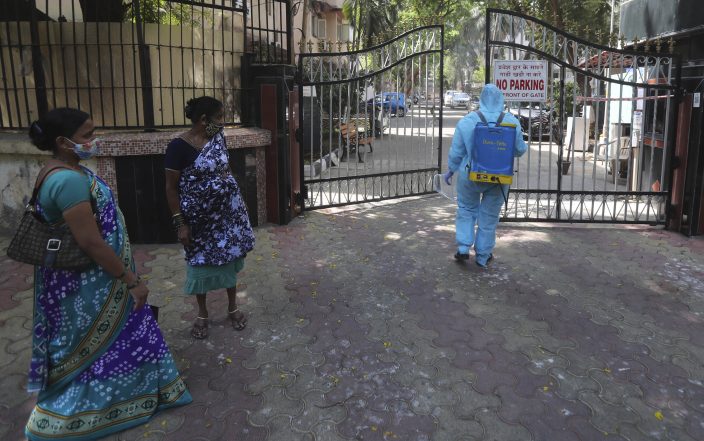 A civic worker sanitizes the gates of a residential building in Mumbai, India, Tuesday, April 6, 2021. India reported its biggest single-day spike in confirmed coronavirus cases since the pandemic began Monday, and officials in the hard-hit state home to Mumbai are resuming the closure of some businesses and places of worship in a bid to slow the spread. (AP PhotoRafiq Maqbool)

— European Union approved $4.7 billion in aid for Air France as it struggles through the economic impact of the pandemic

ISLAMABAD — Pakistan will start coronavirus vaccinations for foreign health workers and other foreigners, including Afghan refugees, who are older than 60 as COVID-19 deaths surge in this impoverished nation.

The government is not charging for the vaccinations, which were being given only to Pakistani health workers and older people. That left foreigners relying on vaccines imported by the private sector, which are expensive.

After four decades of war and conflict in neighboring Afghanistan, more than 1.5 million Afghans live as refugees in Pakistan.

The government notification said vaccinations of foreign health workers will be handled on parity with Pakistani health workers. Dr. Rana Mohammad Safdar, a senior health official, said Tuesday that instructions have been issued to relevant authorities in this regard.

On Tuesday, Pakistan reported 103 deaths from COVID-19, one of the highest single-day fatalities since January.

The government plans to inoculate 14 million people out of Sri Lanka's population of 22 million, and so far has approved the vaccines from Oxford-AstraZeneca, Sputnik V and China’s Sinopharm.

Cabinet ministers approved the health minister's proposal for the purchase, Cabinet spokesman Keheliya Rambukwella said Tuesday. It comes two weeks after the government said it would buy 7 million Sputnik V doses at a cost of $69.65 million.

Sri Lanka has vaccinated 903,000 people with the Oxford-AstraZeneca vaccine. It will use donated Sinopharm doses to inoculate Chinese workers in Sri Lanka but will not administer the vaccine to Sri Lankans without World Health Organization approval.

It has received 1,264,000 doses of the Oxford-AstraZeneca vaccine and has said it would buy another 13.5 million.

HELENA, Mont. — Montana Gov. Greg Gianforte has tested positive for COVID-19 a few days after receiving his first dose of a coronavirus vaccine.

Gianforte plans to isolate for 10 days on the advice of his doctor and public health guidance. He also has notified all of the people with whom he has had close contact. All of the governor’s in-person events have been canceled, and he plans to work from his home in Bozeman.

Gianforte received his first dose of a coronavirus vaccine Thursday.

On that date, venues will be permitted to have live audiences with strict capacity limits. Larger private gatherings indoors will be allowed, too.

More people will be allowed inside if they show proof of vaccination or a recent negative coronavirus test.

But some performance venues say the attendance caps won’t work for them financially.

The move comes as some states are seeing coronavirus infections surge. California Gov. Gavin Newsom’s administration believes it is safe to reopen since case rates are lower in California and vaccinations are increasing.

WASHINGTON — Secretary of State Antony Blinken has appointed a former diplomat and humanitarian aid chief to be a special envoy for U.S. coronavirus vaccine and prevention efforts.

Gayle Smith will be charged with overseeing U.S. programs to prevent, detect and respond to disease outbreaks, including COVID-19, abroad.

“She’s tested. She’s highly respected. She will hit the ground running,” Blinken said in announcing the appointment Monday. “And I can say from having worked with Gayle and admired her for years, that no one will work harder, faster, or more effectively to get us to the finish line.”

Smith is a former director of the U.S. Agency for International Development and has held senior State Department and National Security Council positions focused on Africa.

She was active in the Obama administration’s initiatives to eradicate the Ebola virus and was most recently the president of the ONE Campaign, the organization founded by U2 frontman Bono and others to combat extreme poverty and diseases like malaria, tuberculosis and HIV/AIDS.