Isolated North Korea has continued to claim a perfect record in keeping out the coronavirus in its latest report to the World Health Organization.

At the beginning of the pandemic more than a year ago, North Korea described its efforts to keep out the virus as a “matter of national existence.” It shut its borders, banned tourists and jetted out diplomats. It still severely limits cross-border traffic and has quarantined tens of thousands of people who have shown symptoms.

But it still says it has found no case of COVID-19, a widely doubted claim given its poor health infrastructure and a porous border with China, its economic lifeline. 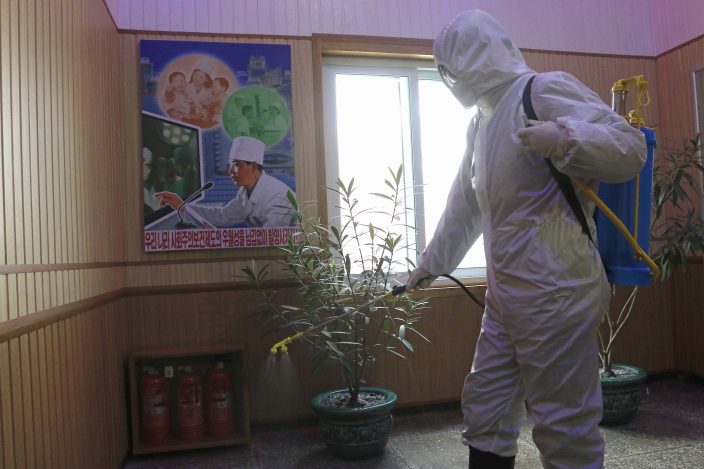 FILE - In this Feb. 5, 2021, file photo, an official of the Hygienic and Anti-epidemic Center in Phyongchon District disinfects the corridor of a building in Pyongyang, North Korea. Isolated North Korea has continued to claim a perfect record in keeping out the coronavirus in its latest report to the World Health Organization, on Wednesday, April 7, 2021. At the beginning of the pandemic more than a year ago, North Korea shut its borders and described its efforts to keep out the virus as a “matter of national existence.” It banned tourists, jetted out diplomats and still severely limits cross-border traffic while quarantining tens of thousands of people who have shown symptoms. (AP PhotoJon Chol Jin, File)

In an email to The Associated Press on Wednesday, Edwin Salvador, WHO’s representative to North Korea, said the North has reported it tested 23,121 people for the coronavirus from the beginning of the pandemic to April 1 and that all results were negative. Salvador said the North said 732 people were tested between March 26 and April 1.

WHO officials say the North is no longer providing the U.N. agency with the number of people it quarantines with suspected symptoms.

North Korea said Tuesday it would skip the Tokyo Olympics to protect athletes from the “world public health crisis caused by COVID-19.” 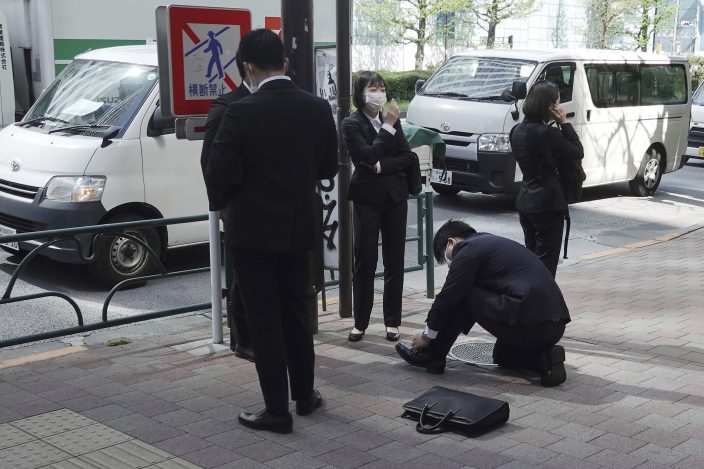 Employees wearing protective masks to help curb the spread of the coronavirus stand on a sidewalk Wednesday, April 7, 2021, in Tokyo. (AP PhotoEugene Hoshiko)

The U.N.-backed program to ship COVID-19 vaccines worldwide said in February that North Korea could receive 1.9 million vaccine doses in the first half of this year. However, COVAX has since warned of global shortages because the Serum Institute of India, which is licensed to produce the AstraZeneca vaccine, is putting its supplies into domestic demand while India's virus caseload is surging.

— South Korea has reported 668 new cases of the coronavirus, its highest daily jump in nearly three months, as concerns grow about another surge and a slow vaccine rollout. The numbers released by the Korea Disease Control and Prevention Agency on Wednesday brought the national caseload to 106,898, including 1,756 deaths. Most of the new cases were in the Seoul area and other major cities. Officials previously insisted a wait-and-see approach was feasible on South Korea's vaccine rollout because the nation's outbreak wasn’t as dire as those in America and Europe. Now, they say they are considering all possible measures to prevent a shortage, and it remains to be seen whether they would consider curbing exports of AstraZeneca shots produced by local firm SK Bioscience.

Australian Prime Minister Scott Morrison speaks to the media during a press conference at Parliament House in Canberra, Wednesday, March 17, 2021. Morrison said Australian government is ramping up its COVID-19 vaccination support for Papua New Guinea in a bid to contain a concerning wave of infections in a near-neighbor. (Lukas CochAAP Image via AP)

— Facing criticism for a vaccine rollout that’s behind schedule, Australia’s Prime Minister Scott Morrison notes his country has faced difficulty in getting promised vaccine doses from Europe. He said over 3 million of Australia’s contracted AstraZeneca vaccine doses haven’t yet arrived — but that shouldn’t be taken as him criticizing the European Union. “That’s just a simple fact. That’s not a dispute. It’s not a conflict. It’s not an argument. It’s not a clash. It’s just a simple fact. And I’m simply explaining to the Australian public that supply issues is what’s constraining and has constrained, particularly over these recent months, the overall rollout of the vaccine,” Morrison told reporters in Canberra. He said he will write again to the European Union and AstraZeneca requesting they send the full order of vaccine doses. Morrison said some of the doses will be sent to help its neighbor Papua New Guinea deal with its virus outbreak. In March, Europe stopped about 250,000 vaccines going to Australia due to concerns about European supply shortages.