German Chancellor Angela Merkel on Wednesday threw her weight behind a “short, uniform lockdown” as the country grapples with a high level of coronavirus cases fueled by the spread of a more contagious variant first detected in Britain.

German state governors, who are responsible for imposing and lifting virus restrictions, have taken differing approaches lately. Some have continued to back limited reopening steps while others advocate a stricter shutdown. 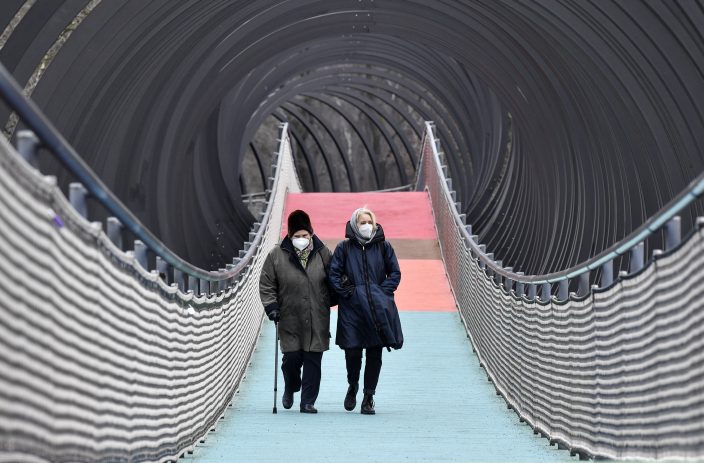 FILE - In this Monday, Jan. 11, 2021 file photo,People wear protective face masks due to the coronavirus pandemic, as they walk over a bridge during the lockdown in Oberhausen, Germany. Armin Laschet, a governor who also leads Merkel’s party, called this week for a vaguely defined 2-3 week “bridge lockdown” to control infections while Germany steps up a so-far slow vaccination campaign. German Chancellor Angela Merkel has thrown her weight behind calls for a 'short, uniform lockdown'. (AP PhotoMartin Meissner, file)

Laschet also called for a meeting between Merkel and governors to coordinate restrictions to be moved up from next Monday, but hit resistance from his colleagues. Merkel spokeswoman Ulrike Demmer said Wednesday there is “no majority” for that.

But Demmer said “every call for a short, uniform lockdown is right.” She said figures on new cases aren’t particularly good at the moment, because of lower testing and reporting over Easter, but a rapid rise in the number of occupied intensive care beds “speaks a very clear language.”

“Joint action would be desirable,” she stressed. “The diversity of the rules that have been agreed on isn't contributing at the moment to safety and acceptance.”

Merkel and the 16 state governors confer every few weeks on coronavirus measures. Those sometimes sprawling and ill-tempered get-togethers have drawn increasing criticism, particularly as governors have frequently taken different approaches to implementing what they agree upon.

Last month, Merkel and the governors sparred for hours before announcing unexpected plans for a five-day Easter shutdown. Merkel then dumped the plans less than 36 hours later after concluding they were unworkable and apologized to Germans.

Meanwhile, Germany's Sept. 26 general election is casting a shadow. Many have viewed the lockdown proposal from Laschet, the governor of North Rhine-Westphalia, as a result of speculation over whether he or Bavarian governor Markus Soeder will become the center-right candidate to succeed Merkel.

Laschet has often advocated allowing more businesses to open, and Merkel recently criticized his state for failing to keep to the rules that had been agreed upon. Soeder has consistently advocated tougher restrictions. At present, polls suggest that voters are considerably more impressed by Soeder. A decision on the candidate is expected by late May.

Soeder told ZDF television Tuesday that he and Merkel had always backed Laschet's latest position, “and everyone who joins in, I think that's great.”

Germany's infection rate is currently lower than that of several neighboring countries, but it is still more than twice the maximum 50 new cases per 100,000 residents the government would like to see.

The country has recorded 2.9 million cases and 77,401 deaths from or with COVID-19 since the pandemic began. It has given a first vaccine dose to 13% of its total population of 83 million, while 5.6% have received two doses. Officials hope vaccinations will accelerate this month.

In addition to vaccines already ordered, Soeder said the Bavarian government plans to sign a preliminary contract Wednesday with a company in the town of Illertissen that would allow it to get 2.5 million doses of the Russian Sputnik V vaccine, probably in July — if the shot is approved by the European Medicines Agency.