French children, parents and teachers are battling with internet connection problems across the country after an abrupt nationwide switch to online learning saturated networks and embarrassed the government.

But frustrated parents are blaming bad planning by the government. 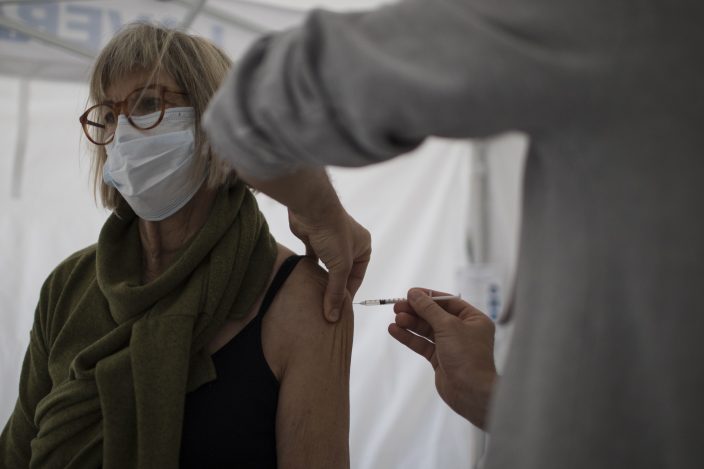 A woman receives the Pfizer COVID-19 vaccine at the Laveran Military Hospital in Marseille, southern France, Wednesday, April 7, 2021. Seven military hospitals also opened vaccination centers on Tuesday, operated by military and civilian staff, in an effort to inject up to 50,000 doses per week, the defense ministry said. (AP PhotoDaniel Cole)

After more than seven months of in-person class, the switch on Tuesday to all-online learning for all of France’s 12 million pupils was plagued with problems. Some were solved by Wednesday, but the Education Ministry announced a second day of cyberattacks on the state-run distance learning network, and acknowledged erratic and slow connections in multiple regions.

For Esther Baumad of Open Digital Education, a leading online teaching platform, the reason was simple: “There were too many people connected at the same time,” she told broadcaster France-Info.

Parents shared advice on class WhatsApp chats and vented on social networks. Teachers muddled through with smaller-than-usual classes because some children couldn’t log on to their networks, or had to cancel classes altogether. 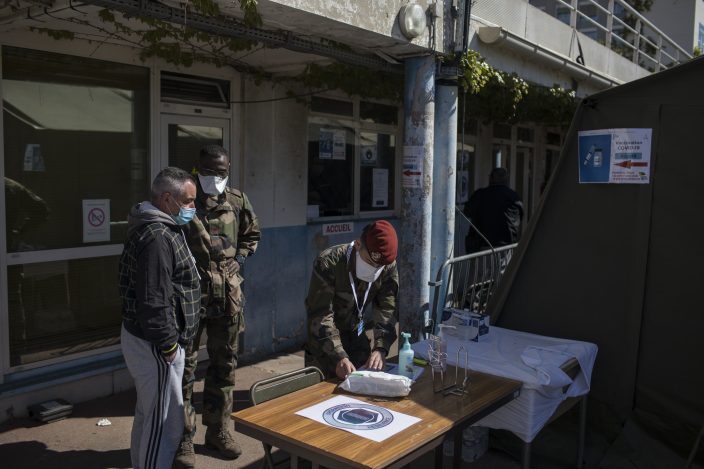 A French soldier receives people at a vaccination center set up at the Laveran Military Hospital in Marseille, southern France, Wednesday, April 7, 2021. Seven military hospitals also opened vaccination centers on Tuesday, operated by military and civilian staff, in an effort to inject up to 50,000 doses per week, the defense ministry said. (AP PhotoDaniel Cole)

“I know it’s not easy,” President Emmanuel Macron said while taking part in an online history and geography class for 14-year-olds in southern France on Tuesday. He acknowledged some “difficulties, some incidents.”

Sitting at his laptop in the presidential palace, Macron watched a lesson on World War II, and thanked the students, teachers and families for adapting to the rapidly developing situation.

His government sent all children back to school full-time in September to reduce learning gaps exposed during virus lockdowns last spring, and to allow parents to get back to work. As a result, most French schools did not undertake major changes to adapt to remote learning like many did in the U.S., where a new survey released Wednesday by the Biden administration found just 34% of students nationwide were learning full-time in the classroom.

France’s already stretched hospitals are struggling with the numbers of new virus patients. The country has reported among the highest number of virus-related deaths in the world, at 97,273.

Meanwhile, France is trying to speed up vaccinations after a slow start. Seven military hospitals started vaccinating civilians this week and a major vaccination center opened at the national sports stadium north of Paris.

France suspends all Brazil flights due to virus variants

France advises vaccine mixing for some, amid clotting fears