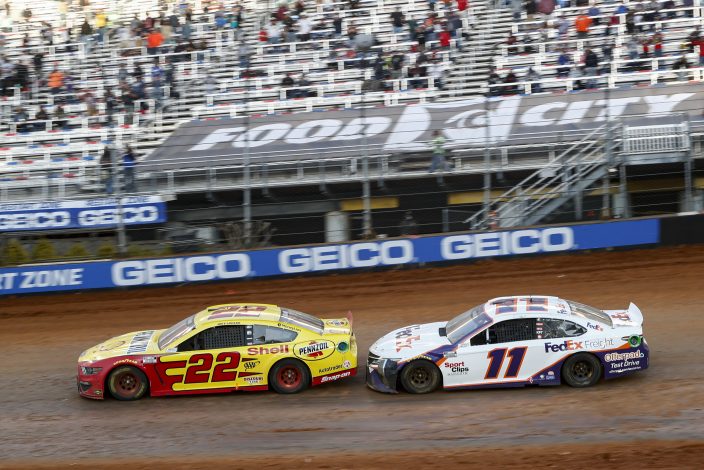 Last race: Joey Logano became the seventh different winner in as many races, leading the last 61 laps to win a rain-delayed race on the dirt at Bristol.

Fast facts: After seven races last season, Logano and Hamlin had each won twice. ... Hamlin leads Logano by 58 points in the standings and his six top-five finishes are twice as many as any other driver. ... Hamlin also leads active drivers with five career victories on the .526-mile oval, but the last of those came in the spring of 2015. ... Truex. is third in points, followed by Kyle Larson and Brad Keselowski. ... Larson leads all drivers with 379 laps led. Logano is a distant second with 259.

Last race: Justin Allgaier took advantage when Martin Truex Jr. was caught speeding on pit road and outran the 2017 Cup champion to the finish at Atlanta.

Fast facts: Reigning series champion Austin Cindric is the only two-time winner through six races. He leads Daniel Hemric by 46 points in the standings with Harrison Burton third, A.J. Allmendinger fourth and Justin Haley fifth. ... Cindric has five top-five finishes. Allmendinger is next with four. ... Cindric has led a series-best 288 laps. Hemric is next, having led 120.

Last race: Martin Truex Jr. led 105 of 150 laps in his first start in the series since 2006 and won on the dirt at Bristol, his first series victory in just his third start.

Fast facts: John Hunter Nemechek, who drives for Kyle Busch, is the series points leader with four top 10 finishes in five races. ... Ben Rhodes, the winner of the season’s first two events, is just six points back and 2020 champion Sheldon Creed is next with three-time series champion Matt Crafton fourth. ... The series will return for a more traditional race on Bristol’s high-banked oval in September.

Last race: Seven-time and defending series champion Lewis Hamilton held off Max Verstappen in the season opener at Bahrain to win for the 13th time in the last 19 races.