ATLANTA — Starting Thursday, Georgia restaurant tables can be a little closer, more people can get together and vulnerable residents are no longer supposed to stay home as Gov. Brian Kemp loosens COVID-19 restrictions.

The Republican governor said Wednesday that it’s part of an effort to show that “Georgia is open for business.”

Kemp announced March 31 that he was loosening restrictions that he had in place for nearly a year. For example, restaurant tables will now be required to be only 3.5 feet (1.07 meters) apart instead of the previous 6 feet (1.83 meters). People in movie theaters can sit closer, and there’s no longer a 50-person limit on gatherings when people are closer than 6 feet, which could allow larger indoor concerts and conventions. 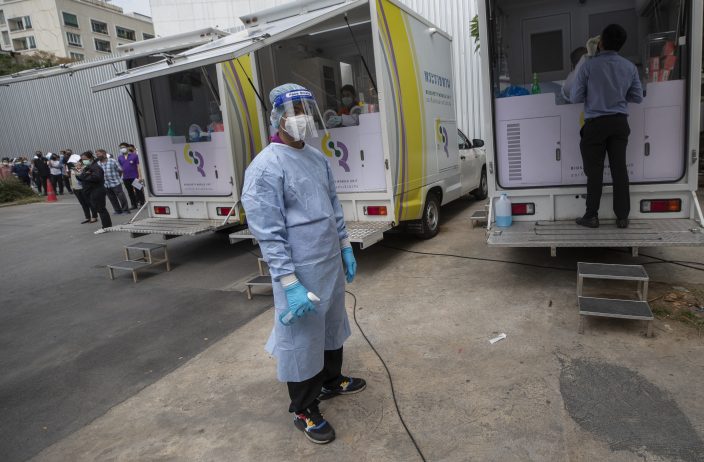 A health worker prepares to collect nasal swab sample from a worker at a local entertainment venue site where a new cluster of COVID-19 infections were found in Bangkok, Thailand, Thursday, April 8, 2021. Thailand has confirmed its first local cases of the coronavirus variant first detected in the U.K., raising the likelihood that it is facing a new wave of the pandemic. (AP PhotoSakchai Lalit)

The governor portrays his new executive order as part of an effort to return to “normal,” continuing to emphasize that economic health is as important as freedom from the respiratory illness that has killed more than 19,000 Georgians.

But it’s not clear if restaurants will be rushing to reopen their self-serve drink stations, if fitness instructors will quickly allow their students to be 6 feet apart instead of the previous 10 feet (3.05 meters), and if movie theaters will let people get as close as 3 feet (0.91 meters). Some business owners say they don’t intend to change much for now. 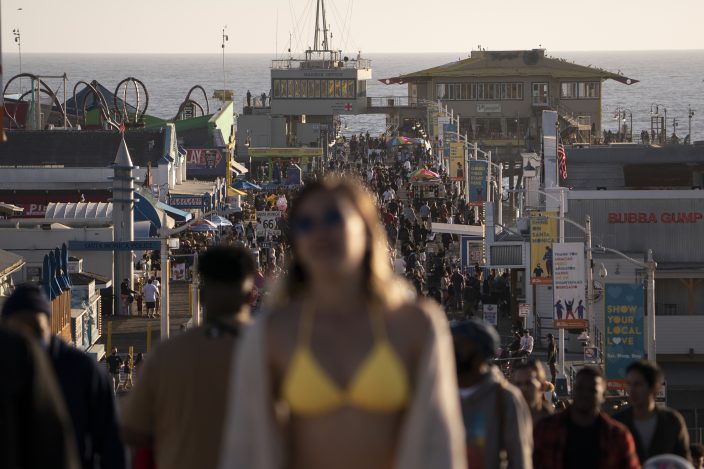 — French children, parents and teachers battled with internet connection problems across the country after an abrupt nationwide switch back to online learning after seven months of in-person class. 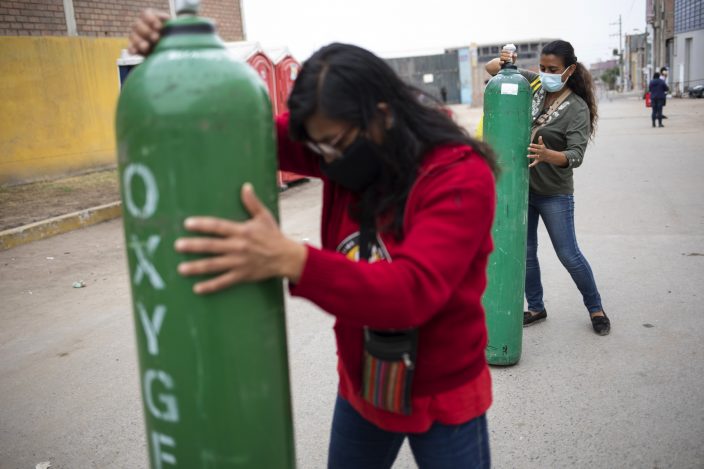 Marlene and Rosalyn Del Aguila roll tanks filled with oxygen to a waiting car, to deliver to their mother who has tested positive for COVID-19, in the Villa El Salvador neighborhood of Lima, Peru, Wednesday, April 7, 2021, amid the new coronavirus pandemic. (AP PhotoRodrigo Abd)

— Alabama Gov. Kay Ivey says the state is shifting to personal responsibility in the fight against COVID-19. Ivey says she was issuing a “greatly slimmed down” health order that has few restrictions but encourages people to continue to take precautions such as voluntarily wearing masks. 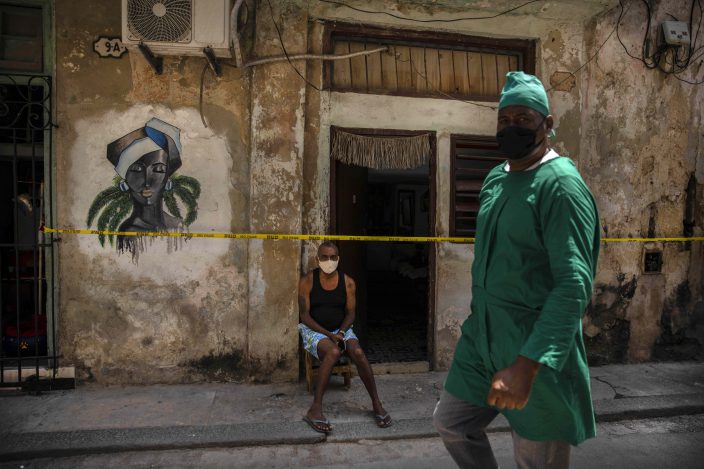 A health worker wearing a mask as a precaution against the spread of the new coronavirus walks in front of a man sitting at the entrance of his quarantined house in Havana, Cuba, Wednesday, April 7, 2021. (AP PhotoRamon Espinosa)

BEIJING — Chinese officials say 11 more people have been diagnosed with COVID-19 in a southwestern city bordering Myanmar that is the scene of China’s current sole active outbreak.

Cases in the Yunnan province city of Ruili have topped 100, including those not showing symptoms.

However, large-scale transmission appears to have been curbed by a campaign to vaccinate all 300,000 residents of the city. People there have been told to stay home and 45 residential compounds are under complete lockdown. 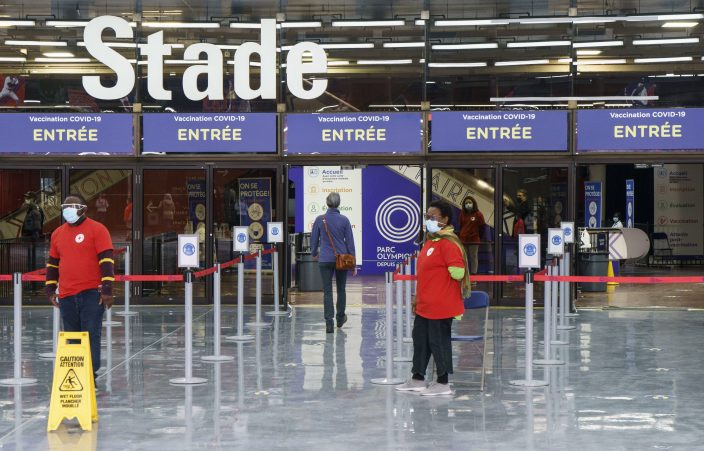 A lone patient enters a COVID-19 vaccination clinic during the coronavirus pandemic at Olympic Stadium in Montreal, on Wednesday, April 7, 2021. (Paul ChiassonThe Canadian Press via AP)

China has virtually stamped out new local cases across the country through aggressive lockdowns, mask wearing, electronic monitoring and other measures. With most economic and social activity resuming, those measures are being gradually reduced, although mask wearing indoors and on public transport remains almost universal.

SEOUL, South Korea — South Korea has reported 700 more cases of the coronavirus as the speed of viral spread approaches levels seen during the worst of the country’s outbreak in winter.

The numbers released by the Korea Disease Control and Prevention Agency on Thursday brought the national caseload to 107,598, including 1,758 deaths.

The daily jump was the highest since Jan. 5 when 714 cases were reported.

Around 500 of the new cases are in the densely populated Seoul metropolitan area, which has emerged as the center of the country’s epidemic since a winter surge that peaked with more than 1,200 infections added on Christmas Day.

Health authorities, who are also wrestling with a slow vaccine rollout, are expected to announce measures to strengthen social distancing following a meeting Friday.

Currently, only people 50 years and older as well as anyone 35 to 49 with chronic health conditions are authorized to receive a vaccine.

Gov. Pedro Pierluisi also announced Wednesday that he is implementing more stringent measures to fight a recent spike in coronavirus infections. A 10 p.m. to 5 a.m. curfew will go into effect Friday, and businesses will be forced to close by 9 p.m. That is two hours earlier than has been allowed.

Puerto Rico has recorded more than 199,000 coronavirus cases and more than 2,000 deaths related to COVID-19.

DETROIT — Michigan’s state health director says the government is focusing on getting more people vaccinated rather than imposing new restrictions on the economy amid a wave of new coronavirus cases and the crowding of hospitals with COVID-19 patients.

Elizabeth Hertel said Wednesday: “Our focus right now continues on making sure we’re getting as many people vaccinated as possible. We still do have a number of restrictions in place that limit gathering sizes.”

Her comments came as federal statistics showed Michigan leads the U.S. in new coronavirus cases. The state recorded more than 46,000 cases, or 469 per 100,000 people, in the last seven days. That is far ahead of No. 2 New Jersey, at 321.

MADRID — Spain plans to join other European nations in limiting the use of the AstraZeneca vaccine to the elderly due to concerns over links to extremely rare blood clotting.

Spanish Health Minister Carolina Darias said after meeting with regional health chiefs Wednesday that authorities will limit the use of the vaccine in those over 60 years old.

The decision came after the European Medicines Agency said it had found a “possible link” between the shot and the rare clots.

Last week Germany and France limited the vaccine to elderly groups, and earlier Wednesday British authorities recommended that the vaccine not be given to adults under 30. Belgium said Wednesday it would not allow its use for people under age 56.

The EMA advised no such age restrictions, saying the benefits of the vaccine far exceed the very rare cases of thrombosis.

TALLAHASSEE, Fla. — The office of Florida Gov. Ron DeSantis confirms he has received a single-dose coronavirus vaccine. He did so out of the public eye even as governors elsewhere across the political spectrum have been vaccinated publicly to reassure Americans that the shots are safe.

DeSantis had recently said he would get vaccinated soon — but no announcement was made by his office, nor was there any media presence to witness the event. Some of his top lieutenants said they were unaware the governor had already been vaccinated, even as they work to persuade Floridians to get inoculated against a virus that has infected more than 2 million people in Florida and killed nearly 34,000.

Little has gotten the vaccine and says he strongly encourages others to get vaccinated as well. But he says he has serious concerns that a vaccine passport requirement will violate medical privacy rights. Texas Gov. Greg Abbott issued a similar order Wednesday and Florida Gov. Ron DeSantis did so Friday.

The White House has ruled out a national “vaccine passport,” saying it is leaving it to up the private sector if companies want to develop a system for people to show they have been vaccinated.

TORONTO — Canada’s most populous province plans to vaccinate those 18 and over in hot spot areas in and around Toronto and plans to vaccinate some teachers amid a third surge of coronavirus infections fueled by more-contagious virus variants.

Ontario declared another state of emergency and will now allow all adults in certain postal codes to get priority access to vaccines. Ontario will also close nonessential stores to in-person shopping and limit big box stores to essential items such as groceries and pharmacy supplies.

The province is calling its latest measures a stay-at-home order though schools in most of the province will remain open and golf courses remain open. Ontario has seen seeing more than 3,000 new infections a day in recent days and record intensive care numbers.