A Georgia state lawmaker who was arrested at the state Capitol after the governor signed a sweeping new election law urged people on Thursday to continue fighting that law.

Rep. Park Cannon, an Atlanta Democrat was arrested March 25 after knocking on the door of the governor's office as he made livestreamed comments in support of the controversial new election law he'd just signed. She has turned her action that day into a rallying cry.

“Today, I vow to you that I will keep knocking and I ask you, Georgia, to keep knocking. America, keep knocking. All of the marginalized people, keep knocking,” Cannon said during a news conference. The remarks came a day after Fulton County District Attorney Fani Willis announced she wouldn't pursue charges against Cannon. 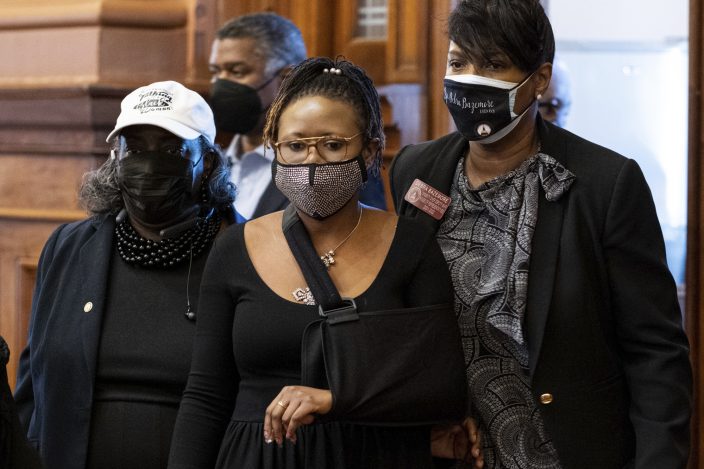 Georgia State Rep. Park Cannon, D-Atlanta, walks into the House Chamber of the State Capitol in Atlanta on Monday morning, March 29, 2021 after being arrested last week for knocking on the governor's office door as he signed voting legislation. (AP PhotoBen Gray)

After the legislature had adjourned on March 25, Cannon said, she heard that Gov. Brian Kemp planned to sign the election bill and wanted to be in the room.

“I wanted Kemp to have to look at my face and see the pain and disappointment, the contempt that I had for his insidious act of betrayal against Georgia voters, Georgia citizens,” she said.

The new law follows former President Donald Trump’s repeated, baseless claims of voter fraud after he narrowly lost to President Joe Biden in the state that has reliably voted for Republican presidential candidates in recent decades. 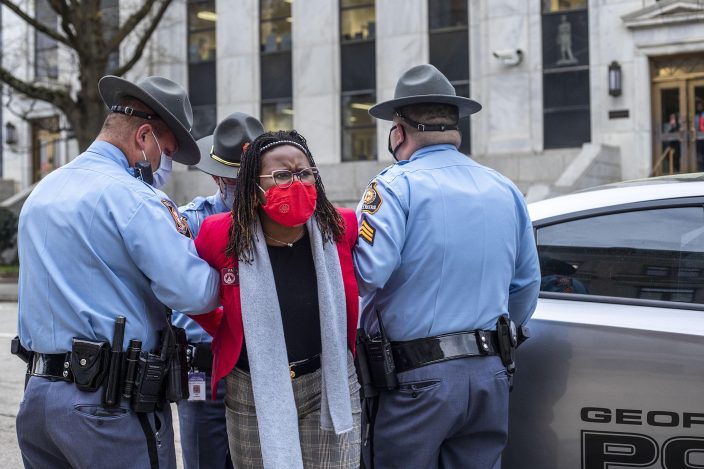 State Rep. Park Cannon, D-Atlanta, is placed into the back of a Georgia State Capitol patrol car after being arrested by Georgia State Troopers at the Georgia State Capitol Building in Atlanta, Thursday, March 25, 2021. Cannon was arrested by Capitol police after she attempted to knock on the door of the Gov. Brian Kemp office during his remarks after he signed into law a sweeping Republican-sponsored overhaul of state elections that includes new restrictions on voting by mail and greater legislative control over how elections are run. (Alyssa PointerAtlanta Journal-Constitution via AP)

Kemp and other supporters of the GOP-backed law have said it was necessary to restore voter confidence and to ensure that the state's elections are secure, accessible and fair. But Democrats and other critics have raised concerns about increased partisan influence in elections and said it will suppress votes, particularly in communities of color.

The law adds a new photo ID requirement to vote absentee by mail, gives the legislature more control over election administration, gives State Election Board new powers to replace local election officials, prohibits people from giving water and snacks to people waiting in line, and makes some changes to early voting, among other things.

Cannon said it is important for voters to know what's in the law.

“As terrible and suppressive as it is, it is still the law," she said. "Until we have changed the new law, we must understand the new law.”

Cannon appeared Thursday with her arm in a sling and her lawyers say she is still receiving treatment for injuries suffered during her arrest. Attorneys Gerald Griggs and state Rep. David Dreyer, who are representing Cannon, said they are still investigating and considering what legal action they may take.