The Japanese government has decided to dispose of massive amounts of treated but still radioactive water stored in tanks at the wrecked Fukushima nuclear plant by releasing it into the Pacific Ocean, local media reported Friday, a conclusion widely expected but delayed for years amid protests and safety concerns.

Prime Minister Yoshihide Suga told top fisheries association officials on Wednesday that his government believes the release into the sea is the most realistic option and that a final decision would be made “within days.”

A formal announcement is expected soon at a meeting of key ministers, Industry Ministry officials said Friday. They declined to confirm reports from Kyodo News and other media that the ministers will meet as early as Tuesday and have already reached a final decision. 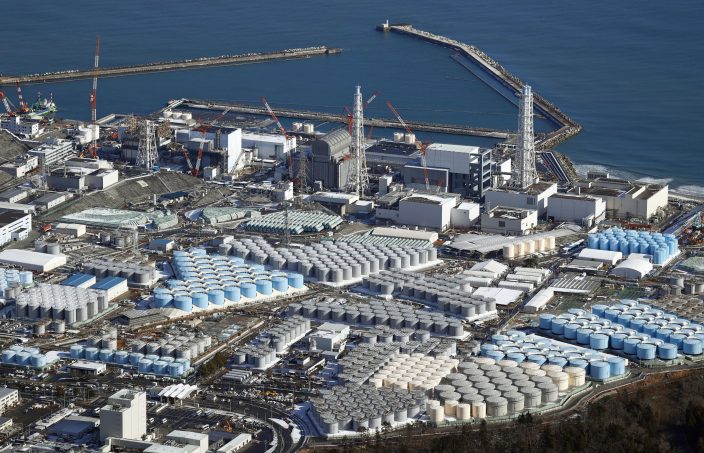 An aerial photo shows Fukushima Daiichi nuclear power plant in Okuma town, Fukushima Prefecture in January, 2021. The Japanese government has decided to get rid of the massive amounts of treated but still radioactive water stored in tanks at the wrecked Fukushima nuclear plant by releasing it into the Pacific ocean, a conclusion widely expected but delayed for years amid protests and safety concerns. Prime Minister Yoshihide Suga on Wednesday, April 7, 2021, told top fisheries association officials that his government believes the release to sea is the most realistic option and a final decision will be made “with days.”(Kota EndoKyodo News via AP)

A government panel, after seven years of discussion on how to dispose of the water without further harming Fukushima's image and the region's fisheries and other businesses, prepared a report two years ago saying a release into the sea is the most realistic method. The report mentioned evaporation as a less desirable option.

The release is expected to start in about two years after the utility, Tokyo Electric Power Co., sets up a facility approved by nuclear authorities. According to a preliminary estimate, a gradual release of the water is expected to finish before the plant cleanup ends.

A release of the water into the sea has faced fierce opposition from local fishermen and residents. Japan Fisheries Cooperatives Chairman Hiroshi Kishi said he rejects Suga's proposed release plan and demanded the government explain how it will address damage to the fishing industry.

The government has said it will do its utmost to support local fisheries and provide compensation for any damages.

In the decade since, cooling water has constantly escaped from the damaged primary containment vessels into the basements of the reactor buildings. To make up for the loss, additional water has been pumped into the reactors to cool the melted fuel remaining inside them. Water is also pumped out and treated, part of which is recycled as cooling water, and the remainder stored in around 1,000 tanks at the plant.

TEPCO, the utility, is contending with about 1.24 million tons of radioactive water.

TEPCO and government officials say tritium, which is not harmful in small amounts, cannot be removed from the water, but all other radionuclides selected for treatment can be reduced to safe levels for release. But some scientists say the long-term impact on marine life from low-dose exposure from such large volumes of water is unknown.

The operator says the tanks’ 1.37 million-ton storage capacity will be full in 2022, and that tanks will need to be removed to make room for decommissioning facilities.