The medieval town of Kilkenny in the southeast of Ireland is an unlikely home for a perennial Oscar contender. But there, among cathedral spires and castle parapets, the animation studio Cartoon Saloon has carved out a factory of hand-drawn artistry and local folklore that has persisted and flourished well beyond its creators’ expectations.

When Tomm Moore and Ross Stewart, directors of the enchanting Oscar-nominee “Wolfwalkers,” met growing up in Kilkenny — or even after they finished college and were setting out as animators — any success seemed sure to be found in typical entertainment epicenters like London, New York or Los Angeles.

Instead, they decided to stay in Kilkenny with the mission of making a single film. (It turned out to be 2009’s Oscar-nominated “The Book of Kells.”) Their beginning staff of 12 worked out of an old orphanage. Twelves years later, there are nearly 400 working for Cartoon Saloon and their sister studio, Lighthouse Studios, in the heart of Kilkenny. The Lighthouse offices are housed in the secondary school Moore and Stewart once attended — a very sports-centric school, the directors recall. 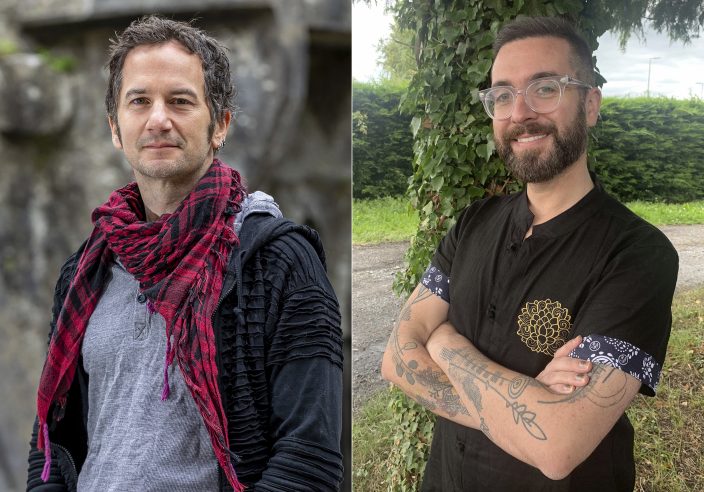 This combination of photos released by Apple shows filmmakers Ross Stewart, left, and Tomm Moore, who are nominated for an Oscar for best animated film for their work on "Wolfwalkers." (Apple via AP)

“Our teenage selves would be glowing with pride,” Stewart says.

Formed when much of the animation world was following Pixar into computer generated animation, Cartoon Saloon is an underdog no more. “Wolfwalkers,” their most ambitious film, one that completes a trilogy of Irish folklore begun with “The Secret of Kells,” is expected to give Pixar’s “Soul” a run for its money at the Academy Awards later this month. 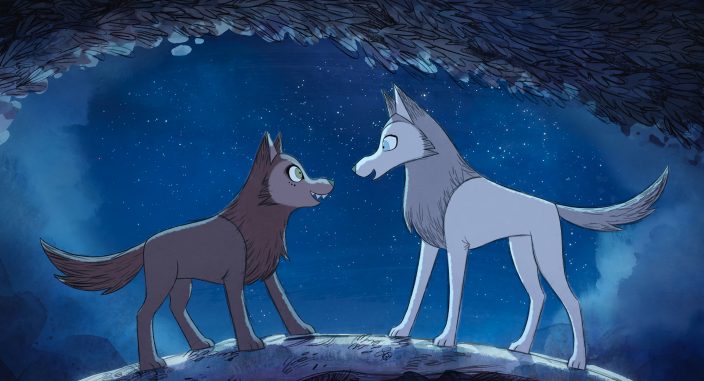 The independent studio now has some very deep-pocketed backers in Apple, which released “Wolfwalkers” along with theatrical distributor GKids. Cartoon Saloon’s next film, an adaptation of “My Father’s Dragon” by Cartoon Saloon co-founder Nora Twomey, is for Netflix.

Founded in 1999 by Moore, Twomey and producer Paul Young, Cartoon Saloon has arrived at these heights by doing everything they weren’t supposed to — making uncompromising, authentically Irish, hand-drawn animation in Moore and Stewart's hometown. No one is more surprised than they are about how it’s all turned out.

“People just told us we were mad," says Moore, chuckling. 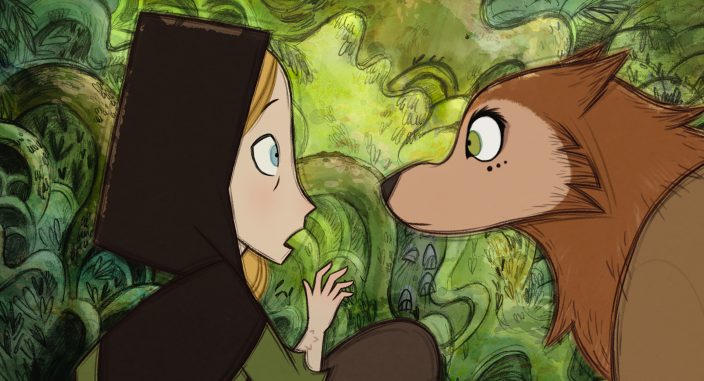 “Once you put down even the tiniest little root in a place, it’s very hard to move,” says Stewart. “There was talk along the way to have an L.A. studio or even a Dublin office. Instead, it just grew and grew and grew.”

“Wolfwalkers” is a pinnacle for Cartoon Saloon in part because it’s set right in Kilkenny. The film, streaming on Apple TV+ and recently brought back into theaters, is about Robyn, the daughter of a British soldier in 17th-century Ireland, who comes upon a “wolfwalker” — a human who can take the form of a wolf. That, naturally, comes from mythology, but the historical backdrop of “Wolfwalkers” is true; this is the time of Oliver Cromwell’s brutal invasion of Ireland.

Set between the woodcut-styled drawings of the British-controlled castle and incredibly lush, swirling forests, “Wolfwalkers” is — like Cartoon Saloon, itself — a tale of reclamation. 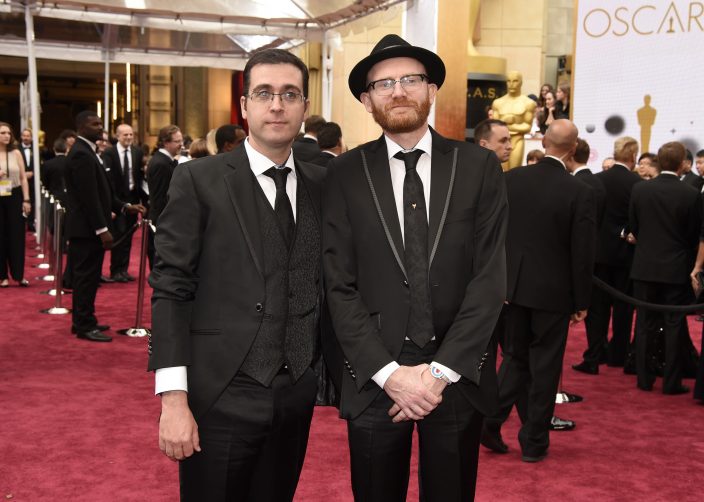 FILE - Filmmaker Tomm Moore, left, and Paul Young, nominated for "Song of the Sea," arrive at the Oscars in Los Angeles on Feb. 22, 2015. This year Moore, along with co-director Ross Stewart are nominated for an Oscar for best animated feature for "Wolfwalkers." The film was produced by Young. (Photo by Chris PizzelloInvisionAP, File)

“I definitely felt these three movies that I directed and co-directed were about speaking back to the next generation stuff that I was afraid was going to be completely lost,” Moore says by Zoom from Kilkenny, alongside Stewart. “I had grown up being completely immersed in Batman comics and Japanese and American cartoons and didn’t realize this was all around me.”

Often, their surroundings play directly into the films. On a recent day, a stroll in Kilkenny’s Millennium Forest — planted 20 years ago with native trees — had Moore, contemplating the layers of sediment and history beneath him, musing about a possible “Wolfwalkers” spinoff.

Increasingly, they’re finding a flock of animators from across Europe eager to follow in their footsteps, as Ireland’s answer to Japan’s Studio Ghibli. For “Wolfwalkers,” Moore showed the storyboard artists the intensely period-appropriate horror film “The Witch” for inspiration. One artist got so into capturing the era that she animated constellations as they were in 1650.

“When people come here, they’re taking a risk,” says Young. “They’re coming to live in your small town. You better have work for the when they get here.”

With a now teeming staff, the earlier, scrappier days of Cartoon Saloon are still vivid to the founders. When the Oscar nomination for “The Secret of Kells” — to be followed five years later by another for “Song of the Sea” — they were in a meeting working out how to stay financial afloat for the next two months.

“We survived, but it was tough times,” recalls Young. “At the early stage, the mistake we made was thinking: If we’ve got money, we’re hiring artists. I think what we needed was a few more account-types.”

Stewart, art director on “Kells,” a concept artist for “ParaNorman” and a painter, always believed hand-drawn animation had more potential. Unlike digital technology, it doesn’t age. In “Wolfwalkers,” you can often see pencil lines have deliberately been left in. Moore wanted to be even more experimental on “Wolfwalkers,” playing with aspect ratios and perspectives.

“We kind of decided we didn’t want to do more after this. We wanted to take a break and reflect. Definitely for me, anyway,” he says. “So I said, ‘Let’s try everything that we said we were going to do and either couldn’t afford to do, didn’t know how to pull it off or were wary of.’ And I don’t think we even scratched the surface. There’s still so much more.”

Stewart, a nature lover, had planned to this year to reach the top of every peak in Ireland. Then came a lockdown that has since December limited everyone to within 5 kilometers of their home. But Cartoon Saloon has still gone around the world like never before. There’s even a billboard for “Wolfwalkers” on Sunset Boulevard in Los Angeles.

“We’ve never had that kind of attention before. I’d just love to have been there to take a picture of Tomm in front of one of those big billboards,” says Twomey. “I don’t think things will be the same for us after ‘Wolfwalkers.’”

It’s a dramatic change from 11 years ago, when Moore remembers going into a cinema in Galway and seeing posters of “Inside Out” papered across the walls, with one of “Song of the Sea” tucked away. But, still, Pixar — which takes after Silicon Valley the way Cartoon Saloon does Kilkenny — is again the Oscar favorite this year with “Soul.”

“Always Pixar’s way out in front, and they have a beautiful film. Damn them,” Moore laughs. “If only they could have released a lackluster film for a change.”

But it’s been a time for reflection for the filmmakers on an unlikely journey that led them back home.

“I thought I’d be in New York being all cool,” says Moore, shaking his head. “But here I am.”

Stewart smiles. “You’re in Kilkenny being all cool.”