Ronald Acuña Jr. had four hits, including a long two-run homer that gave Atlanta the lead, and made a leaping catch to support Charlie Morton's six strong innings, leading the Braves to an 8-1 win over the Philadelphia Phillies on Friday night.

Morton (1-1) permitted one run and four hits. The veteran right-hander struck out seven and walked one.

Acuña's fifth-inning blast off Zack Wheeler (1-1) traveled an estimated 456 feet, landing deep in the center-field seats behind the Braves bullpen for a 2-1 lead. He also had two doubles and an infield single. 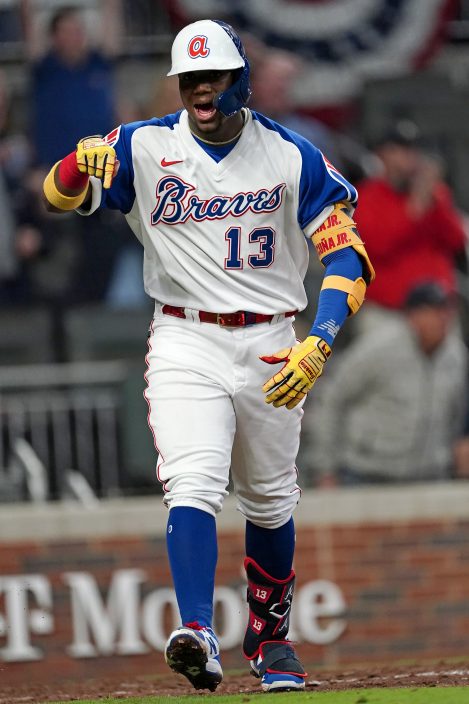 Pinch hitter Ehire Adrianza connected for a three-run homer and Freddie Freeman added a two-run shot as Atlanta's hitters shook off a slow start to the season. The Braves were held to a combined three runs while being swept in a three-game series at Philadelphia last week to open the season.

Leading 3-1, Morton escaped the sixth inning with runners on first and third when Acuña made a leaping catch of Alec Bohm's drive at the warning track in right field.

Morton, 37, won his first home start with Atlanta since his 2008 rookie season. He returned to Atlanta as a free agent following 12 seasons with Pittsburgh, Houston and Tampa Bay. 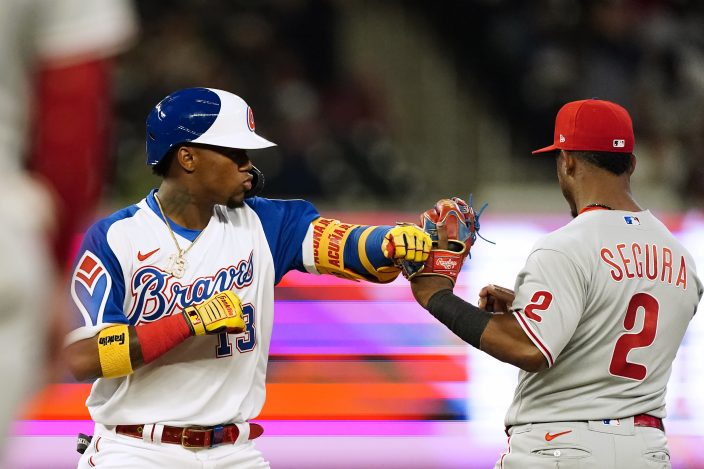 Adrianza was reinstated from the restricted list before the game. His homer off Brandon Kintzler in the sixth drove in Austin Riley and Cristian Pache, who reached on errors by Bohm at third base. Freeman's homer off David Hale in the eighth pushed the lead to 8-1.

Phillies manager Joe Girardi then made came out to the mound. Though pitching coach Caleb Cotham was out for a chat with Wheeler minutes earlier, Girardi didn't appear to realize it marked the second mound visit of the inning and Wheeler had to be removed. Girardi turned to head back to the dugout before being called back to the mound by the umpires to make the mandatory pitching change. 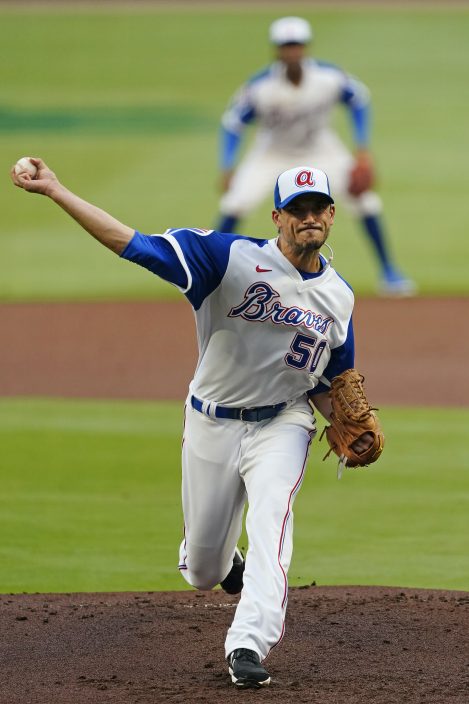 The Braves won their home opener before a crowd of 14,302. The Braves are allowing about one-third of the seats at Truist Park to be used in their first homestand. They plan to expand that to 50% in their next homestand. 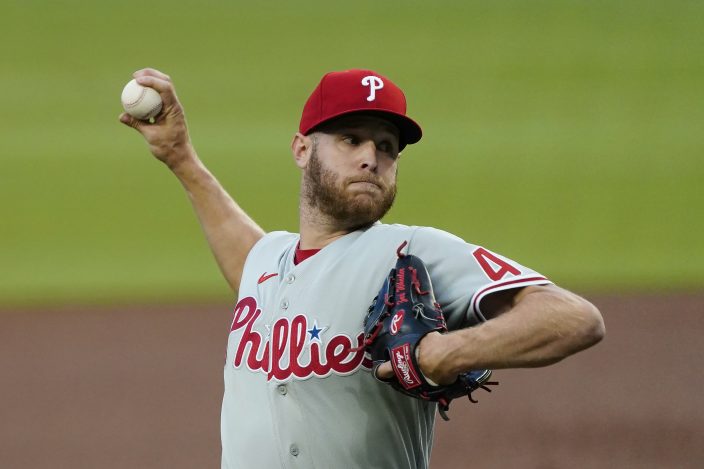 The Braves wore their 1974 uniforms to honor Hall of Famers Phil Niekro and Hank Aaron. The numbers 35 and 44 are stitched on the back of the Braves' caps this season to honor Niekro and Aaron, respectively, who died in the last year. Aaron's 44 was painted on the outfield grass.

Braves: RHP Chris Martin may be available on Saturday after working out before the game. Martin left a relief appearance Sunday at Philadelphia with what manager Brian Snitker described Friday as “nerve stuff in his fingers” that caused numbness. Martin is expected to work as one of Atlanta's key late-game relievers. ... Infielder Johan Camargo was optioned to the Braves' alternate training site with Adrianza's return. 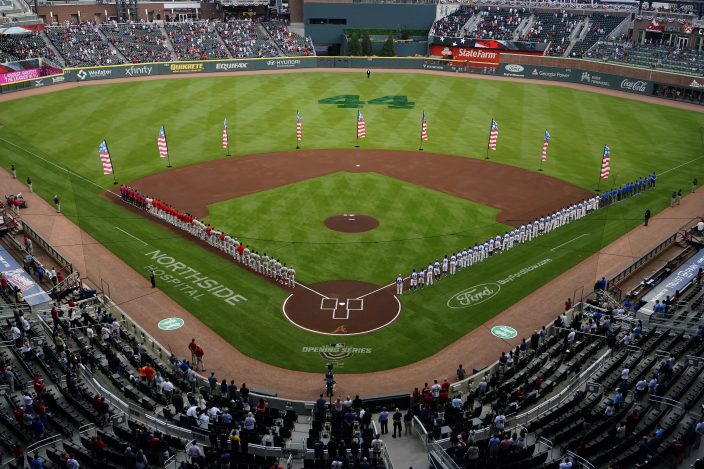 The Philadelphia Phillies and the Atlanta Braves line the base lines for the national anthem before a baseball game Friday, April 9, 2021, in Atlanta. (AP PhotoJohn Bazemore)

Right-hander Edgar Santana also was optioned to Atlanta's alternate training site after he was acquired from the Pittsburgh Pirates for cash considerations. Santana, 29, was designated for assignment by Pittsburgh on Monday.

Santana last pitched in the majors in 2018, when he was 3-4 with a 3.26 ERA in 69 games with the Pirates. He missed the 2019 season following Tommy John surgery and was suspended 80 games in 2020, which covered the abbreviated season, after testing positive for Boldenone, a performance-enhancing substance.

Atlanta Braves' Ronald Acuna Jr. (13) follows through on a double in the sixth inning of a baseball game against the Philadelphia Phillies, Friday, April 9, 2021, in Atlanta. (AP PhotoJohn Bazemore)

Atlanta's Ian Anderson (0-0, 1.80 ERA) will face Philadelphia's Zach Eflin (0-0, 1.29 ERA) in a rematch of right-handers when the three-game series continues Saturday night. Eflin allowed one run in seven innings in the Phillies' 2-1 home win over Anderson and the Braves on Sunday. 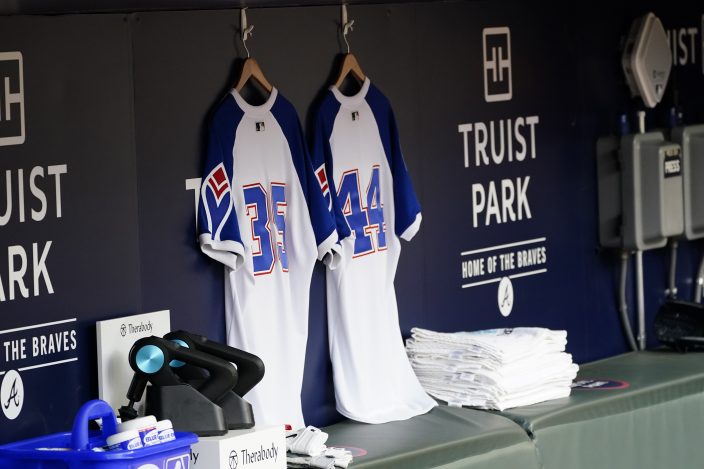 Atlanta Braves jerseys baring the numbers (35) for former Braves players Phil Niekro and (44) for Hank Aaron are hung in the dugout before a baseball game against the Philadelphia Phillies, Friday, April 9, 2021, in Atlanta. Both Aaron and Niekro died in the off season. (AP PhotoJohn Bazemore)

Adrianza, Braves rally for 8-7 win over Phillies in 12th

Phillies offense breaks out in 12-2 rout of Morton, Braves