Jonas Johansson made 28 saves in his first career shutout, and Valeri Nichushkin scored in the Colorado Avalanche's 2-0 victory over the Anaheim Ducks on Friday night.

Mikko Rantanen added an empty-net goal in the final minute as the West Division-leading Avalanche bounced back from an embarrassing 8-3 loss Wednesday to Minnesota, one that ended their streak of earning a point in 15 consecutive games.

Nathan MacKinnon extended his points streak to eight games with an assist on Rantanen's late goal, which was Rantanen's seventh in seven games against the Ducks this season. 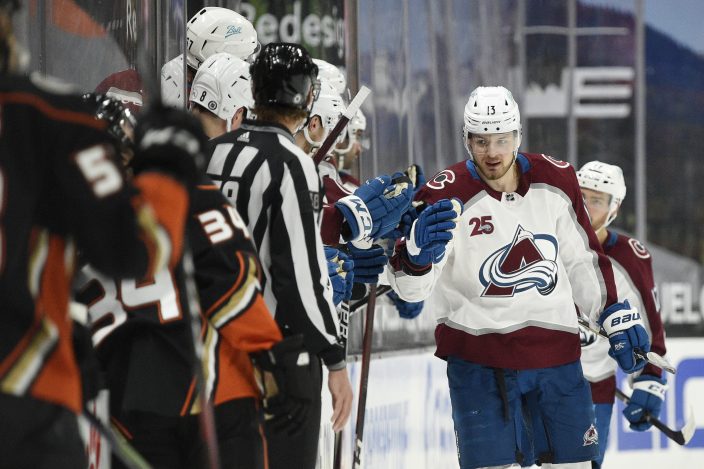 Johansson made his case to be Philipp Grubauer’s backup in a strong performance against the last-place Ducks. The Avalanche are in the trade market for a backup goalie for the playoff run, but the 6-foot-5 Johansson has allowed only three goals in his last three appearances for the Avs, who acquired him March 20 from Buffalo.

Gibson and the Ducks held the NHL's highest-scoring team to just one even-strength goal while largely shutting down MacKinnon's potent line, but low-scoring Anaheim was shut out for only the second time this season. 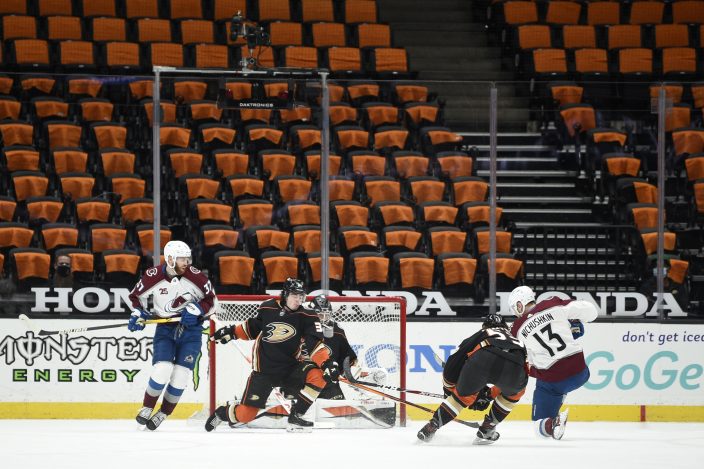 Nichushkin put Colorado on the board with his quick shot from the slot late in the second period, converting a one-timer to Gibson's short side on a slick pass from Ryan Graves.

Four of Nichushkin's nine goals this season have come in the Avalanche's last five games against Anaheim, including his previous goal March 29 in Denver.

Colorado had won five straight and earned points in 15 consecutive games before its embarrassing loss at Minnesota. The Avs rebounded from their first regulation loss since March 8 with their fifth win in seven meetings with Anaheim this season. 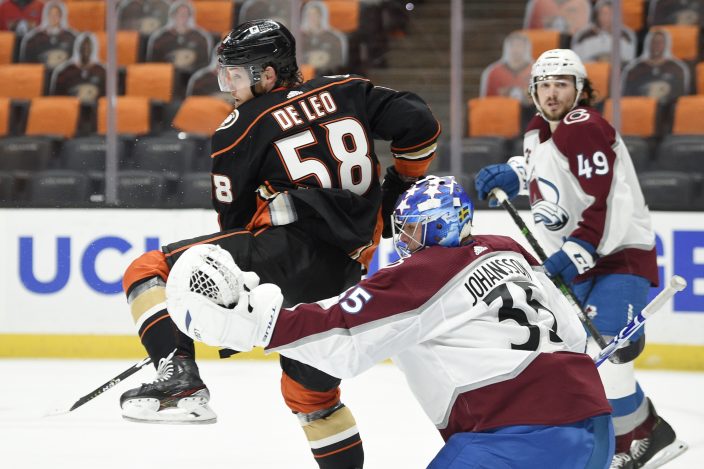 Chase De Leo suited up for Anaheim for the first time this season, playing in his fifth career NHL game. The 25-year-old center from nearby La Mirada grew up cheering for the Ducks, who acquired him from Winnipeg in 2018 and used him for one NHL game in each of the previous two seasons.

Avs forward Jacob MacDonald sat out to begin his two-game suspension for hitting Minnesota's Ryan Hartman in the head.

Earlier in the day, Colorado reacquired defenseman Patrik Nemeth from Detroit for a fourth-round pick. Nemeth was a key component of the Avs' blue line for two seasons from 2017-19, and he'll join an already deep defense for the stretch run.

The teams finish their season series Sunday at Honda Center.

Ducks use strong offensive game to take down Avalanche 3-2