Eugenio Suárez started the 10th on second base and Barnhart brought him home with a two-out single to left-center off Alex Young (0-2). Cincinnati's Amir Garrett got out of a bases-loaded jam to earn his second save, retiring Pavin Smith on a slow grounder for the final out.

The Diamondbacks trailed 5-0 before scoring three times in the seventh. Kole Calhoun's two-out, two-run double was the big hit in the rally. 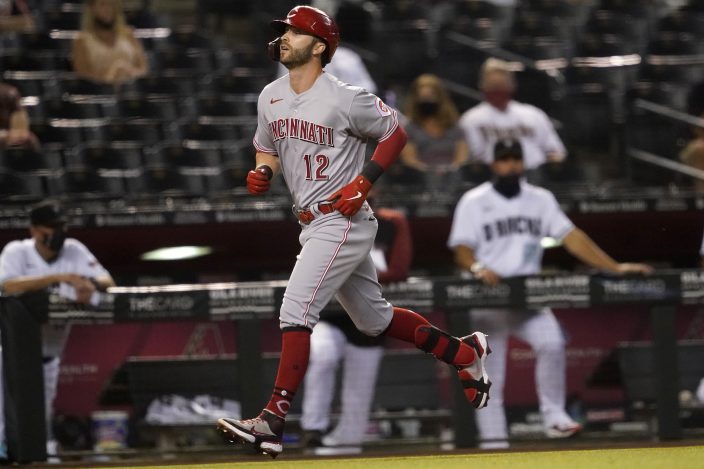 Cincinnati Reds' Tyler Naquin rounds the bas after hitting a solo home run against the Arizona Diamondbacks during the fourth inning of a baseball game, Friday, April 9, 2021, in Phoenix. (AP PhotoMatt York)

Eduardo Escobar then tied it with a towering two-run homer in the eighth off Lucas Sims. The second baseman pumped his fist as he rounded first base after belting his second homer of the season.

The Reds came into Friday's game on an offensive roll, batting .316 with 14 homers during their 5-1 homestand to start the season. The team's 57 runs through six games were a franchise record.

It didn't take Cincinnati's bats to get going on the road in Arizona's home opener: Jesse Winker smoked a double off the top of the wall near the 413-foot sign in right-center to start the game. 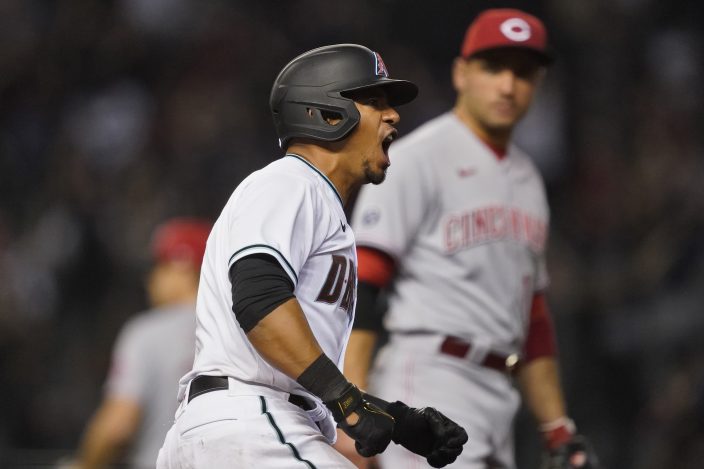 Winker gave the Reds a 1-0 lead in his second at-bat, slicing a single to left field that scored Barnhart. Naquin crushed a solo homer — his fifth in his first 21 at-bats this season — to push Cincinnati ahead 2-0 in the fourth. The Reds added two more runs in the fifth and another in the sixth.

The Diamondbacks fell to 2-6 for the season and have lost three straight.

Tyler Mahle started for the Reds, struck out six and didn't give up a hit, but he also walked four and needed 92 pitches to get through four innings. Cionel Perez (1-0) got the win, retiring two batters in the ninth. 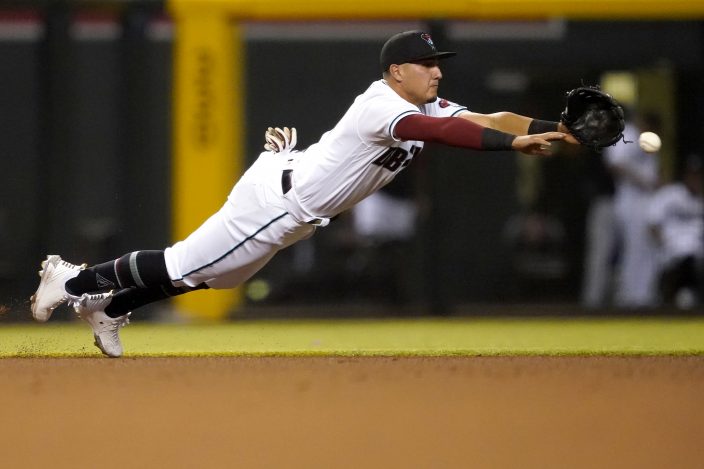 The D-backs hosted fans at Chase Field for the first time since Sept. 29, 2019 — 558 days ago — when they beat the San Diego Padres 1-0 in the season finale. Arizona announced a socially-distanced crowd of 19,385, which was a sellout. The stadium can normally hold about 48,000.

Arizona pitcher Madison Bumgarner was used as a pinch hitter with two outs in the ninth. Lovullo went with Bumgarner despite having two position players — Geraldo Perdomo and Stephen Vogt — available on the bench. 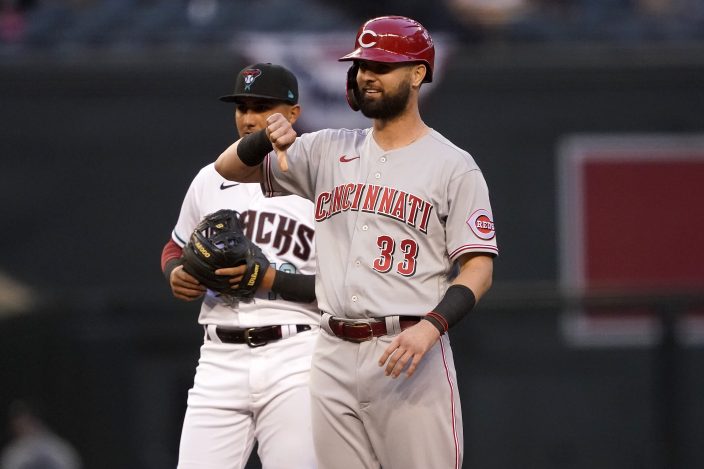 Cincinnati Reds' Jesse Winker (33) gives the thumbs down after the umpires ruled his hit a double instead of a home run during the first inning of a baseball game against the Arizona Diamondbacks, Friday, April 9, 2021, in Phoenix. (AP PhotoMatt York)

Bumgarner is one of the better hitting pitchers in the big leagues, with 19 career homers. But the decision didn't work out this time: He popped out to third base.

Naquin's homer in the fourth had an exit velocity of 111.3 mph and traveled 454 feet over the pool in right-center field. 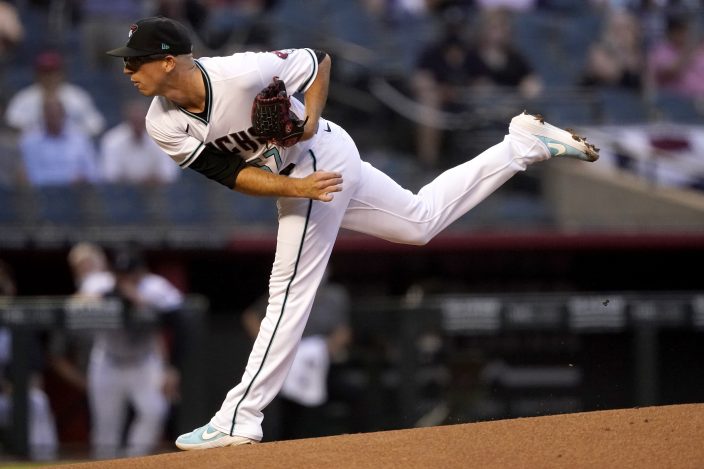 During pregame ceremonies, the Diamondbacks honored Mike Bell, who died of cancer at the age of 46 during spring training. Bell was part of the D-backs' player development department for 13 years before joining the Twins in 2020. Bell is also the brother of Reds manager David Bell. 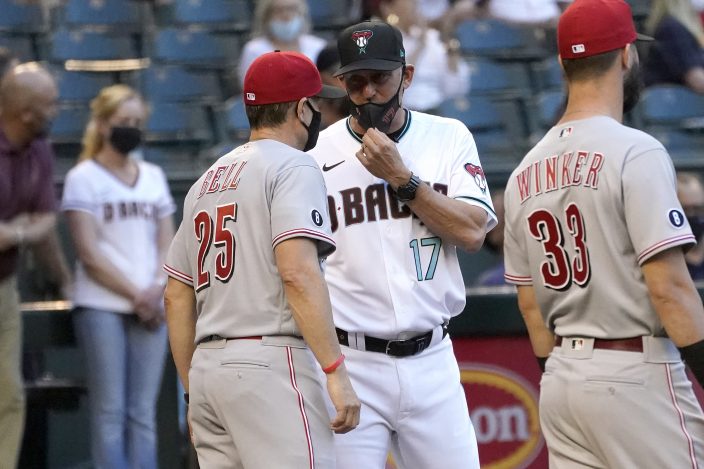 Reds: Winker left in the fifth inning because of calf cramps.

D-backs: Lovullo said that Nick Ahmed is close to returning to the lineup. The two-time Gold Glove shortstop has been dealing with knee soreness but has been getting at-bats and playing in the field at the team's alternate site during intrasquad games. ... CF Ketel Marte had an MRI on his ailing hamstring on Friday. Marte was put on the 10-day injured list after suffering the injury on Wednesday in Denver. ... Calhoun played his first game of the season after needing surgery to repair the meniscus in his right knee. 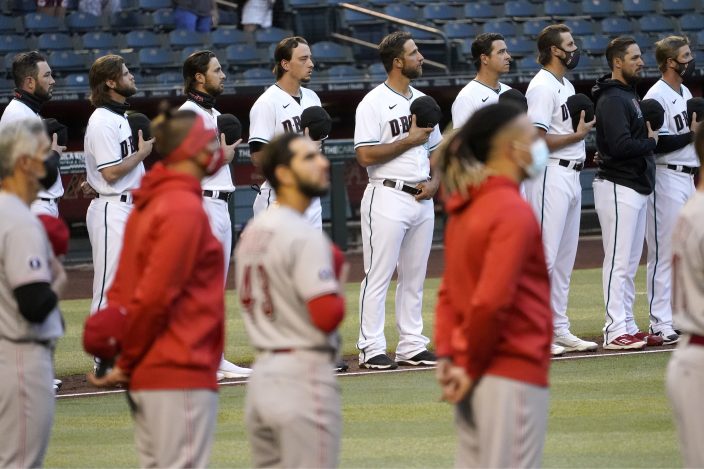 Arizona Diamondbacks and Cincinnati Reds players stand for the national anthem prior to a baseball game, Friday, April 9, 2021, in Phoenix. (AP PhotoMatt York)

The Diamondbacks send RHP Riley Smith (0-0, 3.60 ERA) to the mound for his first career start. The 26-year-old was impressive as a long reliever last season, giving up just three runs in 18 1/3 innings. He takes the rotation spot of LHP Caleb Smith, who was moved to the bullpen. The Reds will counter with RHP Jeff Hoffman (1-0, 1.80 ERA). 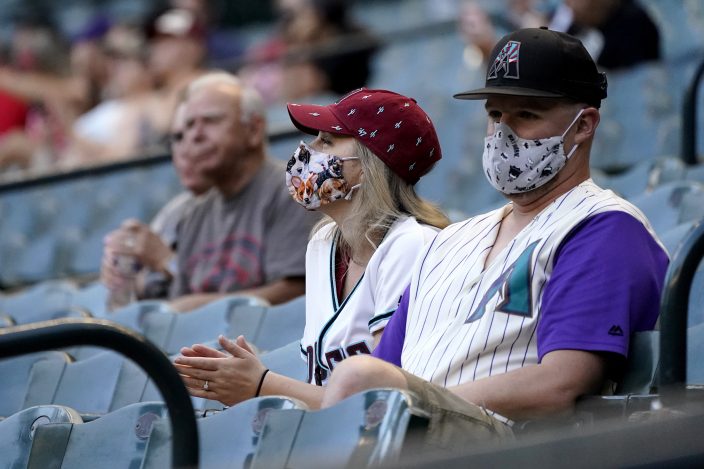 Arizona Diamondbacks fans watch prior to a baseball game against the Cincinnati Reds, Friday, April 9, 2021, in Phoenix. (AP PhotoMatt York) 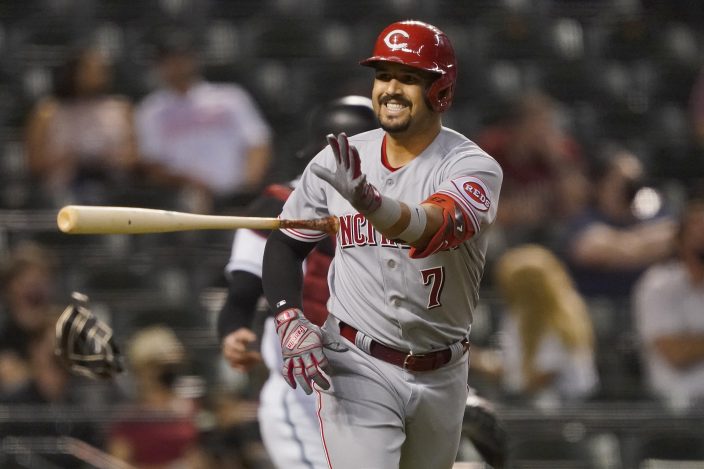 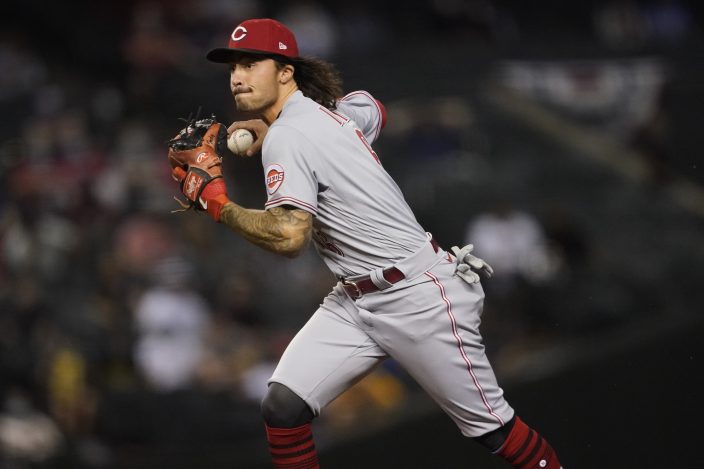 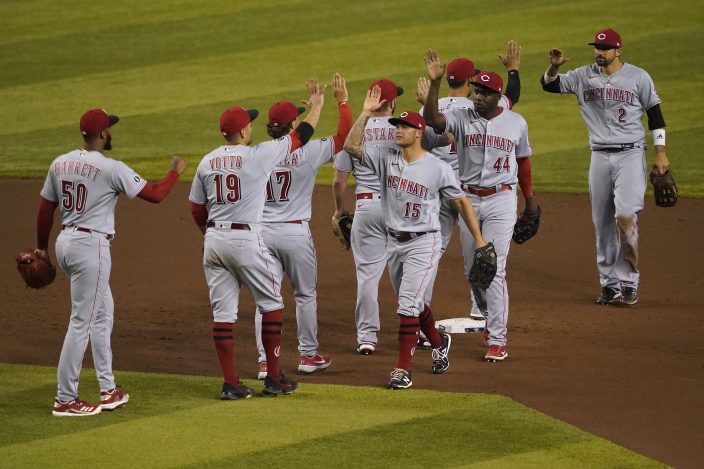 The Cincinnati Reds celebrate after a baseball game against the Arizona Diamondbacks, Friday, April 9, 2021, in Phoenix. The Reds won 6-5 in 10 innings. AP PhotoMatt York)

Trump to speak at North Carolina GOP convention on June ...

Smith solid in 1st start as Diamondbacks cool off Reds, 8-3