At the end of a stressful day, Sara Sidner seeks the friendly wag of a dog's tail. Shaquille Brewster turns to sports on TV, and Julia Jenae talks things out with colleagues.

Each is covering one of the nation's biggest stories, the murder trial of former Minneapolis police Officer Derek Chauvin. Each is also a Black journalist, reporting on an issue of great racial significance and forced — as part of their jobs — to watch video of George Floyd's life ending again and again.

“You really feel the consequences of it,” said Brewster, who at age 28 is delivering repeated reports on NBC News and MSNBC programs. 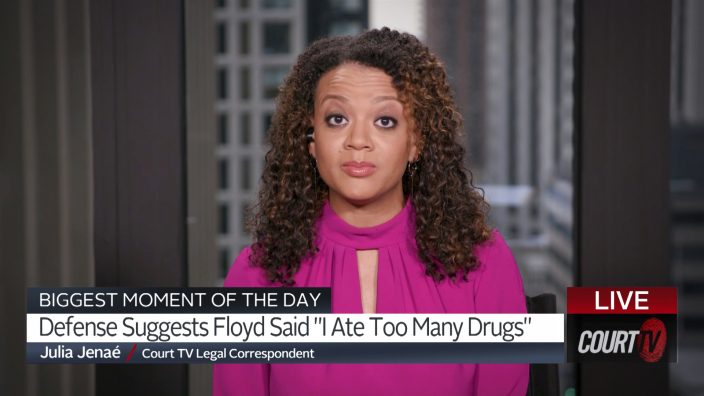 This image released by Court TV shows Legal Correspondent Julia Jenae reporting on the trial of former Minneapolis police officer Derek Chauvin in Minneapolis, Minn., on Wednesday April 7, 2021. Chauvin is charged with murder in the death of George Floyd during an arrest last May in Minneapolis. (Court TV via AP)

The National Association of Black Journalists has taken note of the assignment's potential difficulties, calling on news organizations to make resources available to help employees cope. Reporters covering the trial may be susceptible to trauma tied to their own experiences or previous stories about encounters between police and Black people, said Dorothy Tucker, NABJ president.

For some of the Black journalists covering the trial, it is important to bear witness.

“I had zero trepidation,” said CNN's Sidner. “In fact, I felt it was my absolute duty to do this.” 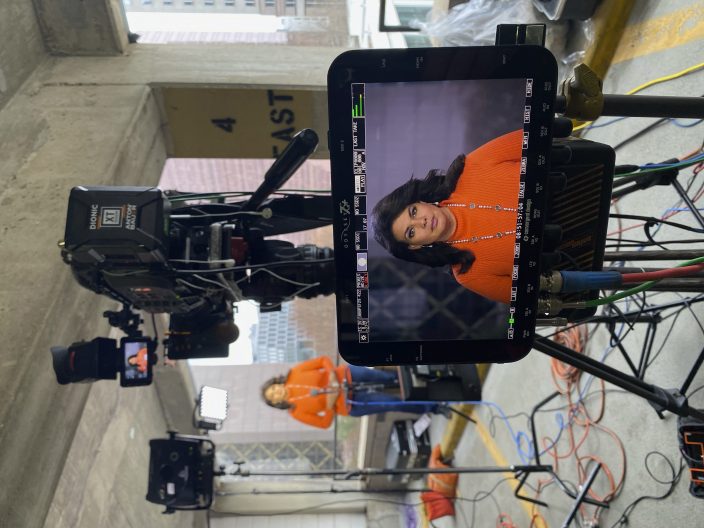 CNN National Correspondent Sara Snider appears on a monitor while reporting on former Officer Derek Chauvin’s murder trial in Minneapolis, Minn., on Thursday, April 8, 2021. Chauvin is charged with murder in the death of George Floyd during an arrest last May in Minneapolis. (Jordon GuzzardoCNN via AP)

The Los Angeles-based Sidner covered the story soon after it broke last May and wants to see it through — even though it will never really end for the people involved or touched by it.

Whenever Court TV’s Janae travels to Minneapolis from her network’s Atlanta headquarters to cover the case, she purposely visits the street corner where Floyd, a Black man, declared dead after the white police officer’s knee was pressed to his neck for more than 9 minutes.

She’s covered many trials but said the magnitude is different this time. 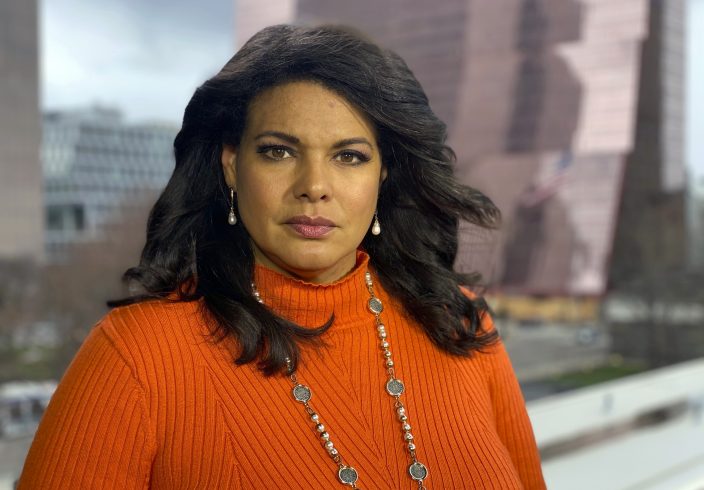 CNN National Correspondent Sara Snider appears in Minneapolis, Minn., while on assignment for the murder trial of former Officer Derek Chauvin on Thursday, April 8, 2021. Chauvin is charged with murder in the death of George Floyd during an arrest last May in Minneapolis. (Jordon GuzzardoCNN via AP)

“I think people want to see a diversity of people covering this story because racial equality is at the heart of it — the heart of the unrest and the heart of what pained people so much,” Janae said.

The journalists not only watch videos of Floyd's death during the trial, they've had to study them. Before the trial, Brewster watched to count how many times Floyd said “I can't breathe,” how many times he called "Mama'' and how long Chauvin's knee was on Floyd's neck.

For the most part, they go into reporter mode, concentrating on observing and figuring out what the day's story is going to be. Mel Reeves, a reporter for the Minnesota Spokesman-Recorder, dismissed as “superfluous” a question about his feelings while covering the trial.

“I guess I have sort of compartmentalized what is happening,” said Brandt Williams, reporter for Minneapolis Public Radio. “It's like when a first responder comes across a scene that is bloody. You can set aside your feelings and do your job.”

Still, Sidner confessed on Twitter that “I'm a wreck y'all” on the day witness Charles McMillian cried on the stand when recalling Floyd's death.

Not everyone can watch. CNN commentator Nia-Malika Henderson, who is not covering the trial, wrote that she avoids it in part because it reminds her of when her mother cried about the Rodney King verdict. Henderson confessed she's never seen the Floyd video.

The Poynter Institute, a journalism think tank, noted recently that mental health experts say repeated exposure to such disturbing scenes can be devastating. Journalists need to be reminded this also applies to them, “maybe especially to you,” and be able to recognize signs of trouble, Poynter said.

“Regardless of the arguments about how he died, you're still watching someone die,” Jenae said. “As humans, that's hard on anyone.”

MPR's Williams noted another sort of compartmentalizing that most white journalists on the story can't relate to.

“I know it's always a possibility that I could be one of those men winding up in a video at the hands of an officer, but it's not at the forefront of my mind,” he said.

A few months ago, Jenae said a viewer complimented her on conducting a fair interview with the brother of Thomas Lane, another former Minneapolis police officer who was fired after being on the scene the day of Floyd's death.

The remark would have insulted her when she was younger, she said. Why wouldn't she conduct a fair interview? Because she's Black and Lane and his brother were white? Skin color was going to determine whether or not she could do her job?

Instead, she accepted it as an expression of empathy.

“What I hear most from viewers is they appreciate that it must be difficult to cover it as an unbiased journalist,” Jenae said.

If he has any bias, it's to make sure that Black people are portrayed as the complex, multi-faceted people they are, much more than the tropes that often show up in popular media, Williams said.

“I've always focused on letting my work speak for itself,” he said.

Reeves, whose newspaper is aimed at a Black audience, describes himself as an activist and doesn't pretend to be unbiased. His dispatch the day of McMillian's testimony read, “If the trial of Derek Chauvin ... was a sporting contest with the score kept at the day's end, the score would be witnesses and Black progressive humanity, one. Chauvin and the system of policing, zero.”

He said his audience simply wants to see an end to police abuse.

Sidner said her Twitter feed has become a forum for viewers to debate the case. It hasn’t been abusive, except for one person who called her an “enemy of the people” because he disagreed with her analysis, she said.

At the end of the day, the journalists want to turn off the news. Brewster wants to laugh with friends, “because I realize I haven't had anything to laugh about that day.”

And those dogs that Sidner looks for to pet? It's to remind her that there is such a thing as unconditional love, she said.