The murder trial of a former Minneapolis police officer charged in George Floyd's death has introduced viewers from around the world to a vast array of defense and prosecution tactics aimed at swaying the jury.

Some strategies and terms that have become part of Derek Chauvin's trial are rare outside criminal courtrooms. The Associated Press has taken closer looks into them to better explain what viewers are seeing and hearing. 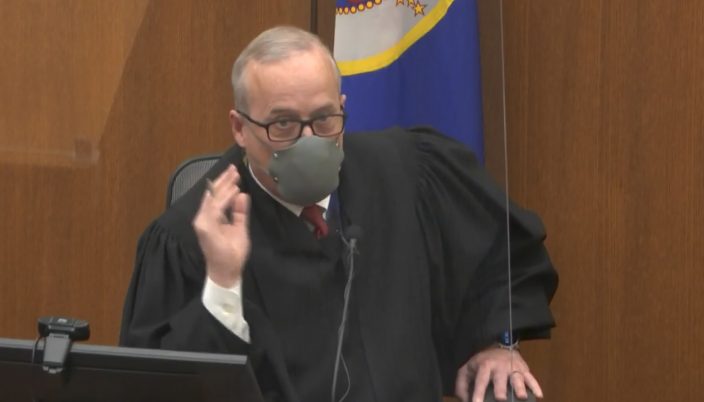 In this image from video, Hennepin County Judge Peter Cahill presides over court Firday, April 9, 2021, in the trial of former Minneapolis police Officer Derek Chauvin at the Hennepin County Courthouse in Minneapolis, Minn. Chauvin is charged in the May 25, 2020 death of George Floyd. (Court TV via AP, Pool)

Video shows Chauvin pressing his knee on Floyd's neck for 9 minutes, 29 seconds last May 25. But defense attorneys are tasked with casting doubt on whether the former officer was directly responsible for the Black man's death. They've sought to argue that other factors, such as drug use, may have killed him.

A medical examiner concluded last year that Floyd’s heart stopped, complicated by how police restrained him and compressed his neck. However, narrowed arteries, high blood pressure, fentanyl intoxication and recent methamphetamine use also were listed on the death certificate as “other contributing conditions.” 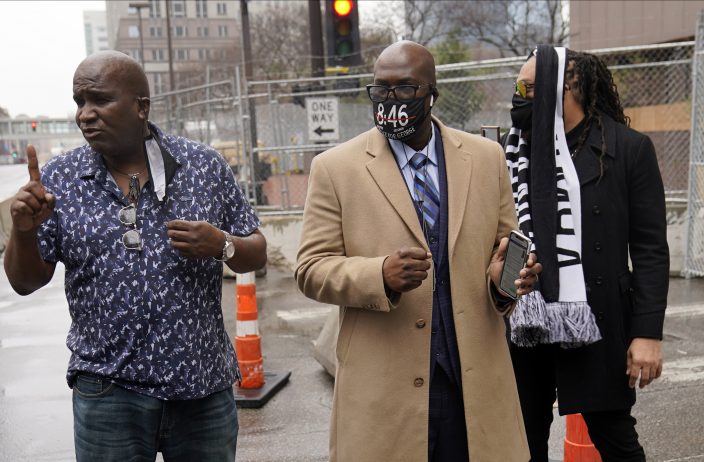 A family security personnel, left, talks to a reporter as Philonise Floyd, brother of George Floyd, listens as Floyd family members arrive at the Hennepin County Government Center, Friday, April 9, 2021, in Minneapolis where testimony continues in the trial of former Minneapolis police officer Derek Chauvin. Chauvin is charged with murder in the death of George Floyd during an arrest last May in Minneapolis. (AP PhotoJim Mone)

Chauvin is charged with second- and third-degree murder and manslaughter.

His lawyer, Eric Nelson, has argued that the officer followed his training and suggested that Floyd died due to use of illegal drugs and existing health conditions.

“I ATE TOO MANY DRUGS” 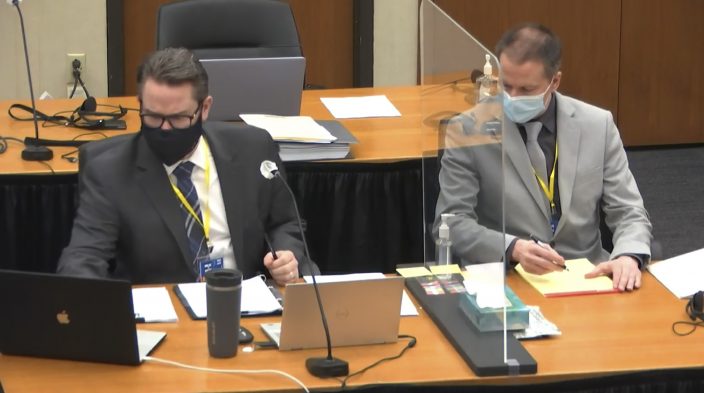 Nelson has tried to play up Floyd’s drug use and sought to show Wednesday tat Floyd yelled “I ate too many drugs” as officers pinned him down.

Playing a short clip from a police body camera video, Nelson asked prosecution witness Jody Stiger, a Los Angeles Police Department sergeant who served as a prosecution use-of-force expert, if he heard Floyd say: “I ate too many drugs.”

“I can’t make that out,” Stiger replied. Nelson later replayed it for senior special agent James Reyerson with the Minnesota Bureau of Criminal Apprehension, who agreed that’s what Floyd appeared to say.

Reyerson replied: “I believe Mr. Floyd was saying, ‘I ain’t do no drugs.’”

Experts and other Minneapolis officers have testified that the force used to subdue and detain Floyd on the pavement was excessive. This past week, jurors were introduced to the concept of “excited delirium,” a term one of the officers at the scene is heard on police body camera asking as a panicked Floyd writhed and claimed to be claustrophobic as officers tried to put him in the squad car.

One Minneapolis officer who trains others in medical care described the term on the stand as a combination of “psychomotor agitation, psychosis, hypothermia, a wide variety of other things you might see in a person or rather bizarre behavior.”

An expert in forensic medicine who works as a police surgeon for the Louisville Metro Police Department in Kentucky and as a professor of emergency medicine at the University of Louisville testified Thursday that Floyd met none of the 10 criteria developed by the American College of Emergency Physicians.

Extensive video evidence from surveillance cameras, cellphones and police body cameras of Floyd’s death may be the most critical part of the case for the defense and prosecution.

Modern courtrooms, like the one where Chauvin is being tried, use such technology as large video screens, projectors and up-to-date software.

Dr. Martin Tobin, a lung and critical care specialist at the Edward Hines Jr. VA Hospital and Loyola University’s medical school in Illinois, used a computer animation to show how Floyd was held down on the pavement. It gave jurors a 360-degree view of where the officers were and what they were doing.

He used a composite of pictures from a bystander video to show Chauvin pressing his knee to Floyd’s neck. Floyd’s respiratory distress was growing at that point as officers held him down on his stomach, with his hands handcuffed behind his back. The images showed how Floyd tried to use his shoulder muscles to draw breath, the doctor said.

Britain yet to decide on Pfizer offer to vaccinate Olym ...

The British government is still de ...