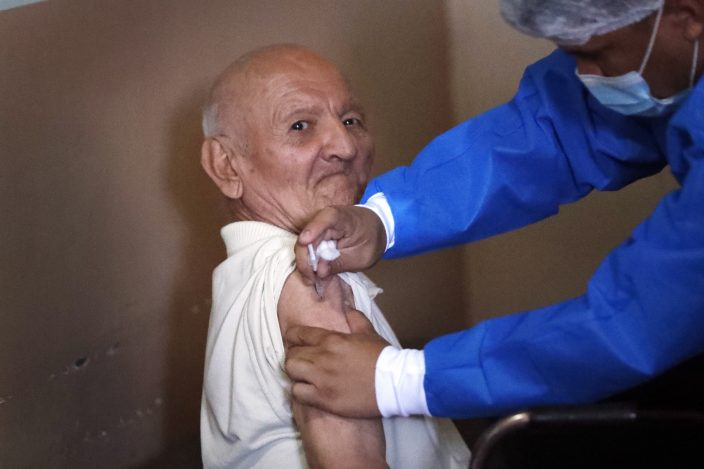 CAPITOL-BREACH — New details from the deadly Capitol riot are in a previously undisclosed document prepared by the Pentagon for internal use and obtained by The Associated Press. The timeline shows that intelligence missteps, tactical errors and bureaucratic delays were eclipsed by the government’s failure to comprehend the scale and intensity of a violent uprising by its own citizens. It also lays bare the inaction by then-President Donald Trump and how that void contributed to a slowed response by the military and law enforcement. By Lisa Mascaro, Ben Fox and Lolita M. Baldor. SENT: 1,750 words, photos. A 950-word version also is available. 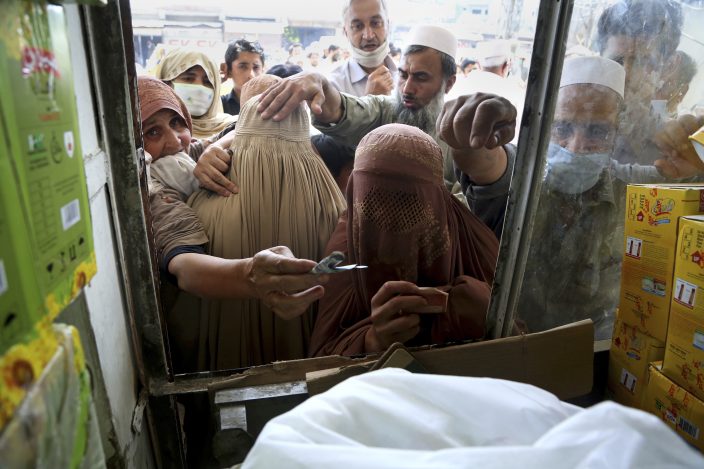 People jostle to buy grocery at a government-run supermarket, which provides special discount prices for the upcoming Muslim fasting month of Ramadan, in Peshawar, Pakistan, Saturday, April 10, 2021. Ramadan begins with the new moon probably next week as Muslims around the world are trying to work out how to maintain the many cherished rituals of Islam's holiest month amid the COVID-19 coronavirus pandemic.(AP PhotoMuhammad Ramadan)

VIRUS OUTBREAK — As many as 60 countries, including some of the world’s poorest, might be stalled at the first shots of their coronavirus vaccinations because nearly all deliveries through the global program intended to help them are blocked until as late as June. By Lori Hinnant and Maria Cheng. SENT: 1,090 words, photos.

VIRUS OUTBREAK-VACCINE-HESITANCY — More Black Americans say they are open to taking the coronavirus vaccine. The shift in public opinion comes amid nationwide efforts to overcome a shared historical distrust of science and government. A poll by The Associated Press-NORC Center for Public Affairs Research in late March found about 24% of Black American adults said they will probably or definitely not get vaccinated. That’s down from 41% in January. By Russ Bynum and Annie Ma. SENT: 900 words, photos.

TRUMP-COMMUNICATION — Former President Donald Trump insists he’s enjoying his life off Twitter. But since he was barred from major social media channels after helping incite the Jan. 6 insurrection at the U.S. Capitol, his power to shape the national conversation is being tested. He still connects with his supporters through emails and appearances on Fox News and other conservative outlets. But the sway over American life he once enjoyed appears to be eroding — at least for now. By Jill Colvin. SENT: 990 words, photos.

VIRUS OUTBREAK-GOVERNORS — State lawmakers across the U.S. are taking actions to limit the emergency powers of governors — not just in the current pandemic, but for any future emergencies. The pushback is coming primarily from Republican lawmakers but is not entirely partisan. By David A. Lieb. SENT: 1,145 words, photos. Eds: This story has moved as the Sunday Spotlight.

MEDIA-CHAUVIN-BLACK-JOURNALISTS — Covering the trial of ex-Minneapolis police Officer Derek Chauvin in the death of George Floyd is a particularly intense experience for Black journalists. They face the emotionally draining experience of watching, over and over, the video of a Black man who died following an encounter with a white police officer. SENT: 1,015 words, photos. With GEORGE FLOYD-OFFICER-EXPLAINING THE TRIAL — A look at the strategies and terms being used in the trial. SENT: 670 words, photos.

BRITAIN-PRINCE-PHILIP — Britain’s Prince Charles says the royal family is “deeply grateful’’ for the outpouring of support they’ve received following the death of his father, Prince Philip. The 99-year-old Philip died Friday at Windsor Castle, where a ceremonial royal funeral is planned for April 17. Prince Harry, one of Philip’s grandsons who now lives in California, will attend. By Danica Kirka. SENT: 850 words, photos.

CRENSHAW-EYE-SURGERY — Rep. Dan Crenshaw, a Texas Republican, said that he has undergone eye surgery and will be virtually sightless for a month. SENT: 150 words, photo.

BRITAIN-PRINCE-PHILIP-TV — The U.K.’s national broadcaster has received so many complaints that its coverage of the death of Prince Philip was excessive that it set up a special website page for viewers to register their objections. SENT: 425 words, photo.

MURDER-CHARGES-DROPPED — A prosecutor says he won’t retry a Georgia couple for their newborn daughter’s death more than a decade ago after the state’s highest court overturned their murder convictions. SENT: 400 words.

VIRUS-OUTBREAK-MIDEAST — Iran began a 10-day lockdown amid a fourth wave of coronavirus infections, state TV reported, a worrisome trend after more than a year of the country battling the Middle East’s worst outbreak. SENT: 600 words, photos.

CULTURE-WARS-REPUBLICAN STATES — Republican state legislators have been in overdrive on so-called culture-war legislation, from abortion limits and expanded gun rights to restrictions on the rights of transgender youth and more. While one Republican governor has offered a rare rebuke of that effort, the push comes as the party tries to portray Democrats as out of touch with average Americans. SENT: 1,240 words, photos.

VOTING LAW-GEORGIA — Georgia’s Republican governor steps up his attack on Major League Baseball’s decision to pull this summer’s All-Star Game from the state in response to a sweeping new voting law, saying the move politicized the sport and would hurt minority-owned businesses. SENT: 410 words, photos.

ST. VINCENT-VOLCANO — Extremely heavy ashfall rained down across the eastern Caribbean island of St. Vincent and a strong sulfur smell enveloped communities a day after a powerful explosion at La Soufriere volcano uprooted the lives of thousands of people who evacuated their homes under government orders. SENT: 600 words, photos.

IRAN-NUCLEAR — Iran said it has begun mechanical tests on its newest advanced nuclear centrifuge, even as the five world powers that remain in a foundering 2015 nuclear deal with Iran attempt to bring the U.S. back into the agreement. SENT: 560 words, photos.

INDONESIA-EARTHQUAKE — A strong earthquake killed at least eight people, injured 23 others and damaged more than 300 buildings on Indonesia’s main island of Java and was also felt on the tourist hotspot of Bali, officials said. No tsunami warnings were posted. SENT: 405 words, photos.

FEMALE-FIREFIGHTERS — Five women who made history by working an entire firefighting shift with no men are still thriving at their fire department in Florida months later. SENT: 835 words, photos.

JEFFREY EPSTEIN-ASSOCIATE -- Hoping to preserve a July trial date, prosecutors are defending a late-hour expansion of charges against Ghislaine Maxwell by saying they developed when a woman spoke after Maxwell’s arrest about her abuse at the hands of Jeffrey Epstein in the early 2000s. UPCOMING: 500 words by 4 p.m., photos.

ROCHESTER-EXPLOSIONS-ARREST — A Rochester man has been charged with setting off explosives in another man’s yard and sending letters to neighbors warning that he planned to continue doing it. SENT: 320 words.

EMIRATES-ASTRONAUTS — The United Arab Emirates has named the next two astronauts in its space program, including the country’s first female astronaut. SENT: 310 words, photo.

AUSTRIA-OBIT-JOHN NAISBITT — The American author John Naisbitt, whose 1982 bestselling book Megatrends was published in dozens of countries, has died at 92. SENT: 120 words.

BEATTS REMEMBERED — A fellow writer from the early days of “Saturday Night Live” remembers Anne Beatts, who died Wednesday. Female comedy writers were rare in the ’70s, and Rosie Shuster says getting their ideas even listened to left their heads scarred “from bashing them against the glass ceiling.” But Beatts was not afraid to demand attention and respect. SENT: 590 words, photo.

GLF--MASTERS — Justin Rose leads by a stroke going into the third round at the Masters, with Jordan Spieth and Justin Thomas among the major champions lurking. UPCOMING: 800 words, photos by 8 p.m.

The first court test of whether lo ...