After thunderstorms rumbled through Augusta National, the treacherous greens suddenly got a lot more inviting.

Only one player really took advantage of the soggy turn in the weather Saturday.

While Japan's Hideki Matsuyama surged to a four-stroke lead in the third round of the Masters, a bunch of other expected challengers got stuck in neutral or fell by the wayside. 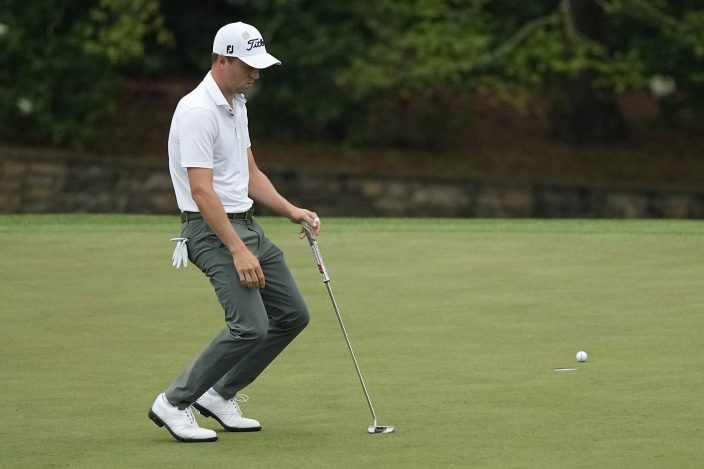 Justin Thomas reacts to his missed par putt on the 11th hole during the third round of the Masters golf tournament on Saturday, April 10, 2021, in Augusta, Ga. (AP PhotoDavid J. Phillip)

Justin Rose, who led after each of the first two days, had to scramble mightily just to manage his second straight 72. Jordan Spieth couldn't do any better, countering brilliant saves with sloppy mistakes to wind up with an even-par round as well. Perennial contender Tony Finau barely got any TV time with a middling 73.

Then there was Justin Thomas, who totally fell apart with a triple-bogey 8 at the 13th that sent him tumbling to a 75. Just three shots back at the start of play Saturday, he'll go to the final round a whopping 10 shots behind Matsuyama.

“It was two rounds,” Thomas said. “I was playing great before the delay, and then I didn’t afterwards. I mean, it’s just a shame. I was really playing well. The golf course was playing very difficult, and I just couldn’t adjust to the green speeds when I got back out.” 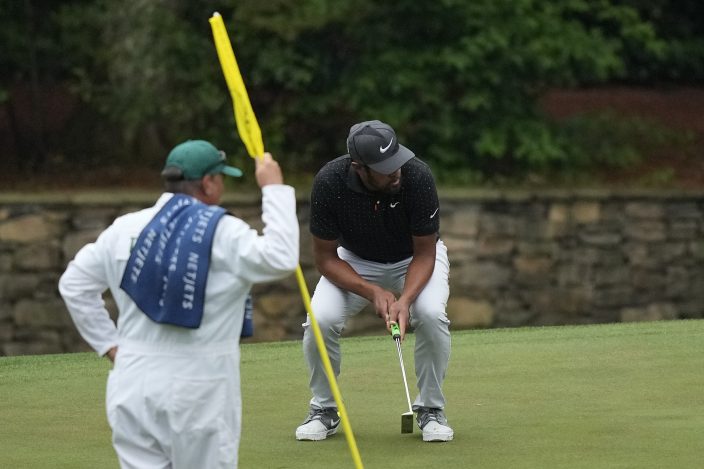 Tony Finau reacts after missing a birdie putt on the 11th hole during the third round of the Masters golf tournament on Saturday, April 10, 2021, in Augusta, Ga. (AP PhotoDavid J. Phillip)

Play was halted for 78 minutes by a fast-moving line of thunderstorms, transforming a course that was playing as tough as anybody could remember before getting its first dousing of the week.

Everyone had to adjust. One guy did it a lot better than everyone else.

Matsuyama thrived in conditions that made it easier to attack the greens and be more aggressive with putts. He seized the lead all to himself with an eagle at the 15th, added birdies at the next two holes and finished with the best round of his Masters career, a bogey-free, 7-under 65. 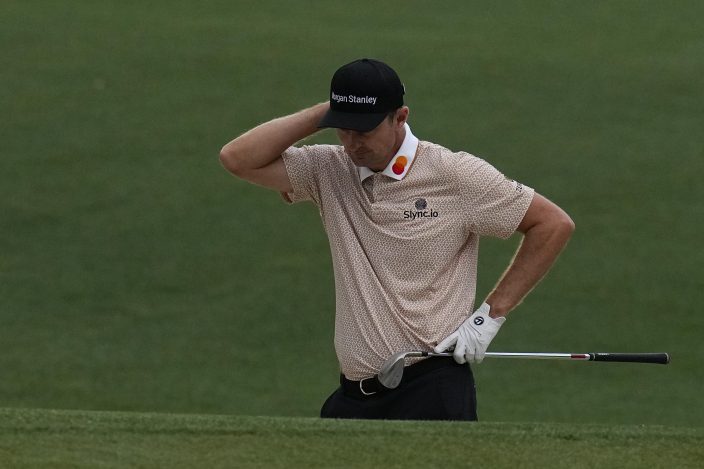 Justin Rose, of England, reacts after his chip shot out of a bunker on the 16th hole during the third round of the Masters golf tournament on Saturday, April 10, 2021, in Augusta, Ga. (AP PhotoGregory Bull)

Then there was Thomas, who never got a feel for how the course changed, though it wasn't only the reduced speed of the greens that gave him trouble.

After driving into the trees right of the 13th fairway, he appeared to bail himself out with a brilliant escape that stopped short of creek flowing in front of the green, a mere 80 yards from on the flagstick.

But Thomas badly flubbed his pitch, the ball rolling back into the stream that feeds into Rae's Creek. It was last seen bobbing toward the Savannah River. 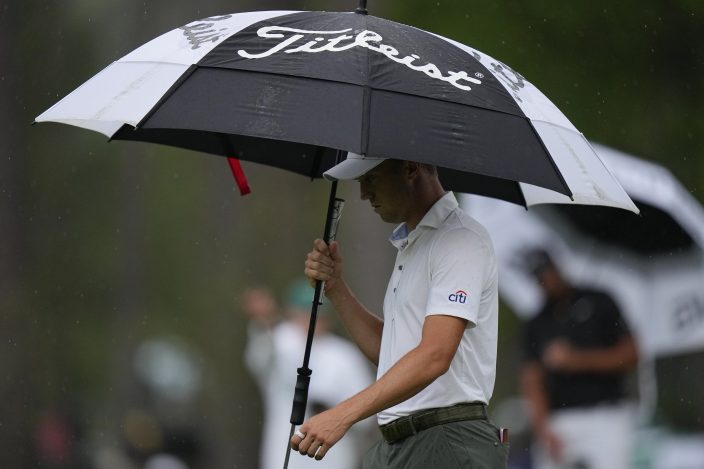 Justin Thomas protects himself from the rain as we walks on the 15th hole during the third round of the Masters golf tournament on Saturday, April 10, 2021, in Augusta, Ga. (AP PhotoMatt Slocum)

Skittish after that mistake, Thomas took his penalty drop and launched one 35 feet past the cup. Befuddled by greens that had turned squishy after playing like a dining room table all week, he left the bogey putt 8 feet short, and missed the next one too.

“I just have to forget about it and try to do something historic tomorrow,” Thomas said.

Finau started the day only three shots off the lead and hoped to position himself for the most significant victory of his career. 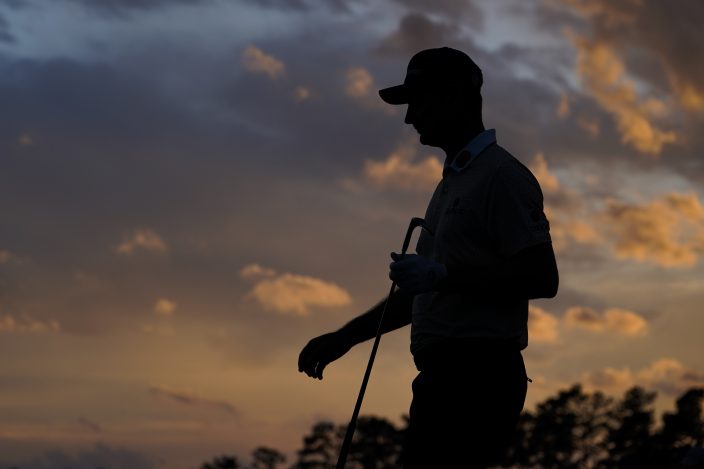 Justin Rose, of England, walks on the 18th green during the third round of the Masters golf tournament on Saturday, April 10, 2021, in Augusta, Ga. (AP PhotoDavid J. Phillip)

Even though he's been a fixture in the world top 20, played well in the majors and represented the U.S. in both the Ryder Cup and Presidents Cup, Finau hasn't won since his lone PGA Tour victory in 2016 at a minor event in Puerto Rico.

He never got anything going Saturday, bogeying the first hole, slogging through a stretch of nine straight pars in the middle of the round, and taking another bogey at the 17th to leave him eight shots behind Matsuyama.

Not even a FaceTime call from Super Bowl-winning quarterback Tom Brady during the weather delay did much to inspire Finau.

“He said he was surprised we stopped. He said, ‘In the NFL, when it rains we don’t stop,’” Finau said. “We had a good laugh about that. He was giving me some crap about the weather.”

Maybe Brady should have given Finau some tips about the weather. The golfer found himself in the same predicament as Thomas, his playing partner.

“We talked about it pretty much every hole coming in, just how much different it’s playing, slower, more receptive," Finau said. “It was hard to adjust, but everybody has to do it. Unfortunately, J.T. and I didn’t do a very good job of that.”

Neither did Spieth, the 2015 Masters champion and one of the favorites this week.

After playing the back nine in a cumulative 6 under through the first two rounds, Spieth plodded to a 36 after the turn Saturday to slide six shots off the lead.

On a day for adjustments, some guys seemed to get stuck in their same old routine.