Trent made 17 of 19 field goals, including shooting 7 of 9 from 3-point range, and went 3 of 3 from the foul line in 33 dynamic minutes. The third-year pro was acquired from Portland with Rodney Hood on March 25 for Norman Powell.

The Raptors, who built an 84-46 lead late in the second quarter, were without their top three scorers in Pascal Siakam (rest), Fred VanVleet (left hip flexor strain) and Kyle Lowry (right foot infection), who are averaging a combined 57.5 points. 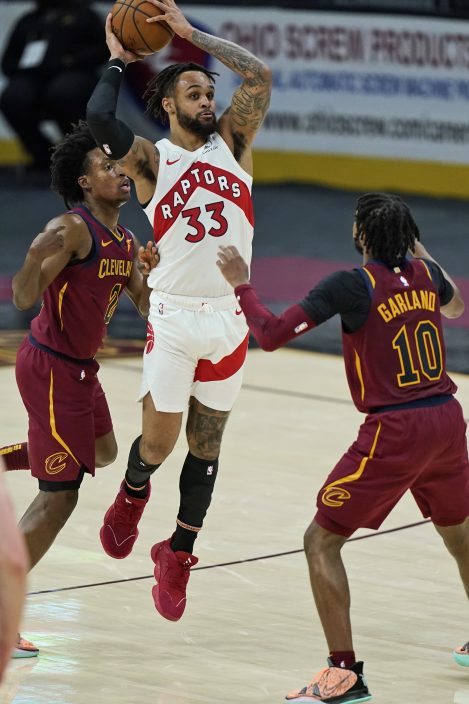 Collin Sexton scored 29 points and Darius Garland had 19 points and eight assists for Cleveland, whose starters didn’t grab a rebound until 5:16 remained in the second quarter. Isaiah Hartenstein had 12 points, eight boards and six assists.

Trent scored 25 points and Anunoby had all 15 of his points in the opening half — combining to make 14 of 16 field goals and 8 of 9 3-pointers — as Toronto went into the break up 87-54. The Raptors set the record for a Cavaliers opponent for points in a half. 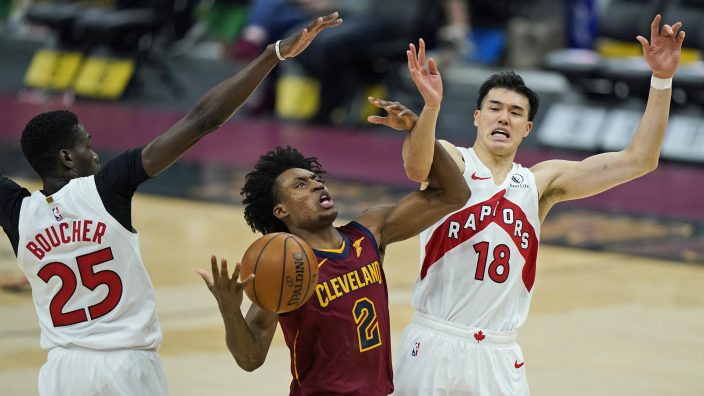 Toronto notched its season high in a quarter in leading 47-26 after the first, capped by Watanabe's 3-pointer at the buzzer. All nine Raptors who played in the period had at least one basket.

Toronto wraps up a stretch of nine games in 15 days Sunday at New York. Coach Nick Nurse said Siakam will play and Lowry could return against the Knicks. 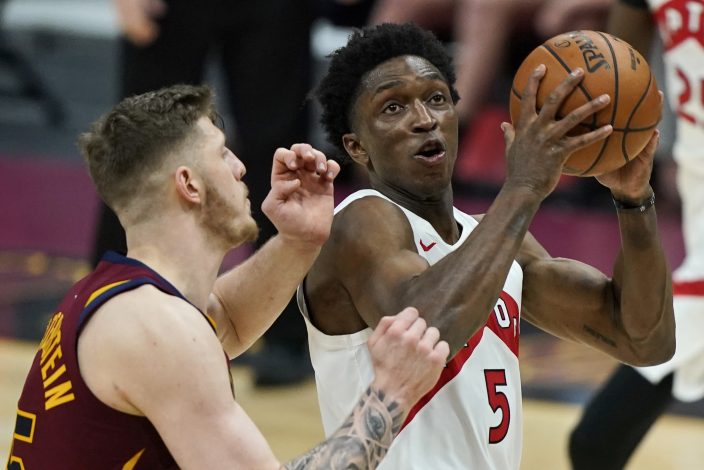 Toronto Raptors' Stanley Johnson, right, drives to the basket against Cleveland Cavaliers Isaiah Hartenstein in the second half of an NBA basketball game, Saturday, April 10, 2021, in Cleveland. (AP PhotoTony Dejak)

Raptors: VanVleet sat out his fourth straight game and Lowry missed his seventh in a row. Toronto last played with its starting backcourt on March 29 at Detroit. ... G Jalen Harris (right hip pointer) and G Paul Watson Jr. (COVID-19 protocols) also were inactive. ... C Khem Birch, who played for Nurse on the Canadian national team in 2019, was signed before the game and will join the team in New York. 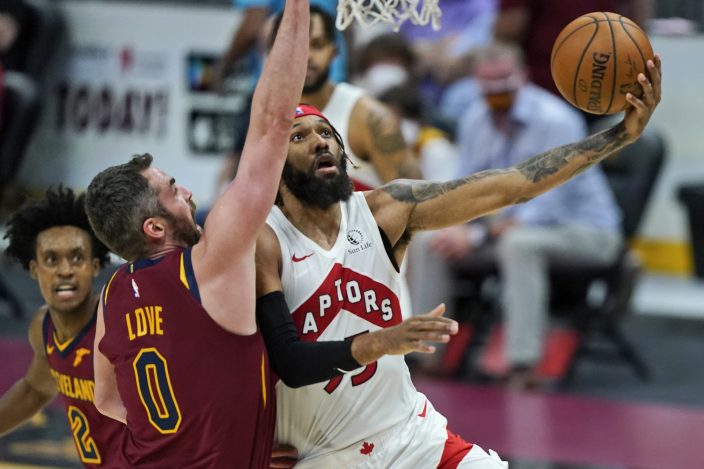 Toronto Raptors' DeAndre' Bembry, right, drives to the basket against Cleveland Cavaliers' Kevin Love in the second half of an NBA basketball game, Saturday, April 10, 2021, in Cleveland. (AP PhotoTony Dejak)

Cavaliers C Kevin Love, who remains on a minutes restriction, scored 18 points in his fifth game back from a three-month absence with a strained right calf. The three-time All-Star is averaging 13.6 points and 7.2 rebounds over 22.8 minutes since returning. “Kevin takes so much pressure off everyone else because teams have to game plan for him,” Bickerstaff said. “He’s such an efficient player.” 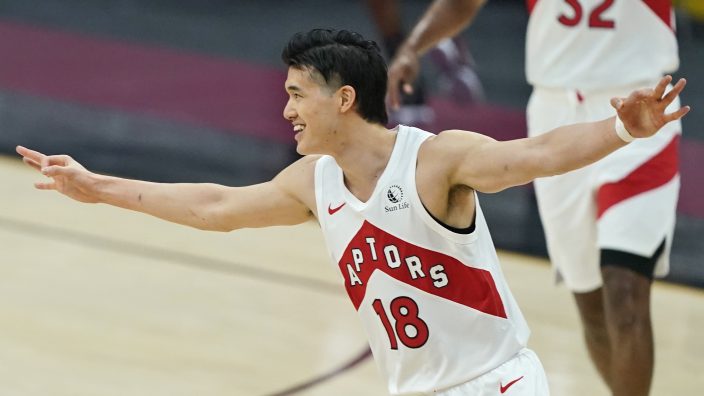 Toronto Raptors' Yuta Watanabe celebrates a three-point basket in the first half of an NBA basketball game against the Cleveland Cavaliers, Saturday, April 10, 2021, in Cleveland. (AP PhotoTony Dejak)

Cavaliers: Host New Orleans on Sunday. Cleveland has lost five in a row to the Pelicans, including a 116-82 road drubbing in their only meeting last season. 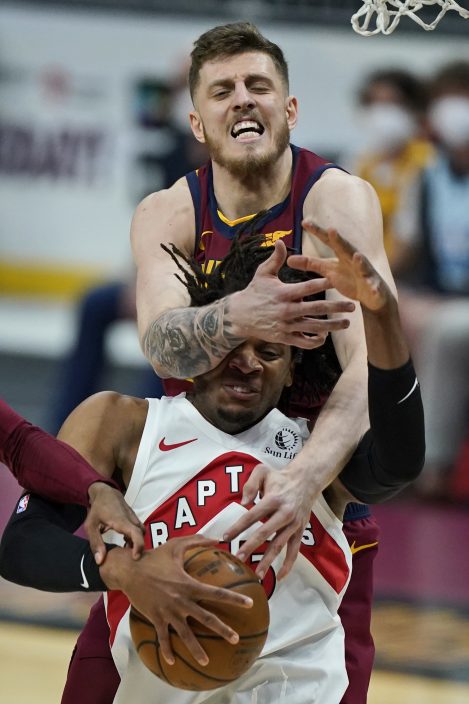 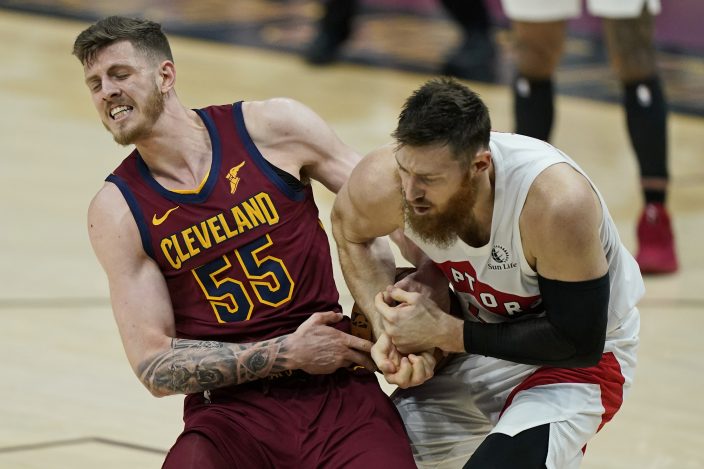 Cleveland Cavaliers Isaiah Hartenstein, left, and Toronto Raptors' Aron Baynes battle for the ball in the second half of an NBA basketball game, Saturday, April 10, 2021, in Cleveland. (AP PhotoTony Dejak)