Riley Smith pitched six effective innings in his first career start, Tim Locastro had four hits and the Arizona Diamondbacks cooled off the Cincinnati Reds by beating them 8-3 on Saturday night.

Smith (1-0) was impressive, giving up just two runs on eight hits against a Reds team that had won six in a row. The 26-year-old right-hander took the rotation spot of lefty Caleb Smith, who was moved to the bullpen after struggling during his first outing.

Riley Smith navigated Cincinnati's hot lineup with relative ease. His only trouble came in the second when the first four batters reached base on a walk, double and two singles, including run-scoring hits by Nick Senzel and Jonathan India. 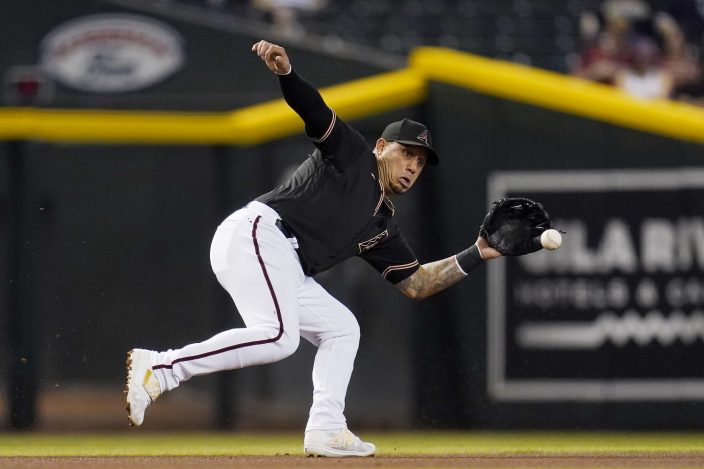 Arizona Diamondbacks third baseman Asdrubal Cabrera reaches out to field a grounder hit by Cincinnati Reds' Nick Castellanos, before throwing to first base for the out during the first inning of a baseball game Saturday, April 10, 2021, in Phoenix. (AP PhotoRoss D. Franklin)

Smith was able to limit the damage by retiring Tucker Barnhart and pitcher Jeff Hoffman for the final two outs. He struck out two and walked one.

The Diamondbacks — who came in hitting just .205 through eight games — broke the game open with a five-run fifth. Three runs scored on Stephen Vogt's two-out single. Two scored easily and then Eduardo Escobar was able to come around all the way from first when Senzel slipped in center field while trying to pick up the ball.

Escobar added his third homer of the season on a solo shot in the seventh, clearing the 413-foot sign in center. He's homered in three straight games for the second time in his career. Asdrubal Cabrera hit his second homer of the year. 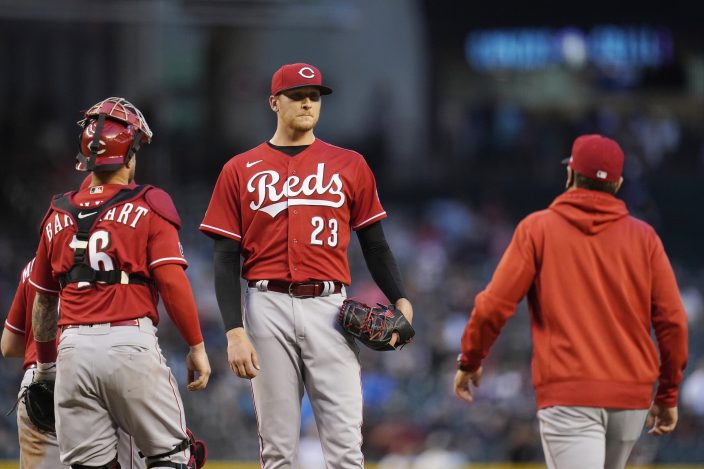 Cincinnati Reds manager David Bell, right, arrives on the mound to remove starting pitcher Jeff Hoffman (23) from the baseball game as Reds catcher Tucker Barnhart stands near the mound during the fifth inning against the Arizona Diamondbacks on Saturday, April 10, 2021, in Phoenix. (AP PhotoRoss D. Franklin)

Locastro was a catalyst all night in the leadoff spot with four singles, two runs scored and a stolen base. His playing time in center field has increased after Ketel Marte recently went on the injured list with a strained hamstring.

Hoffman (1-1) took the loss, giving up three runs over 4 1/3 innings. Eugenio Suárez hit his second homer of the season, a solo shot in the eighth. 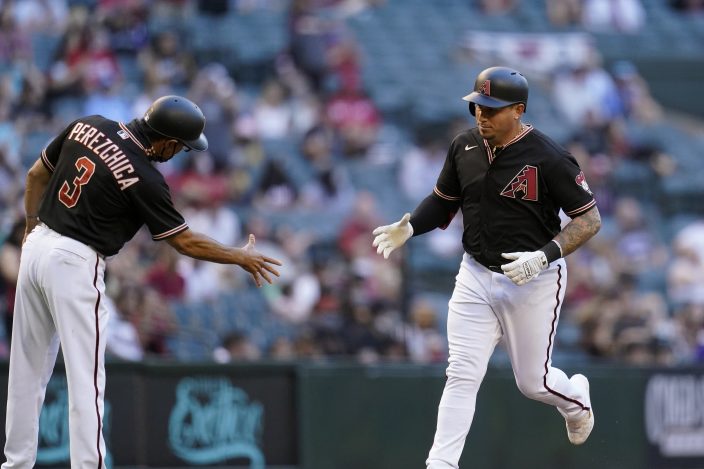 The Reds lost, but they kept hitting. Cincinnati entered batting a big league-best .305 and pounded out 12 hits. 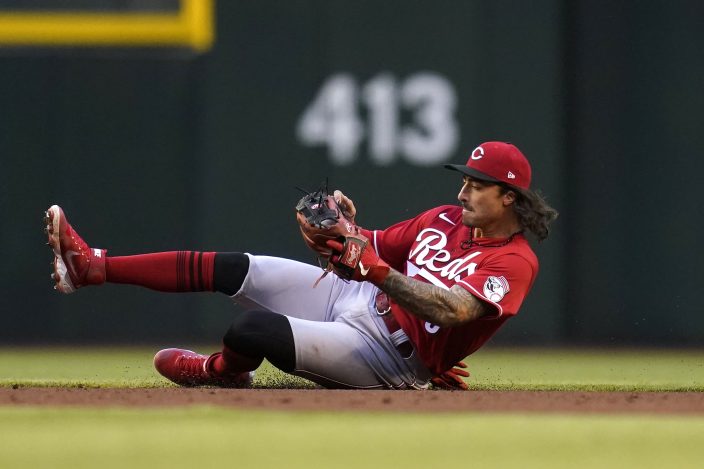 Cincinnati Reds second baseman Jonathan India makes a diving grab on a grounder hit by Arizona Diamondbacks' Nick Ahmed, before throwing to first base for the out during the fourth inning of a baseball game Saturday, April 10, 2021, in Phoenix. (AP PhotoRoss D. Franklin)

Hall of Famer Tim Raines stole 27 straight bases without getting thrown out to start his career from 1979-81.

It wasn't all good for Locastro on the basepaths, though. He was picked off in the first inning when his hand slipped off the bag while diving back to first.

Reds: OF Jesse Winker didn't start, one day after leaving the game with calf cramps.

Diamondbacks: SS Nick Ahmed was back in the lineup after missing the season's first eight games. The two-time Gold Glove winner was dealing with knee soreness during spring training. ... Arizona manager Torey Lovullo said he hasn't decided who Tuesday's starting pitcher will be against the Oakland A's. He acknowledged one possibility is RHP Zac Gallen, who has been on the injured list with a hairline fracture in his right forearm.